Monday was the hectic last day of the 2013 Alabama Legislative Session and a lot of legislation was passed during that 15 hour day. Many state legislators commented on Facebook about that last hectic day.

Senator Bryan Taylor (R) from Prattville said, “I had a pretty good finish to the 2013 legislative session tonight. I passed HB1 — Caylee’s Law — to make it a crime for a parent to fail to report a missing child; HB14, the Joel Willmore Act, to require public notice whenever an inmate escapes prison; and SB445 to close loopholes in campaign finance laws, increase disclosure, and strengthen enforceability of those laws. I also passed important local bills for Prattville, Pike County, Crenshaw County, and Butler County. I passed a local bill for Wetumpka, but the House failed to give it final passage and send it to the governor.”

Rep. Paul Beckman (R) from Prattville said on Facebook, “The last day of the session is over. HB 14 passed after 3 years of work. This bill cleared the Senate a few seconds before midnight. This was the Joey Wilmore bill which sent notice to the surrounding area of an escape convict. Senator Taylor pulled a rabbit out of his hat at the last second. There was help from a lot of unsung heroes that made this bill possible. Thanks to everyone who helped. This bill will save lives. SINE DIE.”

Senator Harri Anne Smith (I) from Slocumb said, “LAST DAY OF THE REGULAR SESSION. IT IS 11:30 AND ALL lOCAL BILLS THAT WERE OUT OF COMMITTEE HAVE BEEN PASSED FOR OUR AREA. YEA! Thanks to all the local leaders for working with us this session.”

Rep. Dickie Drake (R) from Leeds said, “9:30 pm Passed SB260 out of the House. Will go to a vote of the people to authorize a 50 Million dollar bond issue to plan, renovate, and construct National Guard Armories across the State. Alabama National Guard annual payroll is 327 million dollars and Guard employees paid 16 million dollars in State income taxes in 2012. For the record, 51% of Alabama National Guard Armories are over 30 years old. Inadequate Armory revitalization negatively impacts recruiting, retention, and readiness. Thank you to Senator Whatley for bringing the bill and Representative Mark Tuggle for moving the bill through the house.”

Rep. Paul John DeMarco (R) from Homewood said, “Legislation that will allow for the approval of distinctive license plates for out-of-state colleges and universities has passed the Alabama Legislature and now goes to the governor for his signature.”

Alabama Commissioner of Agriculture and Industries John McMillan (R) said, “Many thanks to Alabama legislators for passage of SB247, the Farmers Market Authority Consolidation bill that now awaits the Governor’s signature. Special thanks to bill sponsors Sen. Bobby Singleton of Greensboro and Rep. Chad Fincher of Semmes. FMA will join the Dept. of Ag & Industries.”

Sen. Phil Williams (R) from Rainbow City said, “As the Legislative Session wound down I was proud that one of the Bill’s that I sponsored for Veterans reached final passage! This Bill will allow a veteran to received credit for military training and skills toward a civilian equivalent certification. This creates job opportunities for vets, reduces the need for redundant training, and signals Alabama’s commitment to honor veterans during and after their service years!” 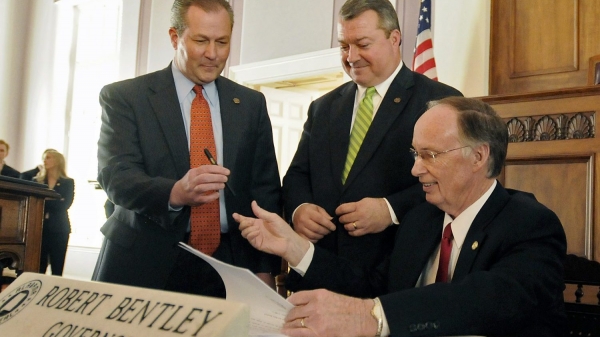 Sometime after 10 a.m. today, the Alabama Senate will take up HB317, a bill to exempt a specific class of individuals from the state’s...