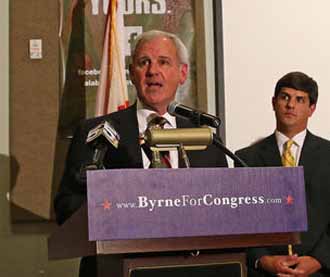 Former State Senator and candidate for Governor Bradley Byrne (R) from Montrose announced on Tuesday that he will run for the Congressional District One seat being vacated by the retirement of Congressman Jo Bonner (R) from Mobile made a formal announcement at 2:00 pm on Tuesday.

Sen. Byrne said in a written statement, “There is little doubt our nation and our region face many challenges but we also enjoy abundant opportunities. I run for this office as a person who truly seeks real solutions to our problems and I am more than excited to have an opportunity. I intend to be a part of the effort to realize the promise of our nation and our area.”

Byrne continued, “I ask the good people of southwest Alabama, from Thomasville and Grove Hill to Monroeville, from Chatom to Atmore and Brewton, from Gulf Shores and Orange Beach to Foley and central Baldwin, from the Eastern Shore to Bay Minette, from Saraland and Chickasaw to Semmes, from Dauphin Island and Bayou la Batre to Mobile, to give me the opportunity once again to serve you.I promise to give you my all – and, working together, we can build a better America and a bright future for us and for future generations.”

Bradley Byrne served as chancellor of the Alabama Two Year College System from 2007 until his resignation in 2009 to run for the 2010 Republican nomination for Governor of Alabama. Byrne had the most votes in a crowded Republican Primary field, but lost the Republican Primary runoff to state Representative Robert Bentley from Tuscaloosa. Bentley went on to easily defeat Alabama Agriculture Commissioner Ron Sparks (D) from Fort Payne. Byrne was targeted by $4 million worth of negative advertising funded by the Alabama Education Association (AEA) who were angry over his handling of the two year college system.

Byrne was a member of the Alabama Senate from 2003 to 2007. He is a graduate of Duke and has a law degree from the University of Alabama. Byrne has also served on the state school board. Byrne was first elected in 1994 as a Democrat but later switched to the Republican Party due to the increasingly liberal direction that the Democratic Party was moving.

Byrne will face a crowded Republican field that already includes columnist Quin Hillyer, state Representative Randy Davis, and former 2012 Bonner challenger Dean Young. Bonner is set to retire in August and then a special election will be set for the fall.

To learn more about the Byrne campaign visit his website: