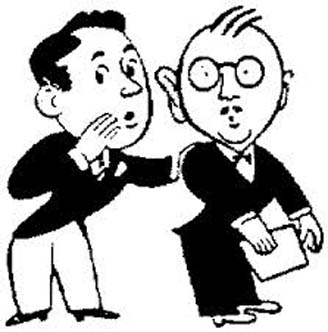 Rumors concerning an alleged affair between Attorney General Luther Strange and his former campaign manager Jessica Garrison, have recently been published as fact by at least one blog and a thinly veiled opinion in one weekly newspaper.

Last week, Garrison filed a defamation lawsuit against the website Legal Schnauzer, its owner, Roger Shuler and others who have yet to be identified.

In The Art of Truth-Telling about Authoritarian Rule, a passage states, “Some rumors are entirely true. Others contain grains of truth; still others contain none at all.”

The passage goes on to point out that many times rumors circulate because, “people are trying to get to the bottom of a matter.”

Other times, rumors are authored solely to cause harm, especially when it involves the powerful. Such it is with this case: The alleged Strange/Garrison affair.

Many months ago, the Alabama Political Reporter looked at the so-called evidence being offered as proof of illicit behavior and potential wrong doing by the pair. At best, it appeared to be circumstantial—a loose connection of information that could have multiple explanations. After investigating what was factually available, our staff concluded that there was nothing to report unless more information surfaced. On its face the available body of facts appeared to be speculation or worse concocted to damage Strange and Garrison.

Those of us who report on politics must consider rumors. Many times a rumor will lead to an investigation that eventually exposes public corruption; ergo, the old adage, “Where there’s smoke, there’s fire.” However, in the case of Strange and his former campaign manager, we have never been able to find smoke, much less any fire. In this instance, the rumors appeared to be more the product of the Attorney General’s enemies.

Garrison must be commended for taking bold steps to protect herself and her son from these vicious and unfounded attacks. Going forward with a lawsuit of this nature takes courage.

Many painful things can come out in the discovery phase of a defamation lawsuit. Most people shy away from filing them for that very reason. But Garrison, so convinced that truth is the only defense against lies, has charged forward, knowing that more unpleasantness awaits her.

Garrison has a young son who will one day undoubtedly stumble upon the salacious things written about him and his mother. She will have to explain what happened. I believe Garrison is the type of mother who will be able to look her son in the eyes, hold back the tears and say, “I fought for you.”

As for Strange, I am sure his advisers have suggested that he remain silent, because the story has not yet been carried by the mainstream media. However, in today’s political environment, the traditional media is usually far behind the investigative work being conduct by online news outlets.

Strange has powerful enemies who are happy to see a scandal attached to his name. No doubt many of his political adversaries are willing to work covertly to supply the so-called facts.

Shuler has done some very good work at Legal Schnauzer and it would be a loss if his voice were missing from the legal and political discussions of the day.

However, he has on at least two occasions disparaged the character of women with accusations of affairs illegitimate children and abortions without even a scrap of proof.

Perhaps, as antiquated as it may sounds to some such accusations against women, unless accompany by irrefutable facts, should be off limits. As for children, charges of their illegitimacy without DNA proof is despicable. And even armed with such solid proof should be handled with the most delicate of hands.

Even as caustic as our world has become, there are still some things that should be handled with care.

I feel a deep sense of sadness that Jessica Garrison and her son have been caught-up in these machinations of political intrigue. It is questionable whether Garrison’s life reaches the level of “public figure,” her son’s certainly does not.

Perhaps, the boy will never hear of these sordid accusations. But if he does, I hope he will realize the courage it took for his mother to stand against those who have tried to cause her harm.