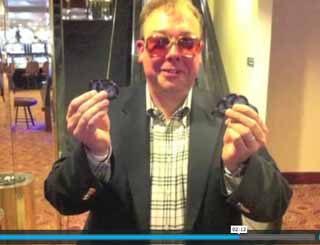 One of the items on the agenda is renewal of the consulting contract for David Azbell.

Azbell is a political operative with a history of sexual harassment in the work place as well as producing semi-pornographic videos extolling the virtues of Las Vegas and of mocking Christmas.

He is also the brains behind Speaker Mike Hubbard’s vanity publication “Storming the Statehouse.”

Azbell receives $96,000 a year in taxpayer money to “provide strategic communications and public relations services to members of the House Majority Caucus,” according to the selling points on the contract proposal.

While Communications Director to former-Governor Bob Riley, Azbell was hit with the threat of a civil lawsuit after he repeatedly harassed a young female staffer in the governor’s office.

The Riley administration paid $53,000 in taxpayer funds to pay-off the woman Azbell harassed. The Settlement Agreement, dated December 17, 2003, was signed by Riley, Azbell and Riley’s chief of staff, Toby Roth. It described Azbell as having “harassed” and “discriminated” against the young woman.

Questions as to why an admitted deviant is still employed by Hubbard and the Republican House Supermajority still remain unanswered.

Why would a self-proclaimed conservative and family man like Chairman of the Committee Senator Bill Holtzclaw (R-Madison) continue to approve a state contract for a man of such admitted low character?

Azbell, chief consultant to Speaker of the House Mike Hubbard, made a video of himself partying in Las Vegas and distributed it on the internet while receiving his enormous paycheck from the state. In the video, Azbell proudly praises, in song and dance, the virtues of gambling, strippers, sex-clubs and other vices.

Azbell proclaims his mantra of “Cigars, Booze and Good Looking Women” during the professionally-produced video.

Why would a responsible republican like Senator Paul Sanford (R-Huntsville) who sits on the contract review board continue to tolerate a man like Azbell being paid $8000 a month by the hardworking men and women of Alabama?

In another professionally-crafted video entitled “Azbell Christmas Special,” David Azbell, one of the Speaker’s righthand confidants, disparages Christmas as a holiday and a deeply-held religious season. In one of the songs, Azbell uses it to express his views on what many consider the most holy event in Christianity. The lyrics are, “Santa brought me two aces, I wonder if I should split? Hey waitress, bring me a drink, while I think. What would Jesus hit?” To use the term “What would Jesus hit?” referring to the Lord and Savior Jesus Christ as a person who would gamble is beyond the pale for most Alabamians.

Yet, tomorrow, republican members of the contract review board, Senator Bill Holtzclaw, Representative Steve Clouse, Senator Arthur Orr, Senator Trip Pittman, Senator Paul Sanford, Representative Paul Lee and a handful of democrats will decide if the taxpayers of the state should continue to pay a disgrace like Azbell.

When republicans won the Statehouse in 2010, they promised to clean up Montgomery. This is an opportunity for them to show they mean business.