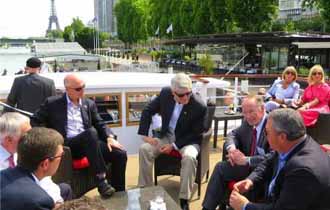 MONTGOMERY—In keeping with Gov. Robert Bentley’s promise of effective and efficient government that is streamlined and cost conscience, the Governor has issued an executive memorandum for all of his cabinet members and agency directors to follow entitled,

“Requests for Proposal for Professional and Personal Services Contracts.”

On August 28, Bentley set forth stricter guidelines for issuing these types of contracts.

“As the administrators of State Government, you and I have the obligation to continually analyze the operations of government and identify ways to reduce State spending with minimal or no reduction in the quality of services provided by the State of Alabama,” wrote Bentley. He goes further by stating, “My goal is to help insure that, across state agencies, our departments continue to identify the best options when purchases are necessary.”

At the heart of the memo, Bentley is telling those who serve the state in his administration that “Requests For Proposal (RFP) for procurement of goods and services, should be accomplished through an open and competitive process to the extent possible.”

In other words, Bentley wants all contracts for good and services to be put out for competitive bid, in every case where it is possible.

In the past, no-bid contracts have, on occasion, been awarded under the guise of professional or personal services, but have been, in fact, a backdoor for paying off cronies or gaining favor with a particular group or business.

Bentley makes it clear that he wishes for those who serve in his administration be blameless and transparent in each phase of the contract process stating that when “professional services are needed, the purchasing state entity shall follow the processes specified in S41-16-72, Ala. Code (1975).”

Bentley, seems to be reminding his administration that he wants a fair and open process.

A case in point of when this process was questionable at best was when, under the direction of Secretary of Commerce Greg Canfield (pictured above), the state entered into a professional service contract with the Public Relations firm Big Communications.

According to an earlier report by Alreporter.com, Canfield, initiated a $384,000.00 no-bid, “professional service” contract with Big Communications to provide public relations for the Commerce Department. However, the contract was actually signed by Ed Castille, the head of AIDT, the industrial development and training arm, recently placed under the department of commerce.

When asked why Big Communication was given a no-bid contract Canfield explained, “It was a ‘Professional Services Contract…You don’t put out to bid legal work…professional services because the law recognizes they are unique and require expertise and proof that the services can be provided.”

However, advertising is not usually under a no-bid professional service contract.

In his memorandum, Gov. Bentley makes a point of saying, “We must ensure that the procurement process for professional and other personal services is being applied constantly.”

In the memo, Bentley reminds those in his administration that, “You are to make the provisions of this directive known to all personnel who are involved in the procurement of services in your Department or Agency and to require strict compliance with its directives.”