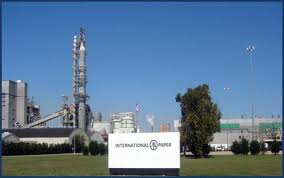 On Thursday September 19th, members of the Alabama Forest Owner’s Association met in gatherings around the state to listen to the latest information about the International Paper (IP) announced closing of it’s Courtland Paper Mill.

The state’s Forest Owners listened to Alabama Forestry Commission North Regional Forester Terry Ezzell. Ezzell said that the forests in the region are somewhat overly thick now and closing of the International Paper Mill could worsen the situation. The forests are grown to produce saw timber and poles not pulpwood, which is very cheap, but pulpwood is a byproduct of raising timber for lumber since the forest needs to be thinned to allow the remaining trees to grow taller and faster. Ezzell said that the danger from the loss of pulpwood demand is that too many trees per acre can lead to the forest growing slower, stagnating, and increasing the forest fire risk.

Dr. Adam Taylor, the Forest Products Extension Specialist for the University of Tennessee said that the closing was a very sad event, but overall the wood industry is poised for growth. Taylor said, “We have a special fast growing product that is well respected around the world,” referring to southern pine lumber.

Ezzell said that the best option may be to lure two or three smaller paper mills to northwest Alabama and doubted that it is possible to lure a mill as massive as IP to the state. The Courtland Paper Mill was built in 1971 by the Champion Paper Company. The hundred plus year old company was bought out in 2000 by International Paper.

Alabama Speaker of the House Mike Hubbard (R) from Auburn said on Facebook, “I spent the day yesterday with Representative Ken Johnson talking about job creation in Lawrence County. We spoke with local business and community leaders about the efforts underway to help the employees and families of International Paper and the way forward for economic development. I’m confident that with local leadership from folks like Ken Johnson and the incredible business environment we’ve created in this great state that more jobs announcements will be coming to Alabama and Lawrence County in the near future.

Alabama Commissioner of Agriculture and Industries John McMillan said on Facebook, “It is commendable that Governor Robert Bentley and other state leaders are working to keep International Paper in Courtland AL. It is by no means a simple task, as there are no state economic resources to help existing businesses, especially ones with 1,100+ workers.”