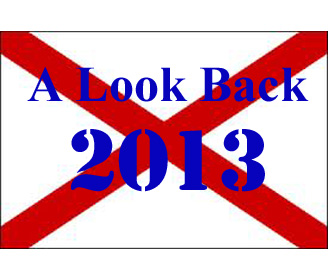 As we usher in a New Year, it is appropriate that we look back on the stories that shaped the year past.

This year, Pope Francis asked, “How can it be that it is not a news item when an elderly homeless person dies of exposure, but it is news when the stock market loses two points?”

To this I have no answer, other than to admit that our priorities have fallen far from peace on earth, good will toward man.

In the rough world of politics, it is easier to find those stories in which our political class sold the rest of us down the river than it is to find examples of government doing good. If politics is about who gets what, then the politicians had a very good year. If politics were about serving the citizens of our state, then the people had a lousy year.

As Thrasymachus said, the powerful in Montgomery, “declare what they have made – what is to their own advantage – to be just.”

Still, there are those of us who hope that the day will rise when true justice will bring “friendship and a sense of common purpose”

The following are Alabama’s top political stories of 2013, in no particular order.

The AAA has been a Pandora’s box of legislation passed under the heading of education reform. The final legacy of the law is far from certain but what we have seen from the beginning has been troubling. Passed under a cloak of deception, the bill’s advocates admitted that the AAA would not have passed into law had they not have used the “switch-a-roo” to bring it before the legislature. Even if one sets aside the unethical manner in which it was passed, the mechanism for its implementation has been ad hoc and extremely flawed. Now, there are growing concerns as political operatives like former Gov. Bob Riley and others position themselves to make millions off the program’s Scholarship Granting Organizations.

After only three years in power, Republicans in State government began to resign office in droves. Both House budget chairmen Jay Love and Jim Barton left to lobby, Love for the newly created Business Education Alliance an extension on the Business Council of Alabama and Barton to head a new lobbying group with Phillip and Allison Kenny, whose biggest client is the Poarch Creek Band of Indians. Rep. Barry Mask traded in his House seat for the lucrative job of CEO for the State’s Realtors’ Association. Sec. of State Beth Chapman resigned her office to become a lobbyist for ALFA. Chapman was candid about her resignation citing money as the primary motive.

In the ever-growing political swamp that is created by the confluence of lobbying and public office Love, Barton, Mask and Chapman served as prime examples of a system gone array.

Republicans Will Not Seek Re-election

For the last three years, the Republican Supermajority has been enjoying unchecked power in the State House. However, some of the major players and raising stars have decided to not seek re-election. Speculation as to why runs the gambit from bad polling number to the rumor that many have been spending too much time in front of an Attorney General’s Special Grand Jury.

Those who have confirmed they will not run in 2014 are:

The demise of the Alabama State Democratic Party has not been over exaggerated. After a stunning defeat in 2010, the ALDEM has been struggling to find its voice in state politics. With the split between party factions in 2013 it is unclear how the party will put together a winning agenda for the foreseeable future.

Many had written the political obituary for Bradley Byrne after his lost of the Governor’s race to Robert Bentley in 2010. But, Byrne was down but not out and came back to win the special election for US Congress in AL District One.

The 2013 legislative session saw the Republican Supermajority take aim at not only the Alabama Education Association (AEA) but also its Executive Secretary Dr. Henry Mabry. Punitive measures to target the group and its leadership reach it zenith with the removal of Mabry from the TSA board. Since then, Mabry and the AEA have focused on winning special elections throughout the state. In each race, AEA-backed republican candidates have defeated the ALGOP establishment’s handpicked contenders. Backed by a political warchest unparalleled by another group, and a motivated membership, Mabry and the teacher’s organization have made a stunning comeback.

Over the last year and a half the Alabama Political Reporter has chronicled, in detail, the ethical, moral and perhaps criminal failing of Republican Speaker of the House Mike Hubbard. We have stood almost completely alone in our coverage of Hubbard’s misdealing, not just because we were willing to do the hard research connecting Hubbard and his misdeeds but because we were unbowed by Hubbard’s threats and attacks. If there is a legacy to 2013 it will be known as the year that politicians and the media turned a blind eye to the orgy of corruption that has been the Hubbard administration.

Governor Robert Bentley, is without a doubt the biggest political winner of 2013. Bentley’s good heart and good nature has continued to dominate the state’s political landscape. With a favorable approval rating hovering around 70 percent and with money in the bank and no credible challenger Bentley should coast to a second term as governor.

Our list of notables is a short list of individuals who made major contributions to the political process by word and deed.

McClendon has led many efforts over the last several years to reform government including stabilizing Medicaid. He has shown outstanding ethical leadership within the political process. A man for whom the word honesty is not just a slogan but a way of leading.

Ward has demonstrated outstanding legislative leadership in his efforts to offer judicial reform and prison oversight. He has shown that patient guidance and intellectual honesty are key ingredients for leadership within the legislative body.

Senator Figures is a trail-blazer who has opened many doors once closed to women and minorities. Service to others is the soul of her moral authority. As the current Senate Minority leader, she is the first female minority leader in either chamber of the Alabama State Legislature’s history. She has shown strong leadership while exemplifying grace under pressure. Her elegant demeanor and steely resolve is a true example of an iron hand in a velvet glove.

This year we recognize those who substantially added to the political debate 140 characters at a time.

In 2013, two tweet-masters kept readers informed and politicos on their toes we are proud to recognized @JuntoGunto and @MaximusShelby as Twitter Warriors of the year.

In welcoming in the New Year, let us leave you with the words of Pope Francis in his first Apostolic Exhortation, Evangelii Gaudium (The Joy of the Gospel.)

“The great danger in today’s world, pervaded as it is by consumerism, is the desolation and anguish born of a complacent, yet covetous heart, the feverish pursuit of frivolous pleasures, and a blunted conscience. Whenever our interior life becomes caught up in its own interests and concerns, there is no longer room for others, no place for the poor. God’s voice is no longer heard, the quiet joy of His love is no longer felt, and the desire to do good fades.”