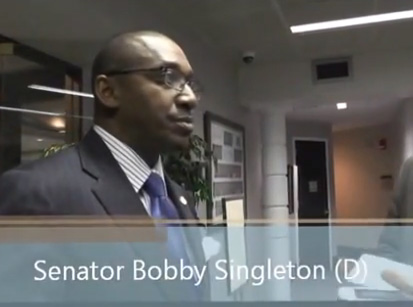 Some unexpected action came in the Senate chamber yesterday when a de facto filibuster bill title reading was begun by Senator Bobby Singleton, a Democrat, who was frustrated with the procedural barriers being put up by the GOP. In the end, the protest by legislators took the form of an attack on SB11 and other companion legislation that would consolidate the state government in ways that politicians on both sides of the aisle say may be potentially dangerous. Check out APR’s exclusive coverage, including on camera statements from the Senate majority and minority leaders, and Senator Singleton.

In this article:Lee Hedgepeth, news