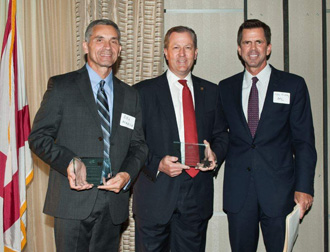 The event was hosted by the American Federation for Children, a conservative advocacy group whose main focus is school privatization. The group is also a trustee level member of the American Legislative Exchange Council, or ALEC, a group sometimes referred to as a “bill mill,” as it drafts legislation for conservative causes nationwide.

The American Federation for Children’s political consulting group, Steinhauser Strategies, has a blog on which the event is described in detail.

The event was held at “the Club” in Birmingham, and featured Speaker of the Alabama House Mike Hubbard and Alabama Senate Pro Tem Del Marsh receiving awards. Afterwards there was “a small dinner discussion with the two legislators, business and community leaders, and a few staff from AFC.”

In attendance was Florida capital investment banker John F. Kirtley, who was recently featured on APR when he founded an SGO under the Alabama Accountability Act along with former Governor Bob Riley as his co-chair.

Under certain provisions in the Accountability Act — a law reminiscent of ALEC-drafted legislation — provide that administrators of such “Scholarship Granting Organizations” are entitled to five percent off the top of any money raised. Kirtley’s investment group, who has funded many such projects, made almost seven million dollars administering a similar program in Florida, where the fee was capped at only three percent. Alabama has set aside twenty five million dollars for SGO tax credit funding. The public is allowed to donate to such organizations, and will receive dollar-for-dollar tax credit reimbursements from the state.

In addition, Kirtley may have financial ties to Speaker Hubbard as well, with APR reporting that a PAC he controls in Florida has frequently used Majority Strategies, a business linked to the Speaker’s time as ALGOP chairman.

See the full details of John F. Kirtley’s SGO investments in Florida and other states here.

According to its website, John F. Kirtley is a partner at the investment firm KLH Strategies. His bio, as listed on the website, is as follows:

“John is co-founder and a partner of KLH Capital, where he helps oversee the firm’s investment decisions and serves on the board of all KLH portfolio companies. Over the course of his career, he has successfully identified, facilitated, and invested in more than 130 lower-middle market businesses.”