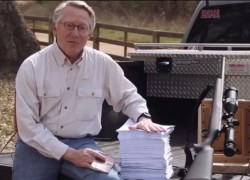 In a newly released campaign ad, Will Brooke, a candidate in Alabama’s Sixth Congressional race, takes aim at Obamacare – quite literally.

In the campaign advertisement, titled “Let’s Do Some Damage,” Brooke says that he wants to talk about two subjects: the Second Amendment, and “doing damage” to Obama’s Patient Protection and Affordable Care Act.

Brooke takes his time loading a full copy of the law into afirst with a pistol, and then with more serious firepower, including an AR-15, the type of weapon used in the Sandy Hook Elementary School shooting.

The full political advertisement can be seen here.

“Well we had some fun and knocked some holes in it, but we didn’t quite get the job done,” Brooke, a businessman, says in the commercial, having unsuccessfully tried to shoot all the way through the new health care law.

Brooke is not the only potential officeholder to have used the idea. In the 2012 election cycle,

Ron Gould, a then-candidate for the Arizona Senate, used a pump action shotgun to skeet shoot a smaller version of PPACA. Gould’s video can be seen here. He won that election and now serves in the state’s upper chamber.

In addition to Obamacare, though, many things have been taken the bullet in campaign ads, quite literally, and it seems the motif is bipartisan.

Also in 2012, Democratic Oklahoma congressional candidate Rob Wallace shoots a map of the state of Texas, showing voters that he will not allow Oklahoma’s water resources to be “stolen” by the Lone Star State. Video here.

Two years before, then US Senate candidate Joe Manchin of West Virginia took fire at the proposed carbon emission cap and trade legislation, which never gained real momentum for passage to begin with. That ad can be seen here.

Probably the most notorious in the category, however, are the ads of GOP state congressional candidate Gerald Gay, who mows down a replica of the Capitol and a red circle symbolizing socialism with a semi-automatic weapon. That can be viewed here.

Will Brooke released the following statement about the ad.

“ObamaCare is a train wreck that will damage America’s healthcare system and add trillions to our nation’s debt. Premiums here in Alabama are skyrocketing and over 90,000 individuals have already lost their health insurance. Just last night President Obama dictated another deadline extension, trying to save his fatally-flawed social welfare program. Our free, private markets are much better suited to deal with American’s health care needs than a bunch of politicians and bureaucrats. We need to get rid of ObamaCare. Then we need to replace it with a conservative, market-based solution. This ad shows that we can have fun with a serious subject, but for those who have already been hurt by the law here in Alabama, it’s anything but funny. I will fight every day to right the wrongs of ObamaCare.”

The primary is June 3rd.