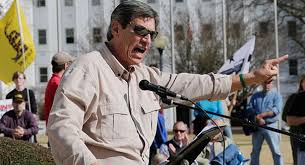 MONTGOMERY—On Friday, Chairman of the ALGOP Bill Armistead leveled a barrage of attacks on the Alabama Foundation for Limited Government. Armistead claims that the organization is participating in “Dirty, Potentially Unlawful, Political Tricks.”

In a press release, Armistead called the group “elusive,” complaining about the “Take The Pledge” television advertisements the Foundation is running across the State.

The President of Alabama Foundation for Limited Government is former Republican State Senator John Rice a man that Armistead has known for years. There is nothing elusive about Rice who has been a active member of the ALGOP for decades, who in 2012 sued the State for taking money from the oil and gas trust fund to balance the budget.

Rice is also challenging Speaker of the House Mike Hubbard for Place 1 on the ALGOP’s Executive Committee for Lee County.

Armistead takes issue with the Foundation’s message calling for lawmakers to take a Anti-corruption pledge.

“The Alabama Foundation for Limited Government is skirting state campaign finance laws by establishing itself as a non-profit while blatantly attempting to influence the outcome of elections, and they haven’t reported a dime.” Armistead said. “Not only could this be a violation of state law, but it’s a shameful attempt to mislead Alabama voters.”

Armistead fails to call out groups like the Foundation for Education Accountability, chaired by Senate President Pro Tem Del Marsh and the Riley/Hubbard fundraiser Kate Anderson.

Neither does the Chairman make reference to the fact that it was Speaker Mike Hubbard and Del Marsh that have allowed these foundation to thrive in Alabama by not enacting legislation to thwart such groups.

Sources within the ALGOP say that Armistead has received political pressure from members of the Republican establishment—i.e. the Hubbard, Marsh, and former Gov. Bob Riley—faction to condemn Rice, who is more a social conservative and has come out strongly against Common Core and other Tea Party driven issues.

The Foundation says that the “guiding precept for the Alabama Foundation for Limited Government is government is too big, too intrusive, spends too much money and must be scaled back at all levels.”

Armistead refused to return an email asking, “What part of the Foundation’s platform he did not support?”

Others have pointed out that Armistead’s threats against Rice are coming on the heels of indictments and convictions for some of the State’s Republican lawmakers.

A member of the Executive Committee that spoke on conditions of anonymity said, “The blood bath is coming and Armistead is trying to do anything he can do to save the Party and his job.”

Armistead, like others in Party leadership, has stood silently by as the corruption investigations by the Attorney General has dug deep into allegations of bribes, pay-to-play and other potential criminal activities by Speaker of the House Mike Hubbard and other Republican lawmakers.

Armistead did not return request for comments about his statement.

Recently, a political mailer was sent to various districts pointing out the failings of some incumbent republicans who are facing GOP challengers in the upcoming primaries.

Like Armistead, State Senator Phil Williams (R-Rainbow City) called the group “mysteriously funded,” but then went a step further saying the organization was a front for the Alabama Education Association, (AEA).

Williams does not accuse Rice, he accuses the AEA for attacks on his record as a Senator. A similar statement is echoed by State Representative Alan Harper (R-Northport).

Harper was elected as a Democrat and only joined the Republican Party once the GOP took control of the State House.

Williams has been polling very low against Former State Senator Larry Means, who Williams bested in 2010.

Williams accuses Rice’s foundation of employing, “The best form of psychological operations.” He said, “Tell people they haven’t been seeing what they know they’ve been seeing! Tell them bad budgets have been passed when they really haven’t! Tell them they are not going to prosper! Tell them corruption is rampant! Undermine conservative policies while demanding more of them! Discord, fear, stepping backward to avoid progress while screaming for progress! Classic Saul Alinsky….classic AEA.”

While accusing other of “psychological operations,” in 2010 Williams took $35,000 in campaign contribution from PCI Gaming while accusing his opponent of taking bribes from gaming interests.

So far, not one of the individuals that have spoken against the Foundation for Limited Government or have offered any proof of actual wrong doing or any affiliation with the AEA.

The statements made by Armistead, Williams and Harper are heavy on innuendo and light on facts.

Each man seems to be accusing Rice, a stalwart conservative, of playing the dangerous game of challenging the establishment.