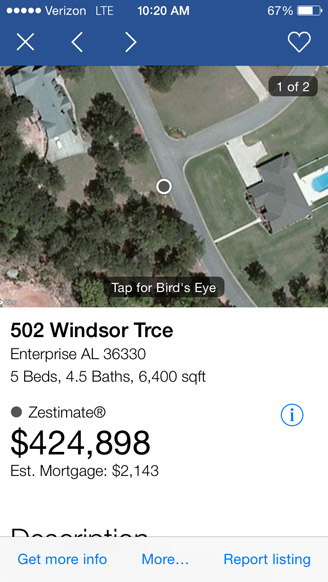 MONTGOMERY—It has recently come to light that Rep. Barry Moore (R-Enterprise) was taped in telephone conversations telling his primary component Josh Pipkin, that Speaker Mike Hubbard (R-Auburn) was going to, “…bring down holy hell,” if Pipkin doesn’t get out of the House District 91 race.

Moore also told Pipkin that Hubbard would kill 100 jobs that were coming to Enterprise, in a deal with Enterprise Electronics Corporation (EEC).

A deed from Coffee County signed on August 15, 2012 shows that Moore and his wife Heather sold their home to the very company planning on bring those jobs to the city. Enterprise Electronics Corporation purchased the Moore’s home for $650,000. However, the real estate estimation only evaluated the home’s worth at $424,898. The over $200,000 difference that was in the estimated cost of purchasing the home and it selling price leaves the sale open to some very interesting questions.

Enterprise Electronics Corporation is a 40-year-old technology company specializing in the manufacture of world-class Doppler weather radar systems. They have been located in Enterprise since 1971.

On January 29, 2013, Southeast Sun reported that Enterprise State Community College was on-track to get a new, unmanned, aerial systems program. The plan was for the program to be housed in a 44,000 square-foot facility currently occupied by Enterprise Electronics Corporation (EEC), an Australian-owned company. Some $2 million in State funds were to be used for the purchase EEC’s building. EEC would then invest the $2 million in a brand new facility to build its satellite radar systems.

The net result of the transaction would be approximately 100 new, good paying, highly-skilled jobs at the new EEC plant in Enterprise. For its investment, the State of Alabama would get EEC’s high-tech facility near Enterprise State Community College to create a state-of-the-art technology curriculum unmatched in Alabama.

Many questions are still unanswered as to why Enterprise Electronics Corporation would need $2 million in State funds to expand but had over $600,000 to invest in a 5 bedroom/4.5 bath home in suburban Enterprise.

Calls to Enterprise Electronics Corporation Headquarters requesting information regarding the purchase of the home were not returned. Likewise calls to the Moore went unanswered.