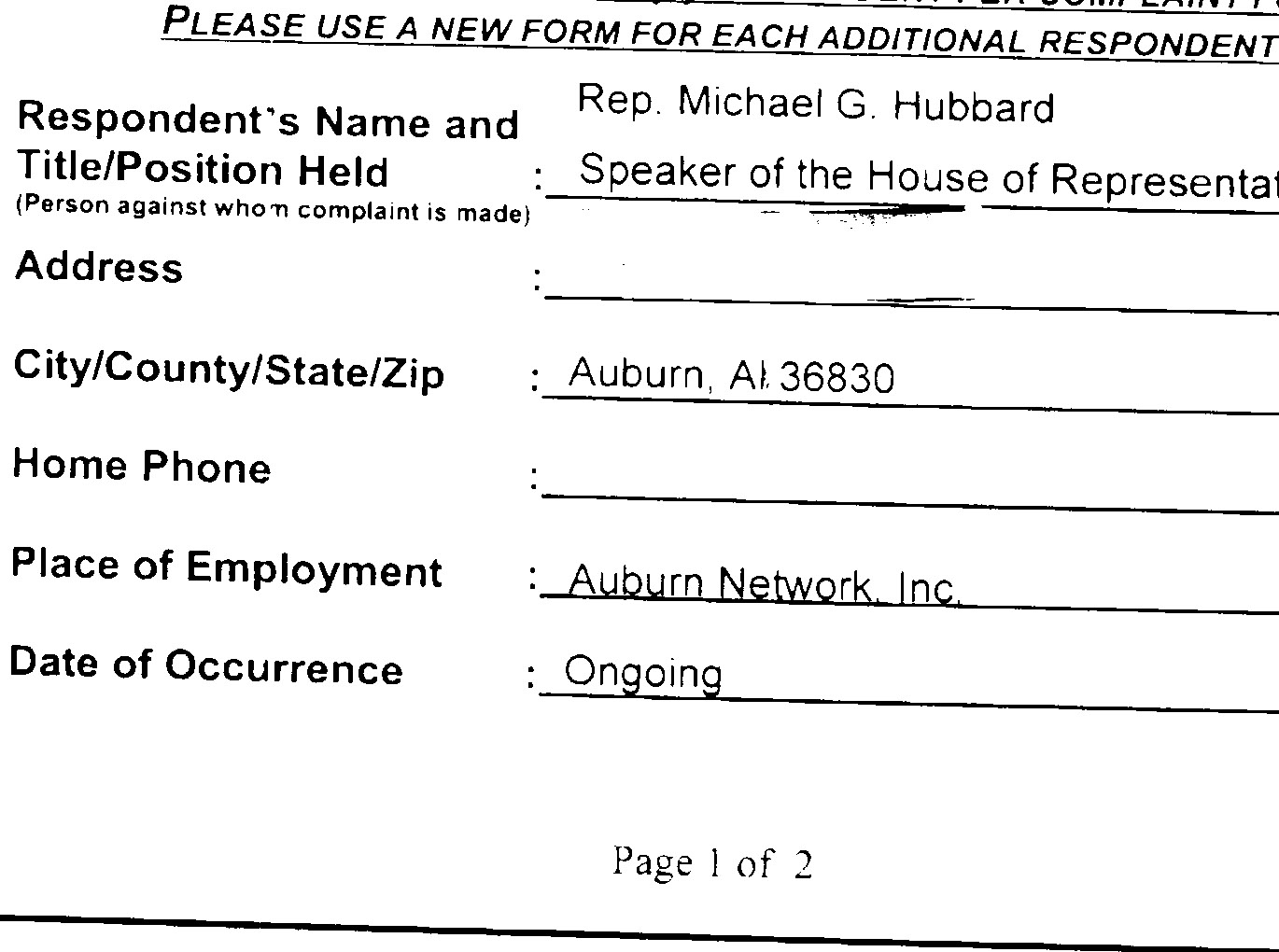 MONTGOMERY—The Alabama Political Reporter has obtained a copy of an ethics complaint filed against Speaker of the House Mike Hubbard (R-Auburn), in which, among other things, the complaint states that since 2008, “…broadcast companies owned and/or under the local control and direction of Speaker Hubbard…have recorded advertising revenues of at least $3.3 million.”

The December 2013 complaint filed with the Alabama Ethics Commission levels serious charges against Hubbard, stating that he used his office for personal gain, voted for legislation that would benefit his business clients, improperly used state personnel and equipment and failed to properly report his business dealings on his Statement of Economic Interest.

Much of this has been the subject of the Alabama Political Reporter’s continuing articles on Stealing the StateHouse; a collection of stories investigating possible wrong doing by Speaker Hubbard.

One section of the complaint is of special interest in that it presents detailed, alleged evidence that Hubbard affiliated broadcast companies have, “…improperly received payments from State of Alabama government agencies.”

According to the complaint, an Alabama Open Records Requests was made regarding fees paid to Hubbard business interests by agencies which as a “Matter of practice [do] not advertise or pay for advertisements. The Finance Department categorized the payments as “SERVICES PROFESSIONAL ADVERTISING.”

Under Republican Secretary of State Beth Chapman, her office spent $210,000 for advertising paid out of the Help America Vote Fund.

Under HAVA Title III requirements: a state may use funds for:

Procuring voting systems that comply with the requirements of HAVA
Developing, operating, and/or maintaining a computerized statewide voter registration list.
Providing required information to voters at the polling place for Federal elections.
Implementing and/or operating a system of provisional voting during Federal elections.
Implementing identification requirements for first-time voters who register to vote by mail.
States can use these funds for other improvements to the administration of Federal elections only after meeting the Title III requirements, according to National Conference of State Legislatures.

The report goes on to show that payments from several state agencies were in the form of “sponsorship” of Auburn University radio and television sports programming.

The complaint lists six state agencies which began purchasing “sponsorship” from Hubbard business interest after he became Speaker of the House, they were: the Board of Heating, Air Conditioning & Refrigeration Contractors, Department of Public Safety, Public Service Commission, Forever Wild Trust Fund, Alabama Forestry Commission, and Department of Children’s Affairs.

The Forever Wild Trust Fund engaged a Hubbard business interest Auburn Sports Network to provide advertising for, “Branding and promotional exposure.”  The total amount spent by the trust fund was $166,000.

The State’s Board of Heating, AC & Refrigeration Contractors spent $122,945 for advertising with Hubbard’s interest according to the state records quoted in the complaint.

The six agencies that purchased Sponsorship programing from Auburn University radio and television sports programming, spent a total of $470, 245 since Hubbard attained his Speakership.

However, since 2008. the Alabama Department of Public Health, spent the greatest amount with $2,945,652 going for advertising with Hubbard’s business interests. The Department of Health said that they spent equally with Auburn University and the University of Alabama sports programs. Much of the advertising was for AllKids, preparedness and Federal programs. They point out that the funding for these programs has decreased and that they are no longer engaged in such large media buys.

The payments detailed in the complaint were made to the Hubbard Business Interests under several variations of company names, including Auburn Network  Inc., ISP Sports and International Management Group (IMG).

The documents provided to the Ethics Commission concludes that on at least 85 occasions Hubbard was in violation of State law by, “improperly using or causing to be used his public office to obtain personal gain for himself and businesses with which he is associated.”

As a basis for action to be taken by the Ethics Commission the complaint cites § 36-25-5.

Personal Use of Office

The Ethic’s Commission would not comment on the complaint, or any active investigation that may be ongoing at this time.