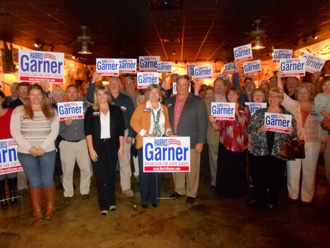 MONTGOMERY—Senate District 30 candidate vows to give his legislative salary to first responders in his District.

Republican Harris Garner, who is seeking election to the State Senate in a seat vacated by Sen. Bryan Taylor, has told members of the District volunteer fire departments and rescue squads, that if he is elected, he will give his State salary to be divided among those organizations.

Garner said, “Our founding fathers established a system of government to be represented by citizen lawmakers, not career politicians. For that reason, I have decided to not take my legislative salary. I want to reinvest your tax dollars back into our district.”

Harris said this small gesture is a way of showing the people of District 30, that he is committed to public service and not self service.

Garner’s opponent is Clyde Chambliss, who has the backing of Speaker of the House Mike Hubbard and former Gov. Bob Riley. Garner says, he is not concerned that the establishment is supporting his rival, because he is not looking to be beholden to anyone except the people of District 30. Garner added that he is seeking to replace a man who was supported by Hubbard and Riley, and he did nothing for the District except aggrandize himself.

“We need conservative leadership, not lock step followers of the corrupt establishment.”

The Republican primary will be held June 3.