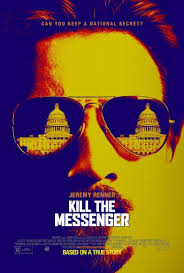 MONTGOMERY—Kill the Messenger is a soon-to-be-released major motion picture that tells the tragic story of San Jose Mercury News reporter, Gary Webb. His 1996 investigation into links between the C.I.A. -backed Nicaraguan Contras and the drug trade shook the C.I.A., the newspaper community and the world.

The film is based on a series of articles that Webb wrote alleging that during the 1980’s the Nicaraguan Sandinista Government, aided by the C.I.A., supported crack cocaine smuggling into South Central, Los Angeles.

Mark Warren, writing for Esquire, recounts how Webb’s career was “destroyed by other journalists at powerful newspapers who were acting as handmaidens of the C.I.A.”

The New York Times, Washington Post and L.A. Times, each launched a torrent of attack-articles on Webb, after the publication of ties between the C.I.A., Contras and crack-cocaine. The reports from these “respected,” news organization were later found to be untrue, but by then it was too late, Webb’s career as a journalist had been destroyed.

On December 10, 2004, Webb was found dead from two gunshot wounds to the head in of an apparent suicide. His wife said the 49-year-old Webb had been “distraught for some time over his inability to get a job at another major newspaper” according to a report by the Sacramento Bee.

A 1998 report by the C.I.A. Inspector General to The House Committee On Intelligence substantiated much of Webb’s reports about cocaine smugglers, the Nicaraguan Contras, and their ability to freely operate without fear of law enforcement.

The movie portrays Webb as the hero journalist standing up to the corrupt powers of his day. But, it also serves as a cautionary tale of what can happen when the media genuflects to the powers of a corrupt establishment to curry favor or sell more ad space.

Gary Webb’s death may be one of the greatest tragedies in the history of investigative journalism.