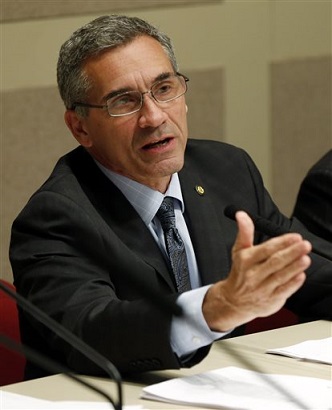 In an opinion piece published by several newspapers throughout the State, the presumptive Senate President Pro Tem Del Marsh wrote that, “Freedom of the press is not going anywhere in Alabama.”

Marsh is responding to the negative attention he has received after saying he wanted to define who is a journalist.

Now, after the publication of his editorial, things are getting even more heated for the Senator, with the conservative Daily Caller and The Liberty Papers both taking issue with his proposed actions.

Under the headline, “Meet The ‘Conservative Champion’ Who Wants To Quash Press Freedom,” the Daily Caller takes Marsh to task for wanting to license journalists…

…while the Liberty Papers suggest that Marsh would exclude Thomas Paine and other patriots from the Alabama press room.

More than one reporter has questioned how Marsh is fit to oversee the Alabama Senate, when he is not willing to uphold the US Constitution?

Marsh says that he asked, “the Secretary of the Senate to put together a definition of what qualifies as a legitimate journalist.”

The Alabama Political Reporter, along with the Anniston Star and the Montgomery Advertiser, have questioned Marsh’s mission to define who is and who is not a journalist.

Marsh is also concerned that, “Allowing agenda-driven bloggers the same access and legitimacy as serious, long-established and unbiased reporters, could soon create a confusing, circus-like atmosphere and blur the line between promoting opinions and reporting facts.”

He seems worried that these hypothetical partisan and agenda-driven bloggers, “blur the line between promoting opinions and reporting facts.”

(It is important to note that Marsh is setting-up a number of straw men, this becomes even more interesting at the end of his piece, because there he will change to another straw man altogether to add credibility to his argument)

He never identifies these partisan and agenda-driven blogger and doesn’t supply an example of reports that “blur the line between promoting opinions and reporting facts.”

Marsh says he doesn’t want these unnamed bloggers having the same “legitimacy as serious, long-established and unbiased reporters.”

But, Marsh doesn’t want serious, long-established and unbiased reporters, he wants reporters who will not challenge the State’s Republican super majority. That is why Marsh, along with his partner, Speaker of the House Mike Hubbard, have cowed the press with threats or curried their favor with special access.

This is terrible logic.

Anyone who has witnessed the actions of the Republican super majority over the last four years knows that they are beholden to the “money men” and not to the people of Alabama. It is Hubbard, Marsh and former Gov. Riley who supply the cash and call the tunes.

Marsh’s argument also falls apart because of the First Amendment and the Supreme Court’s confirming the rights of the “lone pamphleteer.” Would Marsh have demanded that Thomas Paine report to an editor to publish to be considered legitimate?

He states, “While a free and open press is vital and necessary, there are some who are attempting to hijack the profession by promoting raw, political agendas from the confines of the press gallery. This is not freedom of the press, it is deceitful and wrong.”

Again, who are these people, “attempting to hijack the profession by promoting raw, political agendas from the confines of the press gallery?”

This is a bold accusation, one that demands an answer as to the identities of these individuals, as well as proof of their deceit and wrong-doing.

Marsh told Tim Lockette of the Star that he only wanted “real” journalists to have access to the press rooms. He also told Lockette that he “Never considered the Britts to be real journalists.”

He then told Mary Sells of the Decatur Daily that this was not about Bill Britt.

Of course, we have ample proof that Marsh considered us journalists until we began publishing the unvarnished facts about his deceit and wrong doings with Hubbard.

Marsh also states, “Several past and present members of the Capitol Press Corps reporters have indicated to us that they do not fear this process because they agree that paid political operatives must not be allowed to disguise themselves as journalists. They join us in recognizing the importance of preserving the integrity of their profession.”

Remember I told you that he would change the nature of the straw man to bolster the credibility of his argument? Well, here it is! In this paragraph Marsh, says that “past and present members of the Capitol Press Corps…agree that paid political operatives must not be allowed to disguise themselves as journalists.”

He changed his focus from partisan bloggers/agenda-driven bloggers to “paid political operatives.” Like most politicos, Marsh prays that the citizens he represents have the reading comprehension skills of a six-year-old.

No member of the press corps would agree that “paid political operatives” should have access to the press rooms. That’s what lobbyists do, and if they pay enough, they can sit in Marsh’s office (In Hubbard’s case, he will want to be paid directly).

Marsh, and especially Hubbard, have tried to convince the political class that because the Alabama Political Reporter accepts advertising from the Alabama Education Association, we are not credible. We will take anyone’s advertising dollars, including Marsh’s and Hubbard’s. We would have more advertisers if businesses were not afraid of Hubbard and Marsh.

Of course, it is interesting to note that both SEAGD and APCI, two companies named in the Hubbard indictments, have had paid advertising and/or editorial space on al.com.

This is just one more straw man on which to hang a false premise.

Over the last two years, Marsh and Hubbard, along with a handful of sycophant followers, have sought to revoke our press credentials. Is this the legacy of those who came to power promising an end to public corruption?

Sadly, the Republican super majority in the House is led by a man charged with 23 Felony counts of public corruption and the Senate is led by a man who is stuck to his side like a Siamese twin.

The scriptures teach us to beware of “Scribes and Pharisees, Hypocrites!” who are like “whitewashed sepulchers, which indeed appear beautiful outwardly, but are within, full of dead men’s bones and of all uncleanness.”