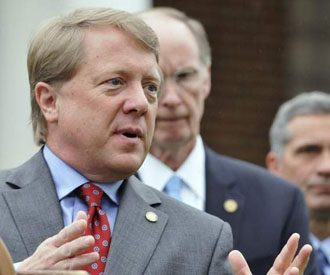 MONTGOMERY—“It is time we put everything aside and do our constitutional job and, that is, pass a budget,” said Sen. Dick Brewbaker (R-Montgomery) in a recent interview with the Alabama Political Reporter.

Brewbaker says he believes senators should refuse to vote on a BIR for any bill until they first pass a budget. A Budget Isolation Resolution (BIR) allows consideration and passage of a non- budget bills in the legislature.

Without criticism, Brewbaker acknowledges that this is a not a likely scenario, because individual senators have favored local bills they hope the pass before time runs out. And time is running out, as the legislature enters the home stretch of the 2015 session.

Over the last 10 days, the future of gaming in Alabama has become the hot topic, as a means to bolster the State’s flagging General Fund Budget.

“The gaming issue, which is taking up all of the attention right now, is very important, and it matters a lot, but everybody agrees, it’s not going to help us with this year’s budget,” said Brewbaker, “So, before we go into meltdown over gaming and lottery, we need to….pass a budget. After that, if there’s enough time to hash-out Class III gaming and lotteries, we’ll talk about it then.”

From a governing position, Brewbaker’s idea is a smart, conservative approach. But, this is politics and where the smart conservative must sometimes bow to the prevailing political winds. And right now, the wind is blowing from the Blackjack table.

At least two competing ideas are being bantered about:

The first would give the Poarch Creek Indians (PCI) a monopoly over Class III, Las Vegas style gaming, and perhaps a lottery. This idea is being put forward by the Tribe, with the backing of Speaker of the House Mike Hubbard (R-Auburn), who spends much of his day trying to defend himself against 23 felony counts of public corruption.

The second is a plan devised by Senate President Pro Tem Del Marsh (R- Anniston), which would expand Class III gaming for the PCI, plus non-tribal owned facilities at Birmingham Race Course, VictoryLand, Greenetrack and Mobile Greyhound, which is 75 percent owned by the PCI.

Brewbaker says the gaming issue will not be settled quickly because of the many competing interests. He says that Marsh’s plan is a starting place in the Senate, but, “We’re gonna go through several substitutes, and there are gonna be filibusters every step of the way. So, there’s no way in Hell they know how much time it will take to get it through the Senate.”

Brewbaker says that many senators are concerned about giving a gaming monopoly to anyone. He agrees that a one-time windfall for the State of $250 million as proposed by PCI  sounds appealing, but it does not address the long-term budget enhancements found in Marsh’s comprehensive plan:

“Politically, obviously, if you treat Indian and non-Indian gaming differently, you’ll have a lot harder time getting it through the legislature” said Brewbaker. “That may be the driving force behind the way Sen. Marsh’s bill was written, because he probably thinks his approach is the only approach that has a prayer of getting through both Houses.”

The draft bill Marsh gave lawmakers to review would need work, according to Brewbaker. He is especially concerned about the make-up and authority of the Gaming Commission:

“The commission, as it’s formed in that particular piece of legislation, does not have nearly enough power.”Brewbaker said. “They don’t have their own enforcement people, they don’t have subpoena power…” which is a grave concern. “If we’re gonna open up Class III casinos all over the State, we need to have a real gaming commission, with its own enforcement, with a lot of teeth, or we’re gonna really wish we’d never heard of this thing.”

The Montgomery Senator concludes that lawmakers should first address the budget and then look at alternative State revenue in the form of gaming. That, he feels, is the right approach.