For the last six years, many grassroot organizations in our State have been fighting against Common Core. Since its implementation, Alabama has gone from being 26th in the nation in math and reading, to dead last. We bring a bill every year, and without fail someone or some thing stops it from being brought up for a vote. If, by some small chance or miracle from God, it ever makes it out of committee to the floor, our Senators and Representatives would probably just run out the clock and assume their actions would not have political consequences; or, so they think.

Let’s look at how we got here and why we are stuck here.

Senator Del Marsh, who may be running for US Senate, already knew that there was no chance that Common Core would be repealed this year. But, two weeks ago, he promised a Republican Women’s group he would setup a bill and vote to repeal Common Core. The members of the Senate Education Committee, having heard from us countless times, knew exactly what Common Core was and where it came from. So, they sat and suffered through the show, knowing full-well that the fix was in. The Opponents sent one person to speak. That should have tipped off the Proponents, since all other public hearings on Common Core were always packed with “Educrats,” making sure the opposition was heard. Of course, it passed out of the Committee with a favorable report. Only Representative Vivian Figures from Mobile voted against it.

I responded to Senator Marsh’s “congratulations” with, “I enjoyed the Legislative Kabuki theatrics, but I know it is dead this year. Speaker McCutcheon told me last week it would not make it to committee.” Senator Marsh’s surprise was clear. Representative Terri Collins, Chairman of the Education Committee, a staunch supporter of Common Core, was not in favor of bringing it to her committee.

There are eight choke points between a bill being written and voted on by the full body, and the Governor signing into law. Every committee chairperson serves at the pleasure of Senate ProTem and the Speaker of the House, respectively. This means they can be replaced at any time if they don’t cooperate with what leadership wants. The politicians don’t want citizens to understand the process. The deception and collusion in order to gain Federal dollars, and with big business lobbyists, would so anger the voters that they would be replaced en masse.

The Common Core standards (a.k.a. College and Career Ready) and curriculum are devastating. They guarantee that our children will never meet their educational potential. The effect is a higher number of children will have only two options: get a GED or go to a Tech school. College will not be a possibility. With more children going into trade schools there is now an increase in the supply of semi-skilled labor in the work force. However, this decreases the wages/costs of that labor. The net result is that big business special interests decrease their cost and increase their profit all at the expense of our children.

Of course, this is all done in the name of “Jobs.” Now, with their increased profits, they are able to contribute even more money to the politicians to ensure they get what they want. The BCA, another staunch supporter of Common Core, is its biggest source of money today. Since 2013, the BCA has used $3.2 Million dollars to buy influence in the Alabama Legislature.

Speaker McCutcheon says that Common Core will be a Republican Agenda item next year. Remember it is an election year. And that is how this Kabuki theatre gets played every Session, and how the Swamp continues to thrive in Montgomery. 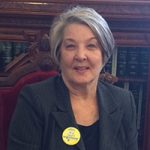 Durant's 1994 criticism of his sister's civil suit accusing their father of sexual abuse was not discussed at the luncheon.