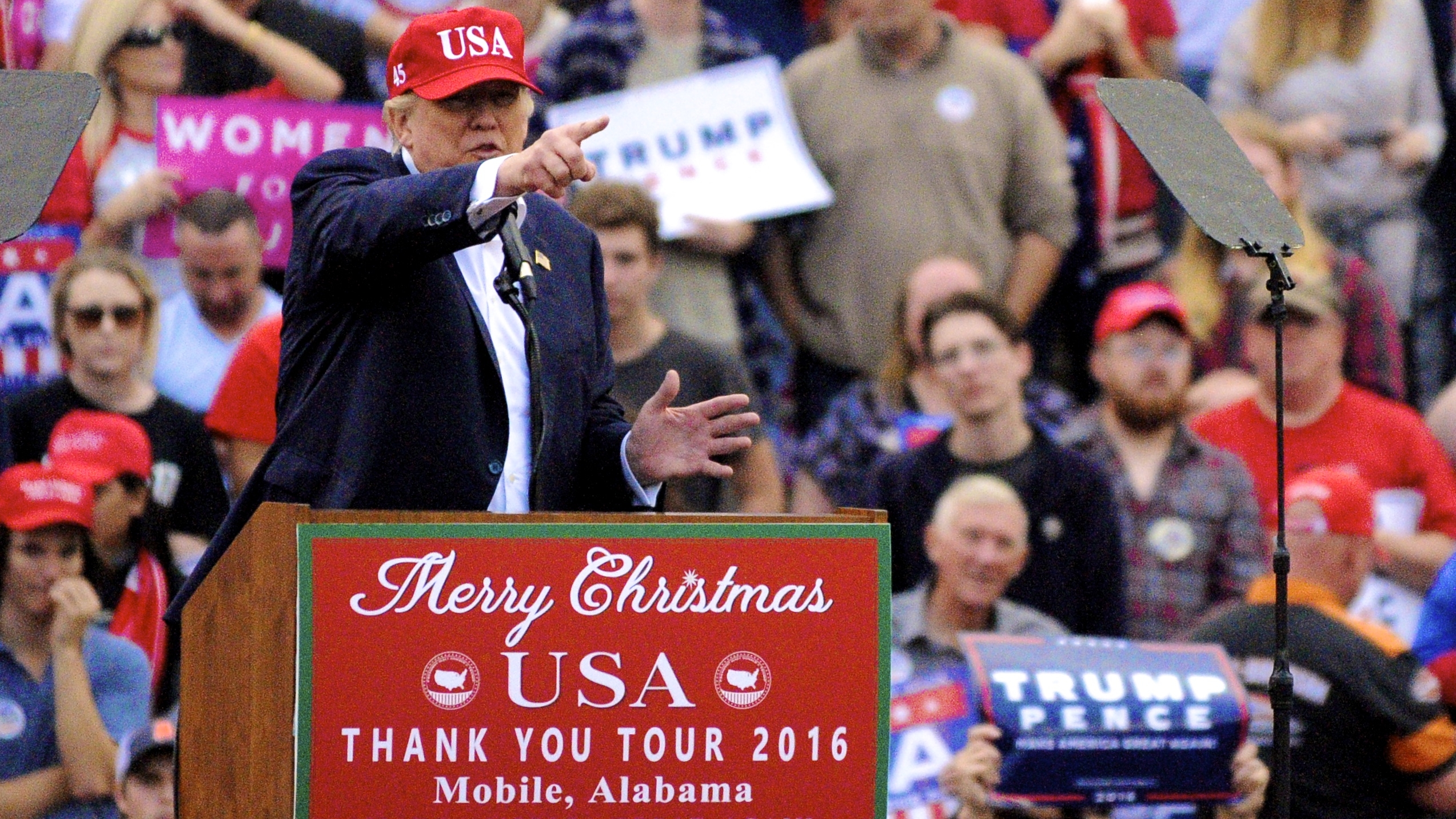 Donald Trump at a rally in Mobile, Alabama, in December 2016. (MADISON OGLETREE)

The White House has said President Donald Trump won’t come to Alabama to campaign for Republican Senate candidate Roy Moore but he will be in Pensacola, Florida, just 15 miles from the Alabama border, a few days before the Dec. 12 special election.

The Associated Press and The Washington Post report that Trump will appear at a campaign-style rally in Pensacola on Friday, Dec. 8, four days before the election. Pensacola, just east of Mobile, shares a media market with Alabama’s fourth largest city.

The rally, another in a series of “Make America Great” rallies, according to the AP, is planned for the Pensacola Bay Center. The Associated Press cited a person familiar with the planning who was unauthorized to speak on the president’s movements.

But the general manager for the Bay Center, Cyndee Pennington, told the Pensacola News Journal Thursday that she was not aware of any plans for a presidential visit. She said the center would be open to hosting the president, though, as it did twice during the campaign. Trump also spoke a third time during the campaign at another location.

The White House has sent mixed signals on its support of the Republican nominee for Senate. Trump initially supported fill-in Republican Sen. Luther Strange, R-Ala., in the primaries, traveling to Huntsville to campaign for him days before the runoff election in September. After Moore won, Trump promised to support him.

But Trump  —  who is known for his straight-forward style and frequent Twitter use — went radio silent for nearly two weeks after several women accused Moore last month of sexual assault and misconduct. While on a trip to Asia, Trump avoided talking about Moore and remained silent for nearly a week after returning to the White House while other Republicans in Washington were distancing themselves from Moore.

Since then, Trump has gone on the offensive on Twitter against Moore’s opponent, former U.S. Attorney and Democratic candidate Doug Jones, calling him “WEAK on Crime, WEAK on the Border, Bad for our Military and our great Vets” and “Bad for our 2nd Amendment.” He has also made note that Moore vehemently denies the allegations and raised questions about Moore’s accusers’ credibility and the timing of their accusations.

Though Trump has not explicitly praised or endorsed Moore since the allegations arose, the White House is considering flooding the state with robo-calls, text messages, social media posts or emails in support of Moore, according to Politico and the Associated Press. The move would be an attempt to mobilize Trump’s supporters in a state where he easily won with more than 60 percent last year.

The White House and Moore’s campaign have not commented on the reported trip to Pensacola. The trip would contradict previous statements from the White House press secretary Sarah Huckabee Sanders who has said the president’s schedule “doesn’t permit him doing anything between now and Election Day.”

If Trump were to campaign for Moore, it would amount to a further divide between Trump and Republican leaders in Washington, who have called on Moore to drop out of the race. Most Senate Republicans who had previously endorsed Moore pulled their endorsements after the allegations surfaced.

"All these races are on the cusp of beginning or have already begun."