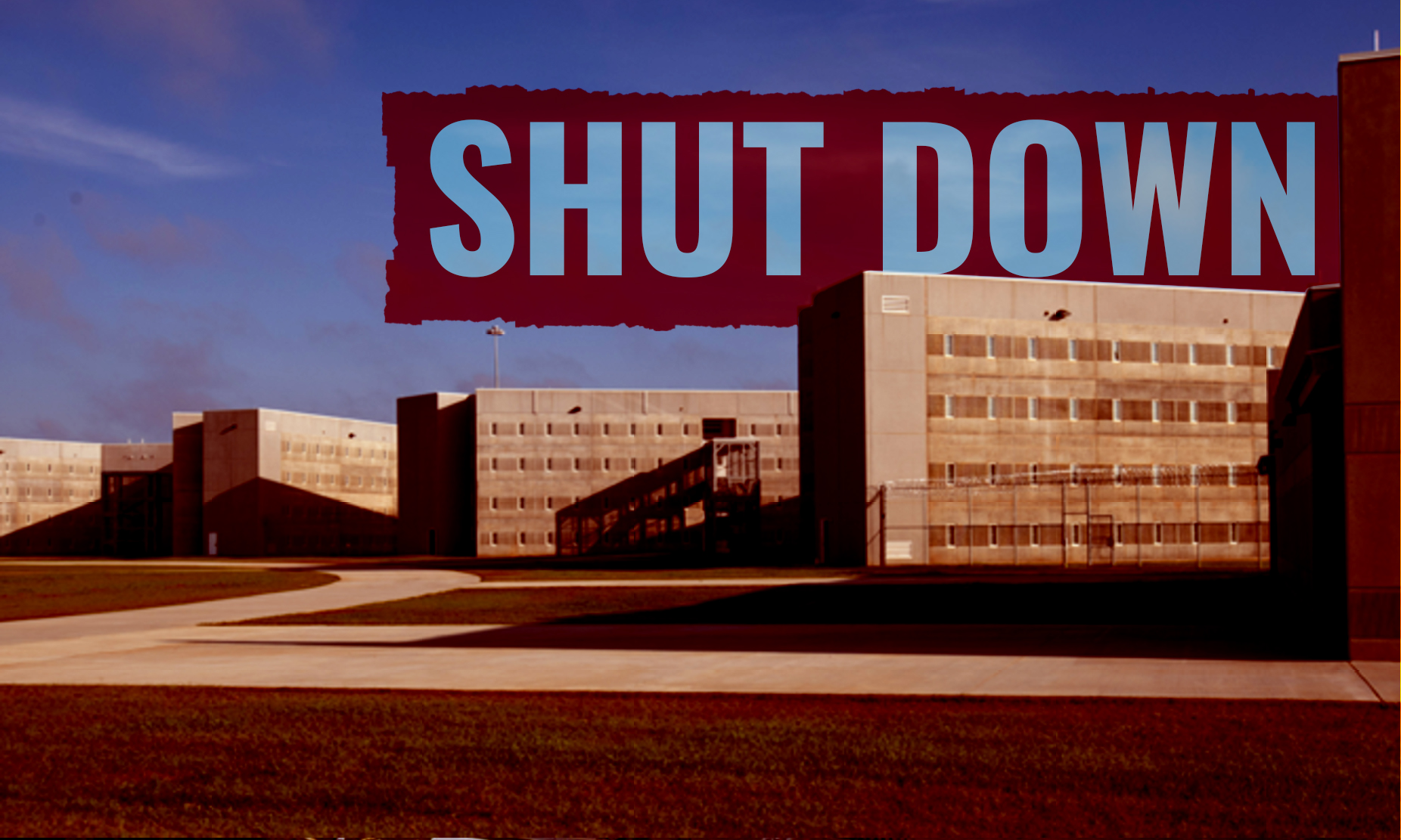 When the federal government has shut down in the past few years, correctional officers at a federal women’s prison in West Alabama were optimistic. They knew it would be short.

They were even optimistic — as optimistic as you can be when you’re not getting paid for your work — when they faced their first shutdown in 2013 after Federal Correctional Institution Aliceville became operational earlier in that same year.

Until this shutdown, the 2013 lapse in federal funding was the longest they’d experienced. This one is different. At 28 days and counting, the current partial shutdown is the longest in American history.

“There’s no comparison,” said Terrence Windham, a correctional officer who has worked at the facility for nearly seven years. “With this shutdown, there is a whole lot less optimism that things are going to change anytime soon.”

Windham is right. That reality he and his colleagues are facing — the reality of not knowing when they’re going to get their next paycheck or whether they’ll be able to pay the mortgage, their rent or utility bills — shows no sign of changing anytime soon.

And they have an 18-month-old child to care for, too.

Windham is among the 36,000 Federal Bureau of Prisons employees who are deemed “essential.” That means he has to work during the shutdown even though he won’t get paid until after the government reopens.

In total, an estimated 800,000 federal employees nationally, and 5,000 in Alabama, are facing a similar situation. They’re either working without pay or at home without pay.

I. “They want their money”

Negotiations between Congressional leadership and the president are stalled. They haven’t met since President Donald Trump walked out of a meeting earlier this month. Things are frozen.

Windham’s pay is frozen. So is his wife’s. She works at FCI Aliceville, too.

But the bills aren’t frozen. “And so you kind of have to figure out, okay, what bill are you going to pay and what are you going to hold off on,” Windham said. Earlier this month, a credit card bill tried to charge one of their accounts. There was no money left.

“I had to kind of shuffle some things around to pay that bill, but if I don’t get paid by next month, I don’t know what I’m going to do,” Windham said.

Thankfully, the Windhams are from Aliceville. They have family and friends to fall back on, and their family owns a funeral home, so he has some extra money to help pay the bills.

Other officers aren’t so fortunate.

“Creditors and lenders don’t care that it’s a shutdown,” Windham said. “They want their money. It’s not as simple as a lot of people think it is.”

The prison recently hired a number of new staff, too. Because of the schedule they started on, some of them haven’t gotten a full paycheck in more than a month Their first checks were only partial checks because the shutdown started just after they started.

“And they’re new staff. They don’t have a nest egg,” Windham said. “You know — young folks trying to get started in life. So this is very difficult for them. And for the older staff, mortgage payments are an issue.”

Things are already hard at FCI Aliceville. But they’re going to get worse next Friday. That’ll be the day they miss their second paycheck. Paying one month of bills is possible. Few families have enough savings to last beyond that.

“This second check is going to be the real cutter,” Windham said. “It hurt a lot of people, this first one, but the next one is going to be horrendous.”

It’s not just missing pay. For some, it’s extra costs. Most correctional officers at the prison don’t live in Aliceville, a small town of fewer than 3,000 people situated about 25 miles east of the Mississippi state line.

Most live in Tuscaloosa or Columbus, Mississippi. Both cities are nearly an hour’s drive away. Before the shutdown, workers were able to take federally subsidized transportation to and from work. Now they’re having to pay out-of-pocket for gas.

“Now people are having to use gas and spend money that they normally wouldn’t have spent to get to work,” Windham said.

Nationally, the average salary of a federal correctional officer ranges from $40,000 to $50,000 a year, and they work in a rare federal government position that includes the likelihood of being harmed or attacked on the job.

Even at a lower security women’s prison like FCI Aliceville, there is still the possibility of danger.

“There are still fights that are going on,” Windham said. “There are still drugs being smuggled in. It is still a prison just with an extra stressor. That’s what I’m worried about — people thinking about their home life at work and then putting themselves in a dangerous situation.”

Despite the difficulties facing the officers, they’re trying to push through it. Overall, Windham, who also serves as the local Association of Federal Government Employees union president, said morale is okay, considering the situation.

“They’re working, they’re having fun, making jokes about it, trying to make light of the situation,” he said. “They’re trying to keep their mind off of it. But when they’re at home, sitting alone or with their spouses, with their kids, they don’t know whether that next check is coming.”

Nationwide, The Washington Post has reported that the number of officers calling in sick has nearly doubled. In Aliceville, the union is encouraging workers to show up. Not showing up, they say, only affects those who do.

“We’re trying to encourage people to come to work, and they’re buying it, but it’s hard to buy something for such a long time. It’s painful to keep working and not get paid,” he said. Abandoning their job is not a message they want to send to politicians.

Nor is it a message they want to send to their inmates.

Some inmates work in prison. They get paid. Sometimes it’s as little as a quarter an hour, but they are still getting their checks, while the correctional officers aren’t.

“I’m not going to say all of them, but some of them here locally have made comments that they’re getting paid, and we are not — kind of jabbing at us,” he said. “So when you have to deal with not getting paid and the inmates are laughing at you and joking, it doesn’t bode well for the safety and the security of this institution.”

Aliceville is small. Less than 3,000 people. When the prison arrived in 2013, Pickens County’s population jumped by nearly 1,000 people, including new inmates and staff. The prison was a boon to the local economy.

Windham, in the little free time he has not at the prison, is also a city councilman in Aliceville, where his family has long resided. His grandfather started a local funeral home.

“From a city standpoint, now we’re not able to sustain our tax base that we’re used to because people aren’t spending,” Windham said. “People aren’t going out and spending money. That’s how cities survive. Once that gets negated, it starts hitting the city home.”

Folk have stepped in to help, though. Churches and local businesses have been helping furloughed and unpaid employees. The water board and gas board are waiving some fees. And Alabama Power is working on a case-by-case basis to help federal employees with their utility bills.

“It’s tremendous the outpouring that has been going on so far,” Windham said. “But if this thing lasts months or years, you know, people can’t go without getting paid. That hurts the economy locally as well.”

Trump has said he’s willing to let the shutdown last for months or even years over his dispute with Congressional Democrats — and some Republicans — who have refused to provide $5.7 billion for a border wall when it doesn’t include a broader immigration reform package.

Windham and his fellow correctional officers have a message for Washington.

The prison is in Rep. Terri Sewell’s 7th Congressional District. Windham said Sewell and her staff have been on the phone with correctional staff repeatedly since the shutdown begin. Next week, she plans to feed the correctional officers, Windham said.

Sewell, in a statement to APR, placed the blame on Republicans.

“I am working hard every day to reopen government while the Republicans sinfully and irresponsibly hold hostage the paychecks of our federal workers,” Sewell said. “From the moment Congress went into session, I have voted seven times to reopen our government. I am continuing to work with leadership on a real path forward, but we need a willing partner in the White House. The Senate Majority Leader must take up our House-passed bills and end the shutdown now.”

The majority of the bills the House has passed were authored and passed by Republicans, namely Republican Alabama Sen. Richard Shelby, in the Senate. But after Trump said he would refuse to sign them, Senate Majority Mitch McConnell halted the process.

“We don’t care about the wall,” Windham said. “If you want it, get it, and if you don’t want it, fine. But don’t use us a political pawn.”

Shelby started his chairmanship of the Senate Appropriations Committee with a lot of success. The Senate passed more timely budgets than it has since 1997. But the standoff over the border wall halted his progress.

“I am disappointed that this standoff has resulted in a prolonged partial government shutdown, which has hurt federal employees and their families throughout Alabama,” Shelby told APR. “I believe there is a way for us to work together to move toward serious negotiations involving the President and my colleagues on both sides of the aisle.  It is critical that we find a solution that will fund the remaining 25 percent of the government for the good of the American people, and it is my hope that we can accomplish this as soon as possible.”

But McConnell has said the Senate won’t vote until an agreement is reached with the president.

“We just want them to vote on something,” Windham said. “Let the president sign or not sign. But to not do anything is not an option anymore. Because on Friday, if people don’t get their checks, they’re going to have to make some hard decisions.”

The state is being sued by the U.S. Department of Justice over Alabama's deadly prisons.

Opinion | Take control of your energy budget during COVID-19

Summer is peaking and so are utility bills. Historically the July-September months are always the most expensive electric bills of the year. You’re most...