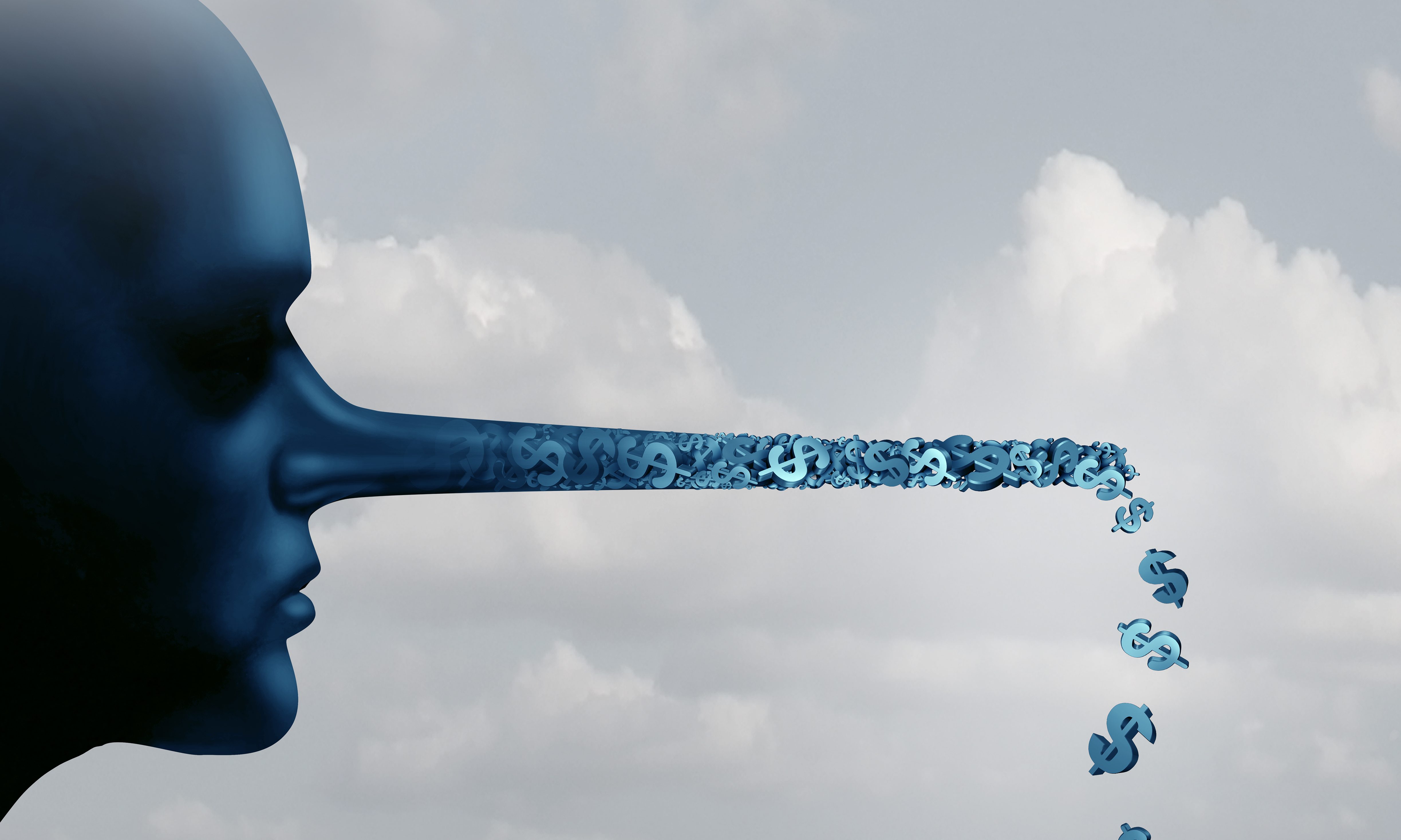 Business lies and financial deception in finance and economic dishonesty concept as a person with a long liar nose made of dollar signs with 3D illustration elements.

Many elected officials in Alabama profess profound allegiance to biblical teachings, but do they actually practice those principles?

In two distinct instances during the Legislative Session, promises made to individuals and the people of the state have been broken.

Jesus instructed his followers to let their words be true.

James 5:12 (KJV) restates Jesus’ message saying, “But above all things, my brethren, swear not, neither by heaven, neither by the earth, neither by any other oath: but let your yea be yea; and your nay, nay; lest ye fall into condemnation.”

The Pharisees who in biblical times were a politico-religious sect, in many ways like our modern-day religious lawmakers, had various oaths they would swear to and, depending on the type of promise they made, they could break them without it being seen as technically dishonest.

As a commentary on Bible Gateway explains, “Jesus confronted the Pharisaic practice of using various formulas to create different levels of oaths, some of which were considered less binding than others. The Pharisees could thereby bind themselves to their promises in various degrees and so excuse themselves from keeping commitments they had made with lesser oaths. They could use their oaths to sound exceedingly pious and to justify themselves as deeply religious while being in fact hypocritical.”

Two months ago, legislators promised that money from the gas tax increase would only be used for roads, bridges and the Port of Mobile.

The port was included in the gas tax measure because the federal government would pay 75 percent of the cost to expand the port.

But SB268, a bill filed by Sen. Arthur Orr and co-sponsored by 11 other senators, both Democrats and Republicans, diverts $10 million annually from the proceeds of the gas tax to fund repairs and construction at inland ports all around the state. (Or any other project if you read the fine print.)

Opinion | No surprise at all: Lawmakers are already trying to get their hands on gas tax money

So, here our pious lawmakers in the Senate promised not to pillage gas tax funds but did it anyway.

Politicians are not trusted because so many don’t keep their word. At least here in Alabama, some lawmakers are not inclined to keep their promises because they count on voters not paying attention or to vote straight party, which means there are no consequences for lying.

Being truthful has its own reward because even if people don’t like what you say, they can trust your word.

We are taught as children, or at least I was, that a person’s word is their bond.

Honest men and women do not need to swear on a stack of bibles or their mothers’ graves because if they say yes, it means yes, and no means no.

Another glowing example of a lawmaker giving his word and then breaking it is Sen. President Pro Tempore Del Marsh.

McClendon’s lottery legislation was similar to a bill sponsored by Marsh in 2015.

In 2015, Marsh penned an op-ed outlining the impact of his lottery bill on the state.

“Alabama lottery and casino gaming would create a $1.2 billion annual economic impact for the state of Alabama, and generate almost $400 million in new revenue for state programs, according to a new research study by the Institute for Accountability and Government Efficiency at Auburn University of Montgomery,” Marsh wrote. “In addition, the study found that more than 11,000 new jobs would be created if casino gaming were allowed at the current facilities located in Mobile, Birmingham, Macon and Greene County.”

Opinion | Del Marsh: Let the people vote on a lottery and gaming (2015)

Lottery legislation presented by McClendon would have created as many jobs and produced as much revenue as Marsh’s. But, at the 11th hour, Marsh blindsides his Senate colleague by joining forces with Sen. Greg Albritton to support a lottery that cost jobs and only raised about $150 million in income. In the bargain, Albritton’s bill also ensures the Poarch Creek Band of Indians not only keeps its gaming monopoly but can expand it exponentially.

Albritton is an agent of the Poarch Creeks. He makes no bones about the fact that he is doing the Tribe’s bidding. But what is worse is Albritton is representing the Tribe at the expense of the people of Alabama.

Albritton, a Mormon, certainly understands the teaching of his church.

“Nothing else is quite so despicable and cowardly as a lie,” said President J. Reuben Clark, Jr., who served as a counselor in the First Presidency of the Church of Jesus Christ of Latter-day Saints from 1933, until his death in 1961.

Perhaps Albritton wasn’t lying when he didn’t tell his friend, McClendon, that he was killing his bill. Maybe that’s just what cowards do. And perhaps he was being coy about how the bill profited the Poarch Creeks. He wasn’t telling everything he knew. Biblically, there are lies of omission and lies of commission. Surely, Albritton, a self-identified believer, knows that.

But why did Marsh change his mind? Why was his promise to McClendon breakable? Why does he now support a bill opposite the one he championed just a few short years-ago?

Only he knows the real reason, and he’s not straightforward about why he reneged on McClendon, but most likely it was to please the Poarch Creeks.

It seems the power of the Poarch Creeks even trumps Senate decorum if such a thing truly exists.

And so it appears that for some it is easy to claim one’s adherence to Jesus while blatantly disobeying the most basic tenets of his teachings.

Both the gas tax and the lottery are essential pieces of legislation. The lottery as it now stands is a gift to the Poarch Creek and a bust for the people. Albritton and Marsh know that is a fact.

Surely Orr and 29 other senators knew that a vote to divert gas tax money was a breach of trust.

But lying doesn’t seem to matter to those who like the Pharisees of old season – their oaths with a dash of hypocrisy.

What a difference it would make for our state if elected officials lived the words of Jesus instead on simply mouthing them for votes.