One of the legendary figures in Alabama political lore is Col. Floyd Mann.

The public safety director in those days was referred to as the head of the state troopers. It was during the Patterson administration that Mann made his mark in Alabama history.

The hot winds of segregation began to blow after the Brown v. Board of Education decision in 1954. They had reached a crescendo inferno in the Heart of Dixie by 1958.

There were buses of freedom riders who bravely traveled to Alabama and other Deep South states advocating for integration in the state and region.

They first arrived in Anniston and were met by a horde of Calhoun County Kluxers and would have been beaten to death if they had not hurriedly escaped before even departing their bus. The state troopers and every police system in the state were alerted that the Freedom Riders narrowly avoided death and that their bus was headed to Montgomery and that they needed protection.

Not surprisingly, Patterson and all the white law enforcement communities ignored the plea for help and security.

When the Freedom Riders arrived at the old Greyhound Bus Station behind the Federal Court House in Montgomery, they were met and surrounded by 50 to 75 white citizens who had baseball bats ready to welcome the Freedom Riders to the Cradle of the Confederacy. There was not one Montgomery policeman anywhere in sight.

Mann got word of the scenario. He immediately jumped into the head of public safety trooper car and drove 90 miles an hour down Dexter Avenue with his siren blaring. He wheeled into the parking lot and pulled his revolver out of his gun belt and placed it into the temple of the biggest, meanest, slicked backed, undershirted, baseball bat holder who was waiting at the door of the bus for the Freedom Riders. He said, “I’ll give ya folks five minutes to all clear out of here, or I’ll start shooting with this fellow and we will take names later for families.” Mann saved about a dozen Freedom Riders lives that day. They decided to not even exit their bus and to get the hell out of Alabama.

Let me share a great story that Mann personally shared with me.

Colonel Mann was destined to be a legendary lawman. He became chief of police of Opelika at an amazingly young age. Opelika is not a small town, and he was only 30. One day, one of his officers approached him and said, “Chief, we’ve got a problem you need to know about.” He continued, “You know officer ‘Big Un?’ About midnight every Saturday night, he comes into the station with some little scrawny hobo he has arrested down at the depot. They are always badly beaten up. Big Un weighs about 285 pounds, and I just don’t believe these hobos are fool enough to give him any resistance. Big Un is beating these folks up for the fun of it.”

Mann agreed that if that was happening, he would handle it. The following Saturday night about 30 minutes before the freight train was due in, Mann drove down near the railroad station, parked his car some distance away and then hid in the shadows. Sure enough, minutes before the train was to arrive, a police car pulled up and out stepped Big Un with his billy club in his hand.

When the train came to a stop, Big Un began walking alongside the freight cars, sliding the doors open looking for hobos. He opened a door and lying right in front of him was a man. Big Un slapped him across the head and ordered him out of the car. The hobo turned ever so slowly, and as he did, he laid the barrel of a pistol between the eyes of Big Un. The policeman froze in terror.

“Mr. Policeman,” the hobo said slowly. “I’ve got a momma in heaven, a papa in hell and a sick sister in Columbus, Georgia. I aim to see one of them tonight.”

Big Un barely got the words out of his mouth and responded as he retreated, “You tell your sister I hope she gets to feeling better.” 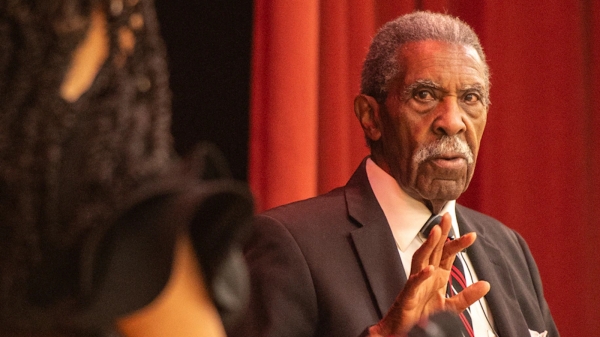 "He may have been one of the most important Alabamians unknown to people in and out of the state."

"The big money in next year’s election will be on the state legislative races."

"Governor Kay Ivey is the prohibitive favorite to win a full second term next year."