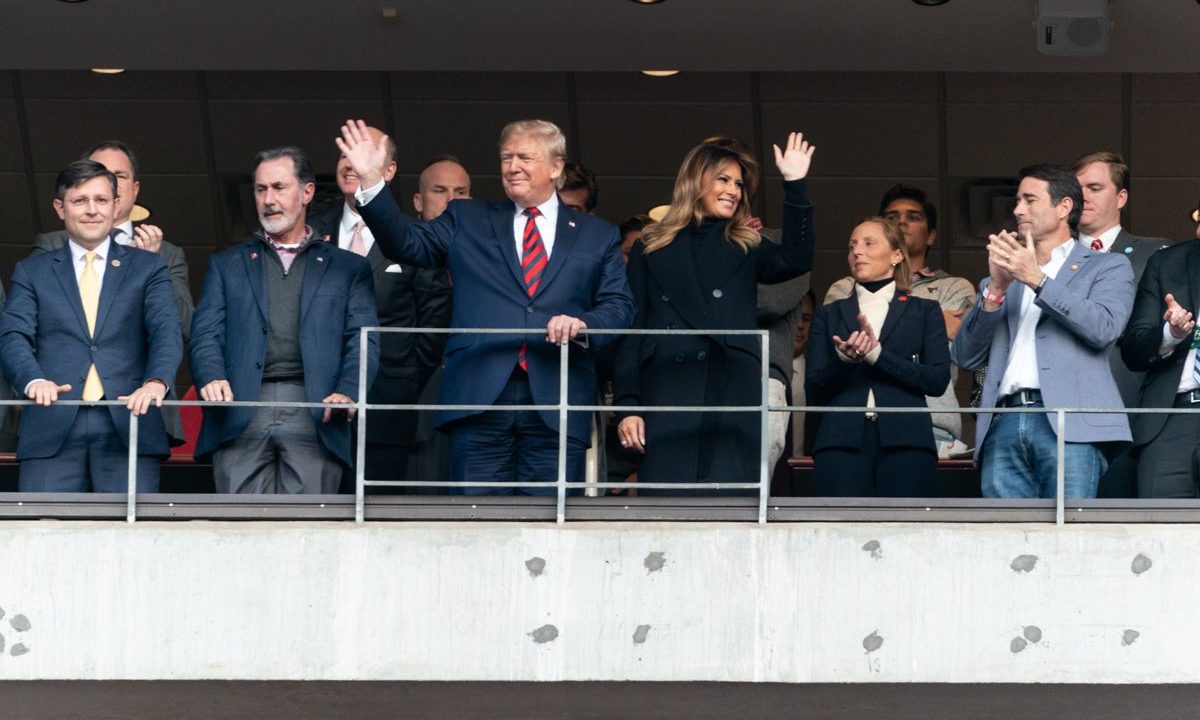 The President met with the Alabama football team before the game.

U.S. Senator Richard Shelby (R), Lt. Governor Will Ainsworth (R), and Congressman Bradley Byrne (R-Montrose) were among the dignitaries who joined the President to view the game.

“I was sitting with President Trump when he was introduced at the Alabama vs LSU game yesterday,” Byrne said on social media. “The stadium erupted with applause & U-S-A chants.
This is what America really thinks about President Trump, not the boos by DC elites.
The Fake News doesn’t want you to see this!”

Byrne is a candidate for the U.S. Senate seat currently held by Doug Jones (D).

Ainsworth said that he, “Enjoyed visiting and discussing policy with the President and First Lady. Proud of the roaring ovation they received and deserved.”

“Roll Trump Roll. Honor to have President Trump in Alabama,” Ainsworth added. “Thank you for everything you’re doing for America and Alabama.”

Former State Representative Perry O. Hooper Jr. (R-Montgomery) is a member of the President’s national campaign finance committee. Hooper told the Alabama Political Reporter that he was very pleased with the enthusiastic response from the people of Alabama. Hooper met with the President in Atlanta, just prior to the Tuscaloosa event and said that the President was excited about coming to Alabama and was interested in the U.S. Senate race in Alabama.

There were scattered protests in Tuscaloosa by persons disgruntled with the President and his policies. The Trump baby balloon came to Alabama to draw attention to one such protest. About fifty people were in attendance. One Trump supporters was so angered by the protest that he stabbed the balloon. The man was arrested by Tuscaloosa police.

The stabbing of the balloon drew national and international coverage by the news media. On Sunday morning, the story about the Trump baby balloon being attack was the most shared story that The Hill had written. It was leading their second, third, and fourth most shared stories combined.

While the President is trailing his major Democratic rivals in national polls less than a year out from the election, he is expected to easily carry Alabama and by a wide margin. Democrats are not expected to make any effort to even contest this state. Trump’s victory over former Secretary of State Hillary Clinton was the largest margin of victory by any Republican presidential candidate in the history of the state. Only incumbent President Richard M. Nixon’s victory over Sen. George McGovern in 1972 was a larger win on a percentage basis. The President does face two primary opponents in the Alabama Republican primary on March 3.

LSU defeated the University of Alabama in the football game. The loss leaves the Crimson Tide potentially in danger of missing the college football playoffs.

(Original reporting by The Hill and Fox News contributed to this report.)