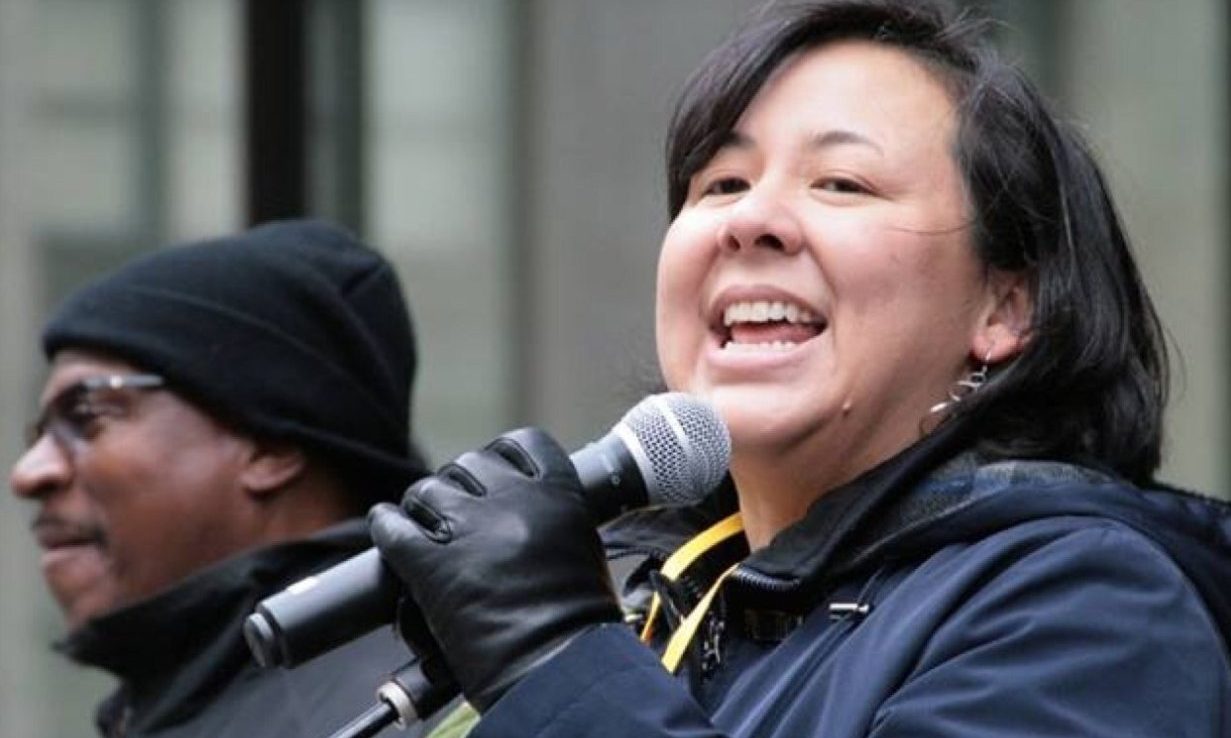 Internationally renowned human and civil rights leader Margaret Huang has been hired as the new president and chief executive officer of the Southern Poverty Law Center (SPLC) and SPLC Action Fund. She begins the role on April 20.

Huang, who currently serves as executive director of Amnesty International USA, has devoted her 25-year career to championing the rights of others, working for justice, fighting for human dignity and advocating against discrimination and oppression in the U.S. and around the world.

“I am thrilled to be joining the Southern Poverty Law Center at this moment and with this incredible staff and board as they rethink how to tackle their work fighting for justice and against hate,” Huang said. “Change in the South is coming, and SPLC is eager to work collaboratively with other social justice advocates to ensure that the change improves the lives of all communities.”

Huang is the architect behind Amnesty International USA’s campaigns to protect the human rights of migrants and refugees, torture survivors, gun violence victims, and activists and protestors globally. In this role, she has also worked with members of Congress on critical pieces of legislation; led several human rights missions to the U.S.-México border to hear from asylum-seekers and document abuses; accompanied three transgender youth across the border to seek asylum; and sent and led human rights observer delegations to Baltimore, Ferguson, Missouri and Standing Rock, North Dakota, to monitor and document police responses to protestors.

Members of Congress have called upon Huang for her expertise, inviting her to testify and speak on human rights issues, including human rights abuses in the temporary emergency shelter for unaccompanied children in Homestead, Florida; the draconian U.S. border policies and treatment of asylum-seekers; and the growing oppression of human rights defenders around the globe. She has also advocated before the United Nations human rights mechanisms and the Inter-American Commission on Human Rights.

“This is an exciting time at SPLC and I am thrilled that the Board has chosen Margaret to lead the organization and staff into the future,” said Baynes-Dunning, who will continue her role until Huang joins the organization in April. “She is a visionary, an extraordinary leader and we are proud to have her in the march toward justice.”

SPLC Board Chairperson Bryan Fair made the announcement via email this morning to the organization’s 350 employees in offices in Alabama, Florida, Georgia, Mississippi, Louisiana and the District of Columbia. In his email, he said the internal search committee, comprised of staff and board members, sought “a leader with a distinguished social justice record, a proven commitment to diversity, equity, and inclusion, strong management skills within a large social justice organization, and ingenuity and vision.”

“That led us to Margaret,” Fair said. “In her we have found those characteristics and more. Margaret’s leadership, passion for justice and strong track record of initiating and leading change, strengthening organizations, and innovating amid a rapidly changing legal and political landscape make her the best candidate to lead SPLC’s continued transformation.”

The search committee worked with Koya Leadership Partners to develop the candidate profile and conduct interviews with applicants for the role leading the Montgomery-headquartered organization, which celebrates its 50th anniversary next year.

“Our work is needed more than ever and we are well positioned to have a tremendous impact on the communities we serve,” said SPLC Action Fund Board Chairperson Alan Howard. “Under Margaret’s leadership, the Center will be able to build on a legacy that has already helped millions of people not only in the South, but across the country, and we are excited to have her lead the team.”

Huang, a Tennessee native, previously served as the executive director of the Rights Working Group, which focused on protecting human rights and civil liberties of communities in the post-September 11 era. She also served as director of the U.S. program at Global Rights, program director of the Robert F. Kennedy Center for Human Rights, program manager at The Asia Foundation, and committee staff for the U.S. Senate Foreign Relations Committee. She received a Master of International Affairs from Columbia University and a Bachelor of Science in Foreign Service from Georgetown University.

“I’ve had the pleasure of working with Margaret for over 15 years and she is a tireless advocate on human rights, and brings both deep knowledge and passionate activism to SPLC. She takes the helm at this crucial time as we face renewed hate violence, bigotry, and discrimination around the country, and SPLC’s work is vital. Margaret’s tenacity and ability to navigate tough situations will serve the civil and human rights movement well, and we are fortunate to have her continue in the fight in her new role.” — The Leadership Conference on Civil and Human Rights President and Chief Executive Officer Vanita Gupta

“Margaret Huang is a dynamic human rights leader with a proven track record of achieving results in these challenging times. She has transformed Amnesty International USA through integrated advocacy that combines research, mobilization, and advocacy. The work of the Southern Poverty Law Center has never been more crucial, and under Margaret’s leadership, SPLC’s best days surely are ahead.” — ACLU Executive Director Anthony Romero

“I have had the pleasure of working with Margaret Huang for almost two decades beginning with her extraordinary leadership of the Rights Working Group, which was a coalition of human rights, criminal justice, civil rights and immigrant rights groups seeking to protect the civil liberties and human rights of everyone in America, including immigrants, in the wake of 9/11. Under her leadership, Amnesty USA regained its footing and became an even stronger voice for human rights in the United States, as well as around the world. She has a lifelong commitment to human rights and social justice and is adept at uniting people across very diverse perspectives to work on a shared agenda. She is the rare leader who has both the ability to articulate a compelling vision and the talent to manage complex organizations to achieve their goals. A woman of incredible integrity, wisdom and compassion, she is the right leader to help chart the Southern Poverty Law Center’s next chapter at a most critical moment in America’s journey to fully living up to the most fundamental of its principles.”— Karen Narasaki, human and civil rights leader who served as a commissioner on the United States Commission on Civil Rights

“I have known and worked with Margaret Huang for 10 years and am very excited that the Southern Poverty Law Center has chosen her as their next leader during this moment in history in which the advancement of civil and human rights is under attack. Beyond being an internationally recognized human rights expert, Margaret is an exceptional and well-respected organizational leader. She is a brilliant strategist, a powerful thinker, a skilled team-builder and an Inspirer-in-Chief. I have great confidence that she will bring new vision, energy and vitality to SPLC’s work and mission, grounded in the arc of SPLC’s very best history and bent towards an exciting future vision of justice.” — Center for Constitutional Rights Executive Director Vince Warren

“I have known and worked with Margaret Huang for over 15 years and I can’t think of a stronger leader to take the Southern Poverty Law Center into the future. At a time when the stakes could not be higher, Margaret’s unique combination of moral compass, vision and energy are precisely what is needed.” — National Domestic Workers Alliance Co-Founder and Executive Director Ai-jen Poo

“Margaret is an extraordinary leader and she is absolutely the right leader at the right time for the Southern Poverty Law Center. Her entire career has been spent fighting discrimination, promoting equality and advocating for the fundamental human rights and dignity of every person. As a woman of color who grew up in the South she has lived experience of discrimination. As a nonprofit leader she has led coalitions, strategized for change, and become a global leader in the fight for fundamental human rights. Most importantly, she garners respect from every individual who works with her, staff, board, volunteers and allies. The Southern Poverty Law Center is lucky to have her lead them into this new era and all those concerned with justice and equality are lucky to have her leading the struggle.” — Student Press Law Center Executive Director Hadar Harris

“SPLC has been one of our closest and most stalwart colleagues in the struggle to secure equality and justice for LGBTQ people. We are thrilled to welcome Margaret Huang in this important new role and excited that a human rights advocate of her stature will be leading SPLC at such a critical time in our nation’s history.  We look forward to continuing our relationship with SPLC and furthering the work of securing justice and dignity for all in the South and beyond.” — National Center for Lesbian Rights Legal Director Shannon Minter

“It’s exciting to see Margaret assume the leadership at SPLC at this moment in history. As we confront the challenges of the climate crisis and growing corporate greed, as well as the threats to our democratic system and processes, we need organizations like SPLC to build collaborative efforts across the south and the nation. Margaret’s commitment to working in partnership and to listening to directly affected communities will facilitate SPLC’s work to drive sustainable change and protect the rights of all communities.” — Wallace Global Fund Executive Director Ellen Dorsey

Advertisement. Scroll to continue reading.
The Southern Poverty Law Center, based in Alabama with offices in Florida, Georgia, Louisiana, Mississippi, and Washington, D.C., is a nonprofit civil rights organization dedicated to fighting hate and bigotry, and to seeking justice for the most vulnerable members of society. For more information, visit www.splcenter.org.
Staff