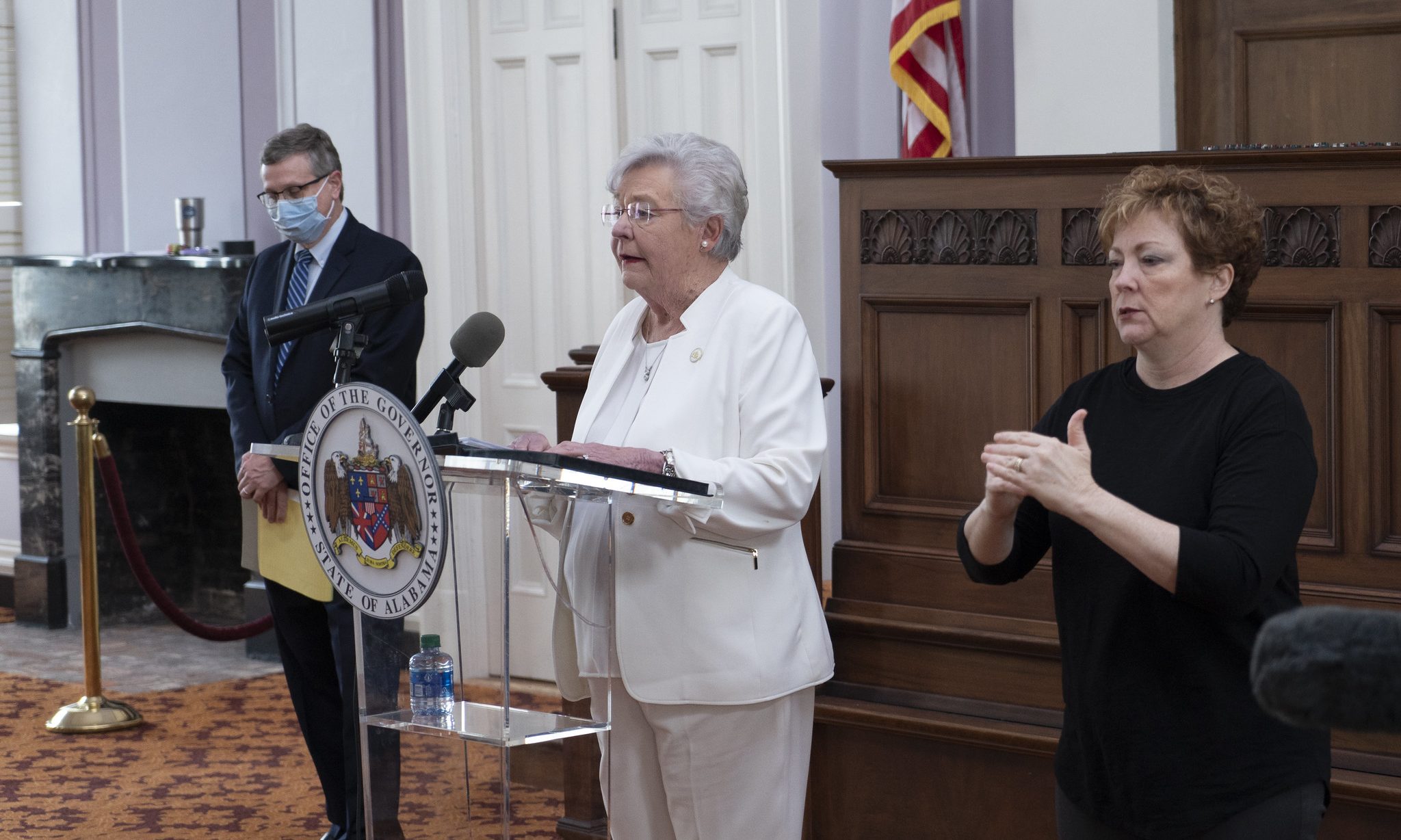 Gov. Kay Ivey said Friday that she will relax more provisions in her “safer-at-home” order amid the COVID-19 crisis, including allowing restaurants, bars, gyms, barbershops and salons to reopen with social-distancing restrictions.

State Health Officer Dr. Scott Harris’s amended order also allows non-work-related gatherings of any size, so long as people can maintain at least 6 feet of physical distancing, a change from the previous order, which limited such gatherings to 10.

The change in the numbers of people who can gather mean worship services, weddings and funerals will be able to restart, but Harris cautioned that they can only do so while also meeting the 6-feet distancing rule.

“I would encourage churches and other houses of worship to please again look at our website for guidance that we have suggested there for people to consider,” Harris said. “We just want you again to think about protecting those people who are most vulnerable.”

Harris said several hundred cases and as many as 50 deaths were directly or indirectly connected to a church event in East Alabama.


The changes announced Friday will also open the state’s beaches to gatherings of any size, with the same 6-feet distancing rule.

“Because I know how the people of Alabama are responding and paying attention while heeding the good public safety and health warnings, Dr. Harris and I are comfortable that we’ll be able to continue a measured approach,” Ivey said during a press conference Friday. “Let me be crystal clear to the people of Alabama. The threat of this disease continues to be active, and it is deadly.”

Ivey and State Health Officer Dr. Scott Harris reviewed recommendations from the state’s coronavirus task force and other groups this week about proposed changes to Ivey’s safer-at-home order, which was to expire May 15.

Ivey’s decision comes after much pressure from Republican state lawmakers and business groups who want to reopen the state’s economy more quickly — if not immediately.

Harris said there are nearly 9,100 confirmed COVID-19 cases statewide. At least 371 people have died from the virus.

“Test numbers have been, over the past several days, fairly flat,” Harris said. “Yet there’s still disease transmission going on at the community level.”

Over the last seven days, Alabama confirmed more COVID-19 cases in the state than at any point since the pandemic began. The state confirmed its first case in mid-March.

Harris urged the public to continue to stay at home when at all possible and to practice good hygiene — washing hands often and covering their face — and said older people and those with health issues should continue to minimize travel.

All businesses under the new order will still be required to maintain a 50 percent occupancy rate, social-distancing and sanitation rules.

Harris said the state has made good strides in increased testing, and are doing “more than ever.”  The state is also working to expand contact tracing to track and isolate new cases.

“We are working on contact tracing through a number of different options,” Harris said, adding that school nurses are slated to begin helping the state health officials do that work.

Asked by a reporter why Ivey was reopening more of the state’s economy after Alabama has shown a rise in cases over the last seven days, Ivey said she has the responsibility of looking after both the economic well being of Alabamians and the state’s economy, as well as health and safety.

“And because the people of Alabama are vigilant, and they abide by the rules, we do believe that it’s okay to expand these orders and provide additional opportunities for people to go back to work,” Ivey said.

A reporter asked Harris the same question, about the rise in cases in the last seven days, and Harris said new cases “have been a little higher than they have the weeks before.”

“We do know that we’ve increased testing somewhat, so we’re trying to sort out how much of the increase could be related to just testing and how much might be additional disease,” Harris said. “It’s probably contributed to but both of those I would think would be playing a role there.”

In Alabama, even as the number of tests performed has increased, testing has remained largely limited to symptomatic cases and those in high-risk groups like health care workers and long-term care facility residents and employees. As of Thursday, about 31 percent of the state’s positive cases were among those three groups.

Based on our analysis, using seven-day averages, the positivity rate in Alabama got as low as 3 percent on April 30, before starting an increase again.

Harris said 602 patients are currently hospitalized throughout the state who have been confirmed as having COVID-19. And then another “348 or so” who were hospitalized awaiting a test.