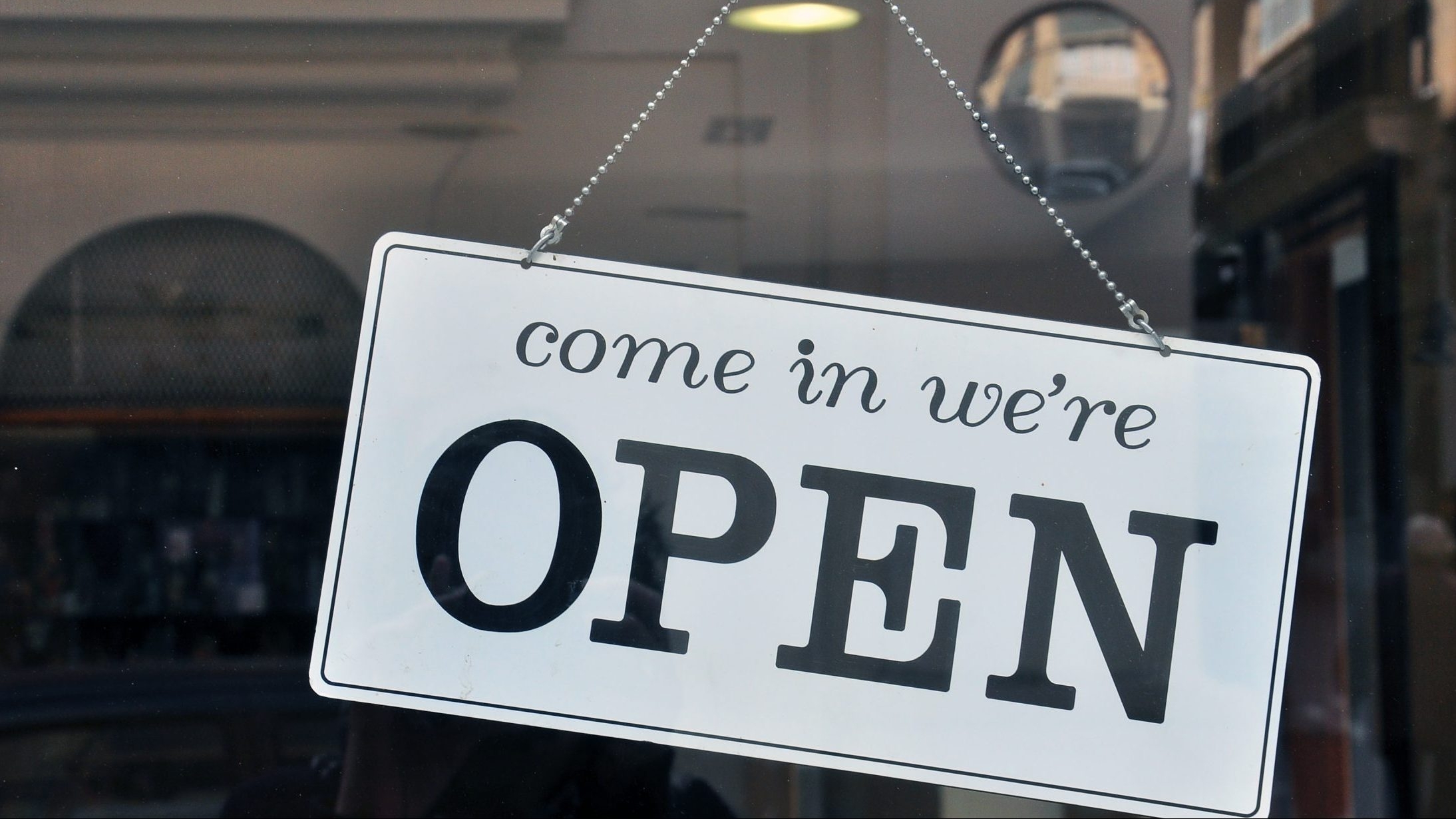 Alabama has partially reopened the state’s economy after a COVID-19 shutdown. How has that worked out?

Bluntly, re-opening Alabama’s economy has not worked out well and may become disastrous. Our lack of leadership, of planning and of resolve to do what is right has left us with too many sick, too many dead, and too many unemployed, and with many more to come. To focus on what we should do from here forward, let’s discuss below what can a government do, what Alabama said it was going to do, what Alabama did, and what Alabama should do.

What can a government do to minimize COVID-19 problems?

In my personal order of priorities, COVID-19 problems mean the number of dead, the number of sick (measured by positive tests and hospitalizations), and the number of closed businesses and unemployed. Looking at what other countries have done can tell us what works and what we can do better. The following discussion is arguably over-simplified, but gives what we might do to limit the numbers of dead, sick and unemployed.

One option is a government doing almost nothing. The U.K. flirted with and Sweden started down this path, hoping to build herd immunity. Both decided the COVID-19 numbers of sick and of dead were too much and changed course. Brazil seems to be partially on this path; the deaths there now are second only to the United States and Brazil is adding now proportionally about twice as many daily COVID-19 deaths as the United States.

A second option is COVID-19 testing, tracing and quarantining, plus wearing masks, strong social distancing, and similar measures. As an example, South Korea has more than ten times as many people as Alabama packed into a country that has less than three-fourths as much land (population density makes viruses more likely to spread). Yet, South Korea has one-third as many COVID-19 deaths as Alabama and has similarly fewer sick. In other words, South Korea thus far is doing about 30 times better than Alabama.

Moreover, while South Korea has closed schools and economically closed some small areas, it has not had a general economic shutdown, with high unemployment, as Alabama has (and as most other states here have). Primarily, South Korea tests lots of people, traces those with whom the sick have been in contact, and quarantines the sick and the exposed, avoiding much of the economic shutdown.

A third option is, when the numbers of COVID-19 sick seem to be getting too high, shutting down the economy. This option necessarily relies on judgments about what numbers are too high and predictions on what will happen several weeks away, since COVID-19 exposure can turn into COVID-19 sickness weeks after exposure.

When the numbers decline, one can then gradually re-open the economy and close it again if the numbers rebound. This option is essentially the path Alabama has, and almost all states in the United States have, thus far chosen. And our nation has the most COVID-19 sick and dead in the world, our unemployment has sky-rocketed, and we have undertaken unbelievable federal debt to avoid economic collapse.

What did Alabama say it was going to do?

On April 20, 2020, the Alabama Political Reporter published my article about when should Alabama reopen its economy. At the time, Governor Ivey had just issued a formal statement indicating that Alabama would follow the White House Guidelines for “Reopening America,” issued April 16, 2020.

The White House Guidelines for “Opening Up America Again,” released April 16, 2020, proposed a three-phased reopening of states, if the state had a downward trajectory for a 14-day period for COVID-19 symptoms and cases, and said Governors should make these decisions. Before proceeding to a three-phased opening, the Guidelines proposed gating criteria that (1) a state’s COVID-19 symptoms and cases for a 14-day period have a downward trajectory and (2) its hospitals have treatment of all patients without crisis care and have a robust testing program, including emerging antibody testing, in place for at-risk healthcare workers.

In addition to the Governor, a physician with the Alabama Department of Public Health on April 17, 2020, when talking about reopening the Alabama economy, said: “We are starting to see some decrease, but we are not seeing the level we need to see yet.” She also gave three requirements for lifting the shelter at home order: (1) A steady decline in positive COVID-19 tests, (2) more available COVID-19 testing, and (3) a drop in cases. On April 20, 2020, State Health Officer Dr. Scott Harris made similar comments.

What has Alabama done when re-opening its economy?

Alabama did not follow the Guidelines. Arguably, the state did at first. Then, the state did not. And the numbers and trends of new COVID-19 cases say that we might be in trouble. 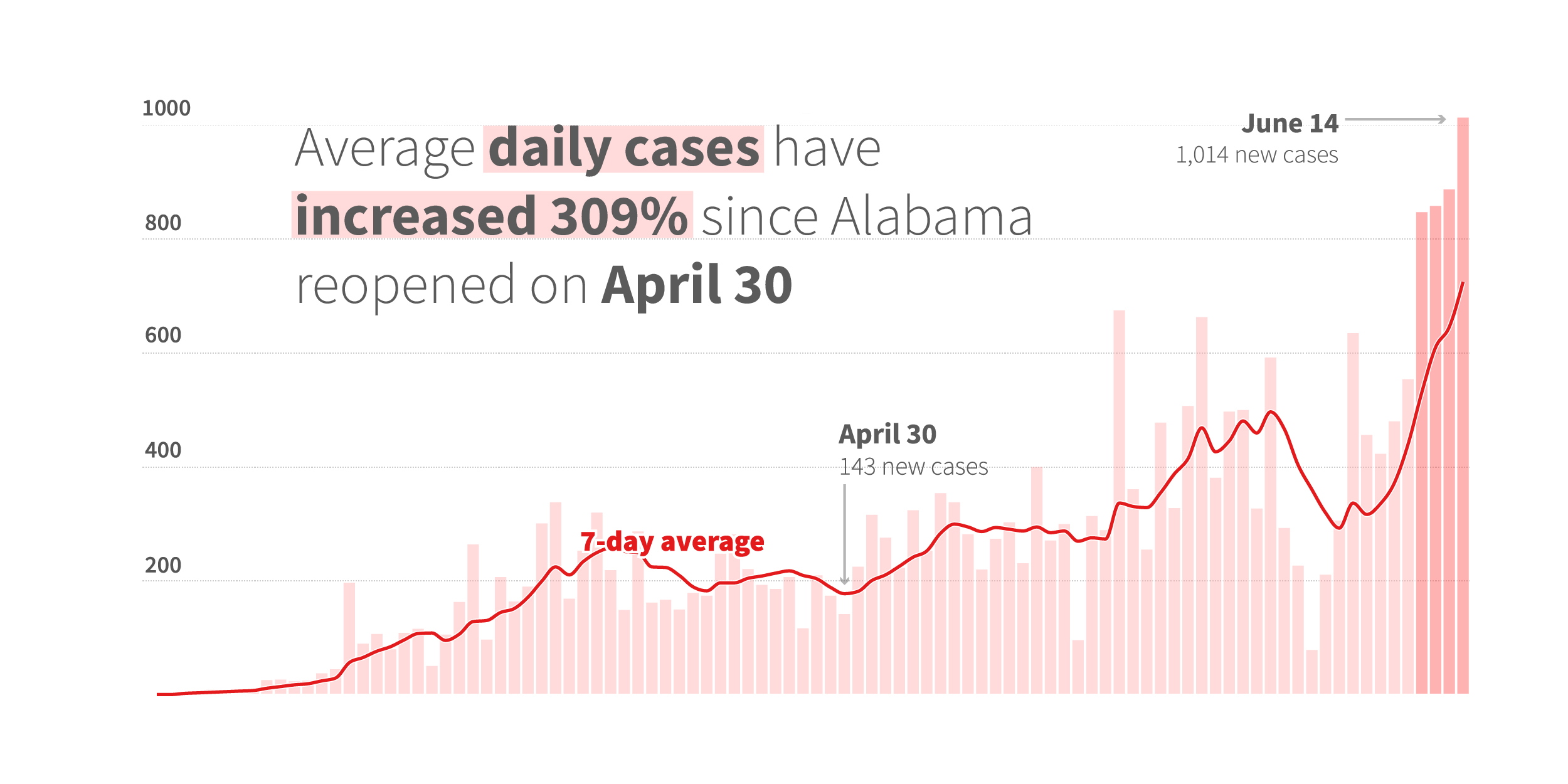 On May 8, 2020, the Governor issued an “Amended Safer at Home Order,” adding restaurants, athletic facilities, and close contact service providers (barber shops, hair salons and nail salons) to what could reopen. This order made Alabama the fourth most open state in the nation. Still, more COVID-19 testing was not being done. Moreover, the number of cases had not only rebounded but had jumped to a 7-day average of 299 on May 8, 2020.

On May 21, 2020, right before the Memorial Day Weekend, the Governor issued another “Amended Safer at Home Order,” adding entertainment venues, educational institutions, and child care facilities to what could open. Still, more COVID-19 testing was not being done. Moreover, the number of cases had jumped to a 7-day average of 330 on May 21, 2020.

Perhaps more important than the Governor’s amended orders could be the perception of many people in Alabama that Alabama was back to business as usual. Alabama even attracted national attention for people not taking coronavirus precautions Memorial Day weekend. Based on the news reports, even the Alabama Department of Public Health raised concerns about a spike in cases two or three weeks after Memorial Day weekend.

Generally, a high percentage of positive tests indicate that not enough people are being tested. For example, South Korea’s positive test percentage is less than 2 percent. So, Alabama has recently been testing fewer people and still has more sick people.

What should Alabama do now?

Even a slum in India has been able to turn around its COVID-19 numbers with the testing, tracing and quarantining approach. Surely, we can too.

Learning from the success and failures of others, Alabama should test lots of people, trace those with whom the sick have been in contact, and quarantine the sick and the exposed. The tests should be free and the results and tracing almost immediate. Doing this is going to take resources, but the expense should be much less than not turning around the numbers.

Alabama should also convince its people to wear masks in public to protect their neighbors, practice social distancing, and take other common-sense measures. The Governor’s Orders have recommended these types of steps. So, the issue appears to be a leadership issue of reaching people and convincing them to do what is right.

These efforts probably will not be as successful as in South Korea, because Americans resist being told what to do even when it is clearly best and because people travel between states so much. This means another important step would be to convince Georgia, Florida, Mississippi and Tennessee to take similar steps.

In April and even May, taking these steps probably were not possible. While South Korea was ready, the United States was so ill-prepared for the coronavirus that we did not even have adequate masks, much less working tests. Surely by now masks and tests are available.

To be fair to our state, the federal government should have taken the lead on these issues, instead of pushing almost all responsibility to the states, and several other states among the most suffering have similar difficulties as Alabama. But Alabama can take care of its own people. Let’s do it.

Chris Christie is a guest columnist who regularly writes for the Alabama Political Reporter.