Alabama on Monday saw a new record number of patients in hospitals with COVID-19, and while the hospitals are managing well now, that could change if the trends of rising cases and hospitalizations continue.

Alabama’s hospitals were caring for 715 COVID-19 patients on Monday, more than any other time during the pandemic, and follows a previous high of 694 on June 25.

UAB hospital was caring for 74 coronavirus patients on Monday, the highest number of patients that hospital has seen since the pandemic began.

UAB Hospital went 70 days — from April 4 to June 13 — without seeing a new in-house high in COVID-19 patients, but since a new high on June 13 the hospital has seen four additional record highs in hospitalizations, including three in the last five days. 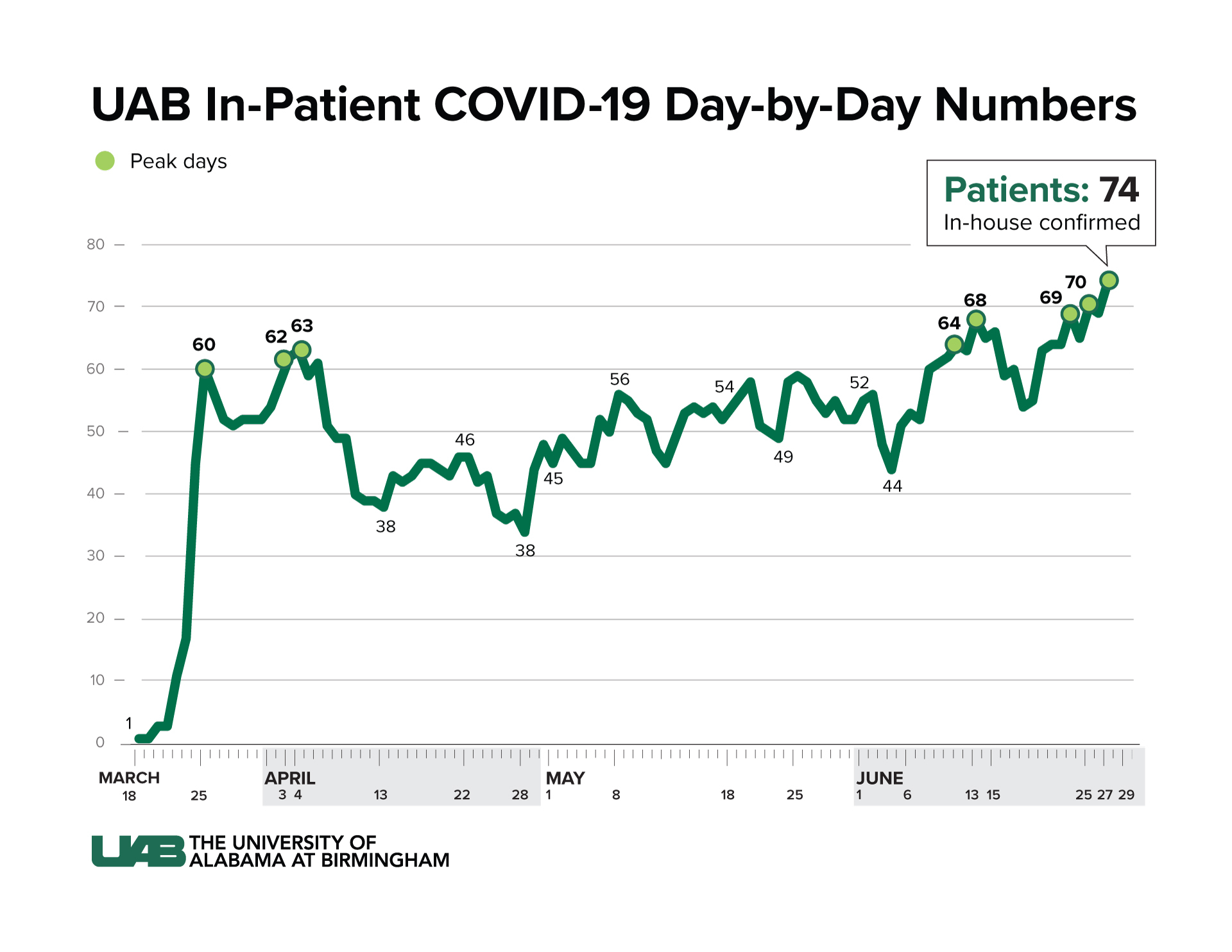 “The general numbers do show that we have a real problem now with COVID in the state, and a real problem with community transmission,” Williamson said.

Due to delays in data collection, Monday’s COVID-19 numbers included figures from Saturday and Sunday, so the daily new case count is skewed and shows the state added 1,718 cases Monday.

Because of the inflated numbers Monday, a better indicator would be the seven-day and 14-day rolling averages of new cases, both of which were still at record highs Monday despite correcting for the day-to-day variability of case counts.

Also troubling is the percentage of COVID-19 tests that are positive, a sign of continued community spread.

There have been 36,682 coronavirus cases in Alabama and 905 deaths, according to the Alabama Department of Public Health. Of those cases, 18,886 people are presumed to have recovered.

A week before Memorial Day, the state’s hospitals were averaging around 500 COVID-19 patients a day, and the number has steadily risen since, Williamson said, and he worries about what may happen in the weeks after Fourth of July celebrations.

“If the trend holds and if we pick up 150 cases after a holiday, we can very easily be at 800 cases by some time in July,” Williamson said, adding that if any substantive portion of those patients need intensive care beds it could dramatically reduce the amount of available ICU beds for everyone.

“This is community spread, but if you add a point source outbreak of a big nursing home in a community on top of that, that could overwhelm the system,” Williamson said.

The state’s supply of available ventilators Monday was roughly 900, Williamson said, and there were roughly 345 open intensive care beds across the state, but with schools set to reopen in August, there’s a concern over new outbreaks. That’s what makes getting cases under control now so important, he said.

Williamson noted that a larger percentage of new cases are among younger people — according to the Alabama Department of Public Health those aged 25-45 make up 41 percent of all the state’s cases — and while younger people typically fare better with the virus, they can transmit the virus to others.


Williamson pleaded with the public to wear a mask and practice social distancing, and to spend their Fourth of July safely — with the knowledge that reducing large gatherings, keeping that distance and wearing a mask can save lives.

“It’s absolutely essential that we try together to get this under control,” Williamson said.

As ADPH continues to fight the spread of the virus, the department announced Friday that officials from the Centers for Disease Control and Prevention are in Alabama helping in that effort.

The five-member team from the CDC will be in Alabama until July 3. The team is helping ADPH streamline COVID-19 reporting, develop county-level indicators and study the state’s response to offer ways to improve, according to a press release from the department.

“The expertise of these public health professionals will further our staff’s abilities to assess our processes and will help guide us in our efforts to protect the public during this pandemic,” said state Health Officer Dr. Scott Harris in a statement. “We are grateful for the partnerships we have with CDC and other authorities at the local, state and federal levels.”