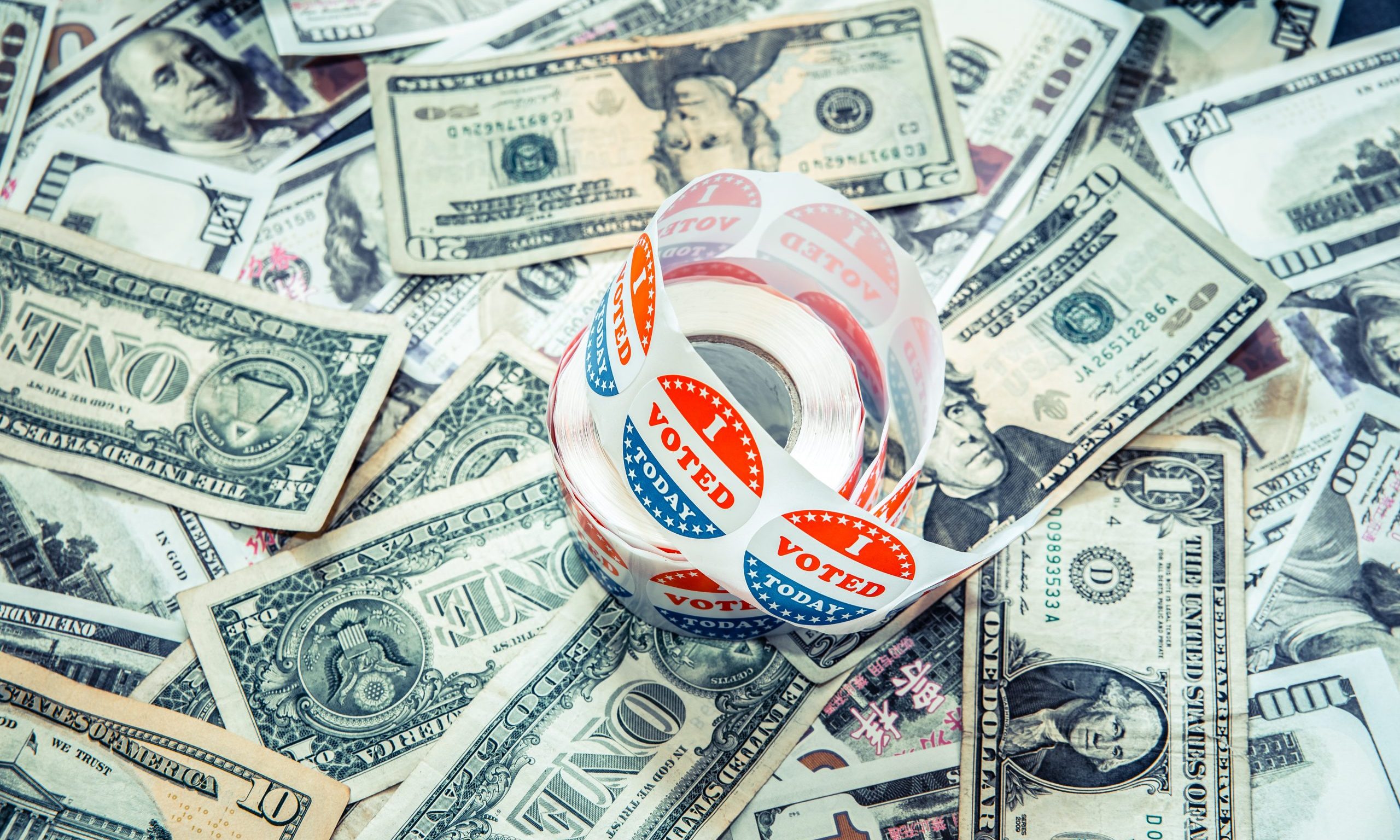 I vote Today stickers on a pile of American dollar bills, political election concept of economy and democratic elections in the USA.

The Brennan Center For Justice released a two-minute video Wednesday featuring the voices of six election officials from across the country, including Bullock County, Alabama, Probate Judge James Tatum. This bipartisan group uses the video to talk about why they feel that they need federal funding in the next stimulus package in order to help keep the November election “safe, secure, accessible, and reliable.”

“I cannot emphasize enough that we all should work together — Democrat, Republican, Independent, young, old; it doesn’t matter,” Tatum added. “Everyone needs to come together to make sure that the democracy process take place.”

The election officials in the video make the point that due to coronavirus concerns, more people are voting absentee than ever before. This generates more work for election officials and more costs. They feel that the federal government can help make this election safer and more secure by providing emergency funding to elections officials as part of the next coronavirus relief package that is being debated in Congress now.

Congress has already provided $400 million for emergency funding for elections in the CARES Act. The Brennan Center, however, wrote that a survey of election costs in five states shows that the $400 million in the CARES Act would only cover ten to eighteen percent of what those states need to safely and effectively administer elections during the pandemic.

“What Congress has provided so far is not enough to run safe and secure elections in 2020,” Derek Fisher and Elizabeth Howard wrote for the Brennan Center. “Our review shows that the March 27 grants will likely cover anywhere from less than 10 percent of what Georgia officials need to around 18 percent of what Ohio officials need.”

“Second, local election jurisdictions bear the heaviest burden of protecting voters and workers during the election,” Fisher and Howard wrote in their report. “In two of the states we examined, local governments must cover over 90 percent of the costs needed to ensure safe and secure elections this year. In all five states, they will bear the overwhelming share of such expenses.”

They claim that the money is needed to develop the infrastructure necessary to support changed voter behavior, protect voters and election workers during elections by giving poll workers PPE, allowing curbside voting, cleaning polling places, and ensuring that election staff can work off-site as needed without exposing election offices to cyberattacks, and to educate the public about changes made to election procedures and polling locations including notice of changed elections, moved polling sites, and new voting options to reduce density at in-person locations.

“The measures that we appraise in this document are critical,” Fisher and Howard wrote. “They come from our discussions with numerous election officials in each of the five states we examined. States need help.”

Some states have consolidated polling places in response to the COVID-19 threat. The Brennan Center, however, says that an analysis finding that despite a surge of absentee voting, consolidating polling locations in Milwaukee reduced turnout by nearly 9 percentage points, disproportionately affecting Black voters.

Unlike some states, Alabama does not have vote by mail, multiple days and even weeks to vote, or electronic voting like some states do. Because of COVID-19 fears, Alabama is allowing voters to vote by absentee using COVID-19 as an excuse. If you are infected with the coronavirus or are just afraid that you might contract the coronavirus by voting in person you may obtain an absentee ballot.

Alabama Secretary of State John Merrill has already rejected curbside voting and stated that all Alabama polling places will be open. Poll workers did have PPE at polling places during the July 14 Republican and Democratic primary runoff elections.

You must have a valid photo ID in order to participate in any Alabama election, and you may only vote at the polling place which you are assigned. Those rules did not change.

Bullock County is a Black Belt county on the eastern side of the state with a population of 10,138 people in 2018.

At least 1,357 Alabamians have died in the coronavirus global pandemic, including 431 in July alone.