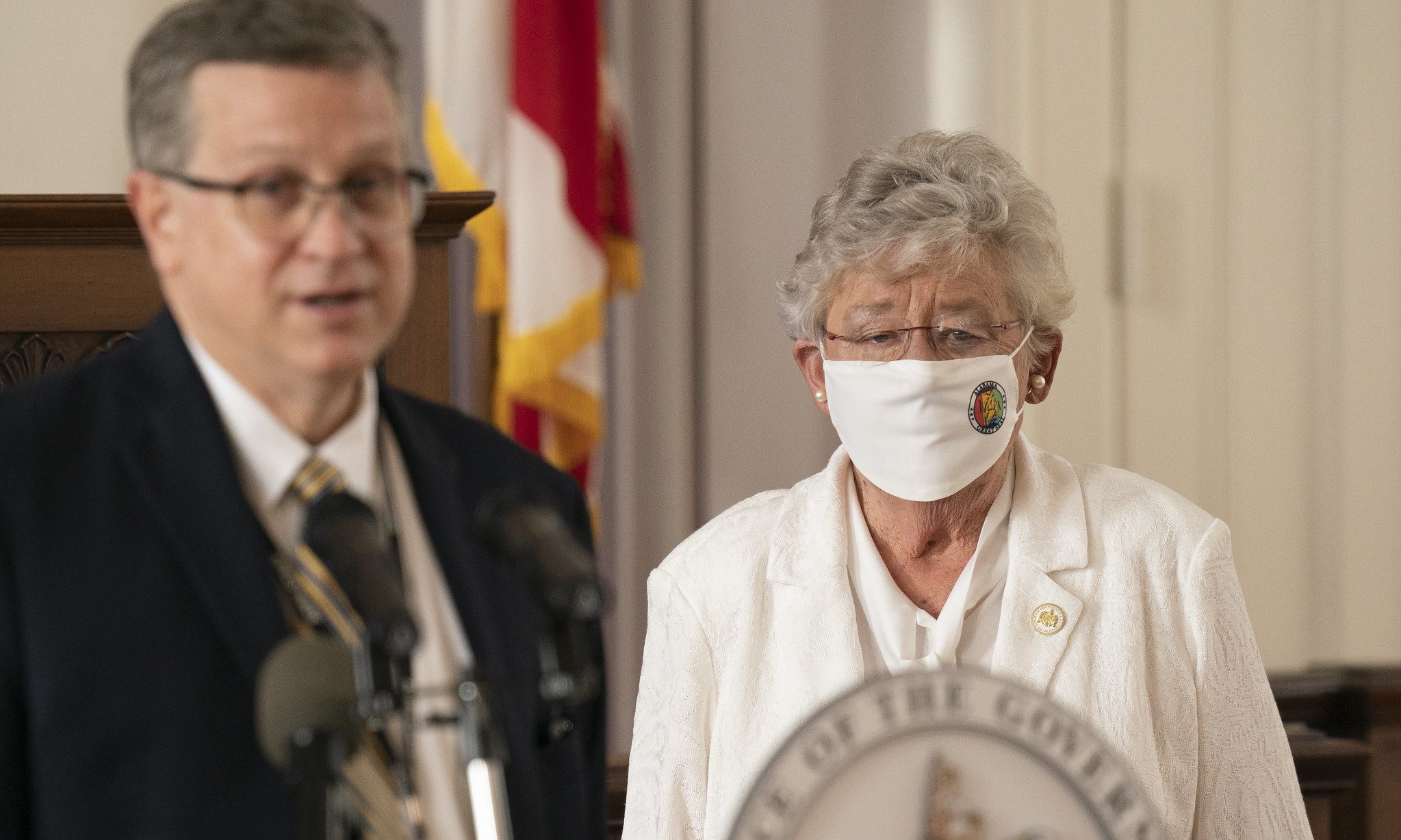 Over the last three months, Gov. Kay Ivey’s coronavirus task force has met by phone twice, and in that time the state’s confirmed COVID-19 cases grew by 72,590 and confirmed coronavirus deaths grew by more than 500 percent.

Ivey also formed a coronavirus task force executive committee, which has met just three times, and met last on May 4.

But Ivey’s office says that throughout the COVID-19 pandemic, Ivey and her staff have stayed in regular contact with State Health Officer Dr. Scott Harris, Alabama Department of Public Health officials and other experts — and that the task force is just one of many avenues that Ivey and her staff use to discuss coronavirus and the state’s response.

“As we have seen throughout this pandemic, the governor has taken a thoughtful and measured approach, and she is adamant on doing so with the best possible information, even as we see data continuously changing during what are uncertain times,” said Gina Maiola, Ivey’s press secretary in a message to APR.

Ivey announced the formation of the 18-member task force on March 6, seven days before she declared a state of emergency over the threat COVID-19 posed to the state. At the time, Alabama hadn’t yet had its first confirmed case.

The task force held six teleconferences in March, four in April, one in May and one in June. It last met by phone on June 29, according to records of those meetings provided to APR by Ivey’s office through a records request.

On April 14, the governor announced the creation of the six-member executive committee, composed of members of the task force, which was charged with mulling recommendations on reversing some of Ivey’s restrictions meant to slow the spread of the virus.

The executive committee, chaired by the state’s finance director, Kelly Butler, met first in person, while observing social-distancing guidelines, on April 21, then held follow-up conference calls on April 30 and May 4, according to an Alabama Department of Finance spokeswoman. The executive committee hasn’t met by phone or otherwise since May 4.

Daniels said members would hear updates from Harris, the state health officer, and Dr. Don Williamson, the president of the Alabama Hospital Association, and others. Ivey would also ask for any comments from other members, Daniels said.

He worries, however, that the state still isn’t doing what it can to mitigate the spread of the virus, which as of Wednesday has killed 1,489 people in Alabama. At least 36 percent of the deaths have been reported in July. The state’s COVID-19 daily hospitalizations hit another record on Monday, when Alabama’s supply of intensive care beds was also at its lowest point during the pandemic, and more coronavirus patients than ever were in those ICU beds.

Daniels pointed to an op-ed he wrote in late March that called for a stronger response to COVID-19 and laid out steps state leaders could take, but he said Tuesday that “I don’t know that we’ve focused on any of those things.”

In the op-ed, Daniels suggested the state expand Medicaid to help provide medical care to uninsured and low-income people, prepare to reopen some of the state’s 17 shuttered hospitals to care for COVID-19 patients and bolster the state’s supply of personal protective equipment, testing capacity and other needed supplies.

“The Governor’s Coronavirus Task Force that she established is one of the many avenues where she and our staff discuss the situation on hand, and it was particularly critical as we were in the beginning phases of this virus,” Maiola said in a message to APR on Monday. “Even in addition to meetings, information is shared.”

Maiola said after establishing the task force, and as Ivey and her office worked to “reopen the economy, she also established a select group of various individuals to serve on the Executive Committee.”

“Governor Ivey and our team receive daily updates from Dr. Harris and the Department of Public Health. The governor is also continuously receiving information from the hospitals, members of various industries, the White House and several other expert individuals and groups,” Maiola said.

Ivey also met in a closed-door meeting on July 15 with Dr. Deborah Birx, a key member of President Donald Trump’s coronavirus task force, along with the state health officer. After that meeting, the three joined in a roundtable discussion with 19 other physicians, state politicians, faith leaders and state and federal officials to discuss the state of COVID-19 in Alabama.

Press wasn’t allowed at the July 15 meeting or roundtable, and did not receive advance notice that Birx was coming to meet with Ivey and others, although Ivey’s office did issue a press release afterward stating that Birx believed it was a critical time for the South to slow the spread of the virus, and that Ivey’s decision to issue a statewide mask mandate was “brilliant.”

Daniels said he didn’t get an invitation to the meeting and was unaware Birx was coming to visit.

In subsequent visits to other states, Birx was made available for members of the press to ask questions.

In Tennessee on Monday, Birx held a press conference with Republican Gov. Bill Lee, in which she said that since that state was classified as being in the “red zone” in the White House Coronavrus Task Force’s weekly report “the number one bullet is mandate masks, close your bars, enhance social distancing.”

Birx made the same recommendation to close bars when she spoke in Virginia on July 28, telling reporters there that “it could really prevent Virginia from having the experience that our Southern states have had by starting mitigation efforts sooner rather than later.”

Alabama was, at the time of Birx’s meeting with Ivey, also classified in the White House Coronavirus Task Force’s weekly report as being in the “red zone,” according to The Center for Public Integrity, which published the document, which the White House had prepared but had not made public.

It was unclear Tuesday if Birx recommended that Alabama close its bars in the closed-door meeting with Ivey and Harris. A person who attended the roundtable discussion with Birx told APR they do not recall Birx making such a recommendation in that meeting, but that they’re uncertain if she made it when meeting privately with Ivey and Harris.

Asked if Birx recommended Alabama close its bars during her meetings with Ivey on July 15, the governor’s press secretary did not respond to the question in her reply to several questions.

The Alabama Department of Public Health, through a spokesman, declined to answer APR’s question as to whether Birx recommended to Harris and Ivey that the state close its bars.

Ryan Easterling, director of health media and communications at the Alabama Department of Public Health, in a response to APR on Thursday wrote that Harris and Ivey had a very productive meeting with Dr. Birx.

“She was terrific in answering technical questions with our laboratory and epidemiology staff,” Easterling said in his response, and then pointed the reporter to a two-paragraph press release on Birx’s visit.

Mac Gipson, the administrator of the Alabama Alcoholic Beverage Control Board, told board members at the start of a special meeting on Monday that Ivey’s office contacted the board last week — which would have been after her meeting with Birx — and said that one suggestion from Ivey’s advisers was to close bars, but that the board was tasked with coming up with a different solution.

Gipson said the original plan was to cut off alcohol sales at 10 p.m. and require all alcohol sold to be consumed by 10:30 p.m., but numerous business owners said the 10 p.m. cutoff was too early.

“I contacted the State Health Officer and he thought it should be 9 p.m. instead of 10 p.m.,” Gipson said. Instead, the board voted 3-0 on Monday to cut off alcohol sales at 11 p.m.

Ivey on Wednesday extended her “safer-at-home” order, which includes a statewide order to wear face masks. Included in the requirement are all school employees and students in grades 2 through college.