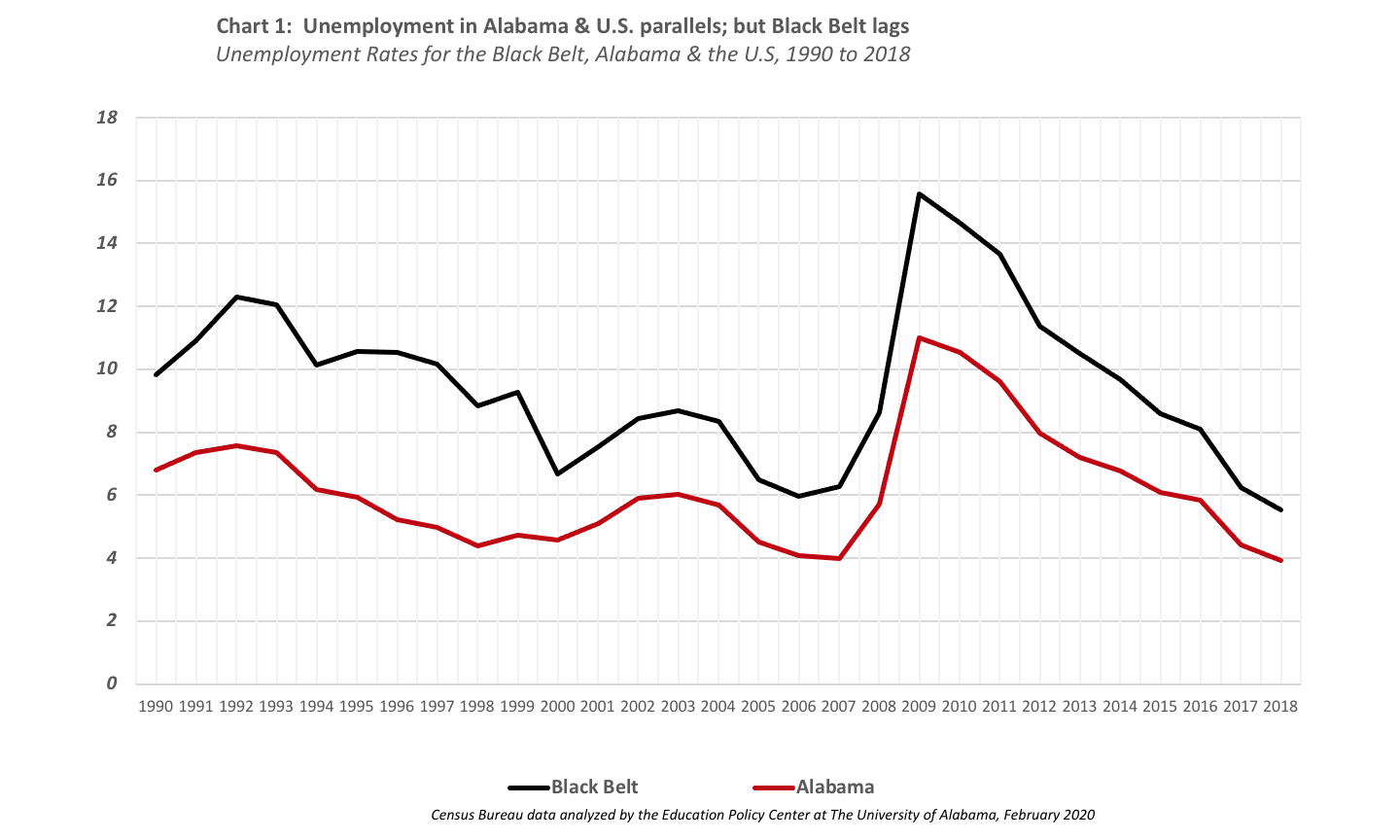 The unemployment rate in Alabama’s Black Belt region has been several points higher than the rest of the state for decades, and that trend has continued amid the COVID-19 pandemic, according to a report by the University of Alabama’s Education Policy Center.

“These figures suggest a long recovery ahead for Alabama’s Black Belt, a region that—despite significant growth—was behind the rest of the state going into the pandemic recession,” researchers noted in the report.

The report, titled “Persistent Unemployment in the Black Belt,” is the latest in the center’s eight-part series, “Black Belt 2020.”

Data from the Alabama Department of Public Health also shows that Black people living in the Black Belt region have been especially hard-hit by COVID-19, and statewide, Black people are also dying from the disease in greater numbers, a disproportionate impact seen in communities of color across the country. Black people in Alabama make up 25.7 percent of confirmed COVID-19 cases but account for nearly 40 percent of all coronavirus deaths in Alabama.

Gov. Kay Ivey recently awarded more than $1 million in grants to the Black Belt area to promote job growth, and that’s on top of $4 million in federal assistance to the area, said Stephen Katsinas, director of the university’s Education Policy Center, speaking to reporters during a briefing on Tuesday. 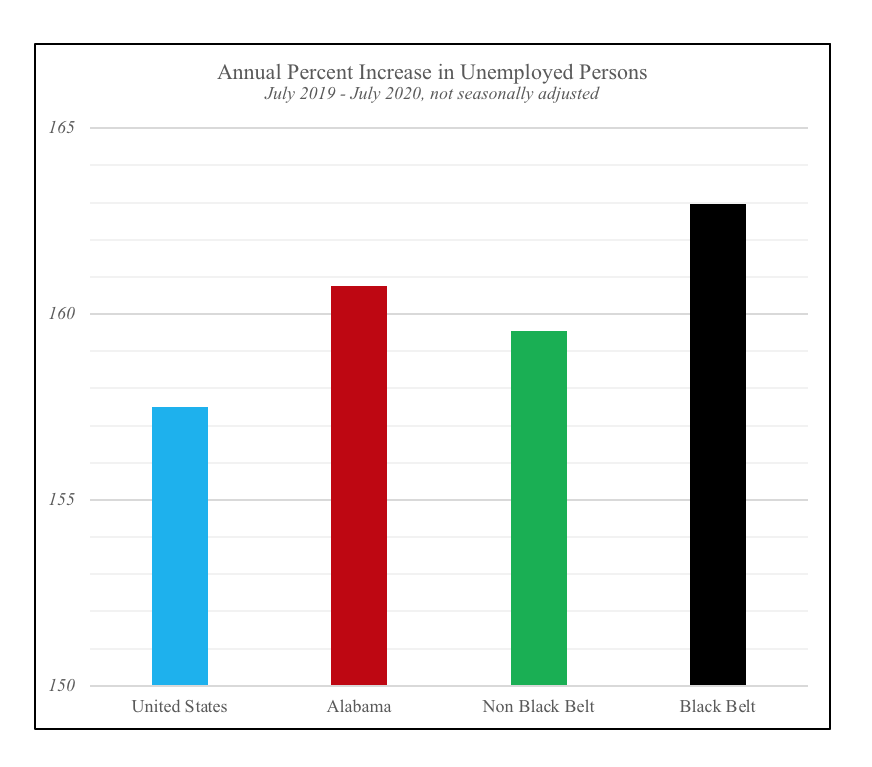 “The Black Belt Community Foundation is distributing 100,000 masks as well as tips and resources to combat COVID, and the West Alabama Food Bank has distributed 1.4 million pounds of food since mid-March, so the region is struggling, but they’re not taking it sitting down,” Katsinas said.

Katsinas also noted that recent data from August shows that areas of the country that have worse educational outcomes, where a larger portion of the population do not go on to attend college, are having more difficulty recovering and have higher job losses.

Sam Addy, associate dean of economic development outreach and senior research economist at The University of Alabama Center for Business and Economic Research, said during the briefing that educational attainment strongly correlates with unemployment rates.

“It also correlates with income, which is really important if we want to develop the Black Belt,” Addy said.

Thomasville Mayor Sheldon Day explained to reporters Tuesday that without access to broadband internet, communities in the Black Belt region are hamstrung on several fronts.

“Lack of access to broadband is exacerbating problems that were already here for generations,” Day said. “And it is causing the gap to get much wider.”

Without broadband, those communities can’t offer the kinds of educational opportunities and telemedicine that are so desperately needed to lift the area up, Day explained. The COVID-19 crisis has put a spotlight on the need for broadband in rural areas of the state, and especially in the Black Belt, Day said, where many students must now park near school buses equipped with WiFi to complete their schoolwork. Broadband access can also mean jobs, he said.

Addy stressed, however, that it’s important how broadband is framed and said it shouldn’t be looked at as simply a private industry.

“It’s clear that we make one fundamental mistake with broadband. We treat it as a private good, which it is not. It is more like electricity,” Addy said.

Greg Cochran, executive director of the Alabama League of Municipalities, speaking to reporters explained that educational attainment, healthcare infrastructure, job training and job development all intersect and must be addressed simultaneously. It will take collaborations on the federal, state and local levels to address the Black Belt’s needs, he explained.

The Education Policy Center released two previous reports in the “Black Belt 2020” series, which can be found on the center’s website and includes reports on declining school enrollment in the Black Belt and the area’s population decline and its relation to why the state could lose a Congressional seat in the 2020 census.

Online job ads in September up 18.7 percent from last year

The monthly total of online job ads for September 2022 is down 8.1 percent versus the previous month.