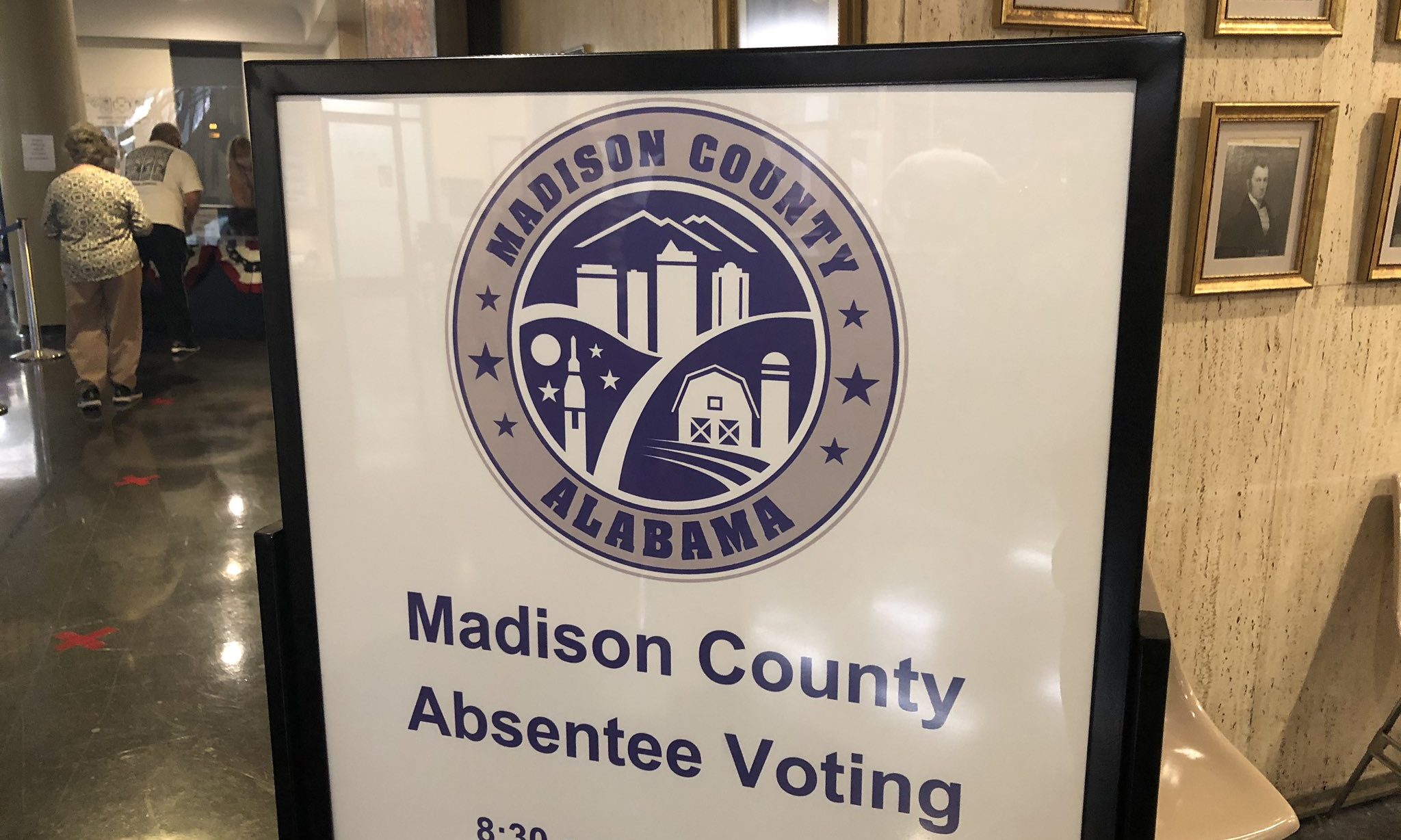 Hundreds of voters turned out across Alabama Wednesday to cast absentee ballots in-person, giving Alabamians a unique opportunity to be among the first Americans to vote in the 2020 presidential election.

Wednesday was the first day in which voters could vote by absentee a county offices and courthouses. In Mobile, phones rang constantly with voters inquiring about absentees. In Montgomery, by lunchtime, many voters received “I voted” stickers eight weeks before election day.

“At 8 a.m. this morning I had my first two voters, and we’ve been consistent since then. There’s been a steady flow. The word is out,” Montgomery County’s absentee voting manager told the Associated Press.

But later that same day, Judge Frank Barger addressed the concerns, assuring that the clerk’s office would be open for absentee ballots. Barer was present at the circuit clerk’s office the following morning, photographed with State Rep. Laura Hall, who cast her vote that morning.

The Absentee Ballot Office is up and running this morning. It was great to see Representative @annihall19 as one of the first voters. And Circuit Clerk Debra Kizer is working along with her clerks to deliver excellent service. #MadCoProbate #WorkingForYou pic.twitter.com/ytisMkDX29

In Mobile County, requests for absentee ballots came in at record pace as officials struggled to keep ahead of the flood, according to FOX10.

Amid the COVID-19 pandemic, the state loosened some absentee voting requirements, allowing anyone who has a fear or concern about spreading or contracting COVID-19 to use that as an excuse to vote absentee.

Democrats and voting rights activists, though, are still pushing the state to lift its ban on curbside voting and to ease witness and ID requirements for absentee ballots, saying those requirements put people at risk. They are also calling on the state to implement more universal early voting and mail voting.

“Today was a success and proves Alabama should implement statewide early voting, just as three of our neighboring states have,” said the chair of the Alabama Democratic Party, State Rep. Chris England. “In the meantime, we need to expand absentee in-person sites and hours to include nights and weekends to ensure that all voters have access to vote absentee in-person well ahead of Election Day. This will help keep Alabamians safe during this pandemic and make it easier for working folks to cast their ballots.”

Election officials predict that as many as 150,000 Alabamians could vote by absentee to avoid crowded in-person voting on election day come Nov. 3

Oct. 29 is the deadline to submit an absentee application, and completed ballots must be returned or postmarked no later than Nov. 2. With less than 50 days left to apply for a ballot, Alabama Secretary of State John Merrill is encouraging voters to go to their county absentee election office or fill out a form online and mail the request in.

Don’t wait. Make application for your absentee ballot today so your voice can be heard and your vote can be counted! #AlabamaVotes pic.twitter.com/r9Y6NwXtWh

Applying for a ballot early and returning it early could ease strain on elections officials and the U.S. Postal Service.

Anyone wishing to vote by absentee ballot may check the box on an absentee ballot request form that reads “I have a physical illness or infirmity which prevents my attendance at the polls. [ID REQUIRED].”