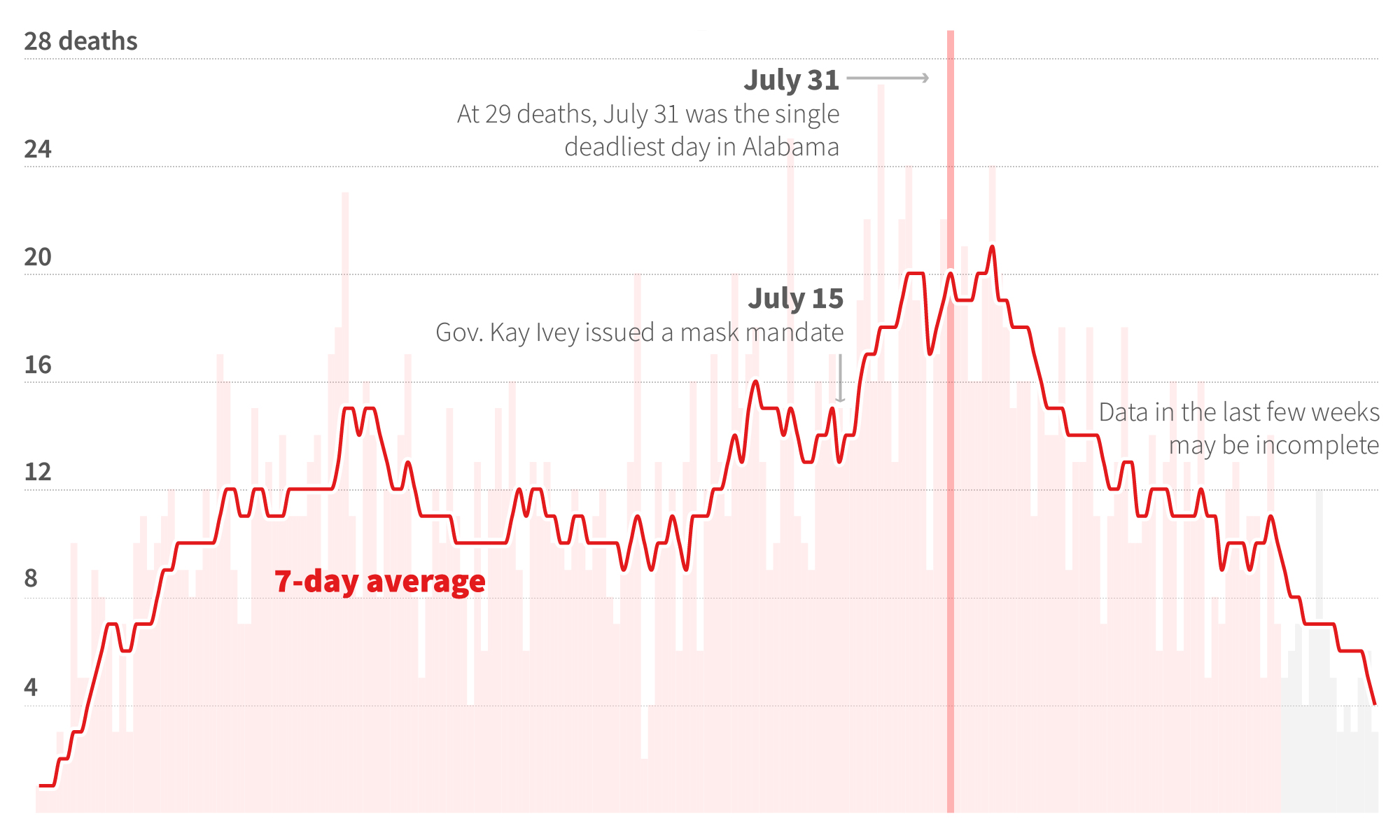 The Alabama Department of Public Health on Friday began releasing data that shows when a person in the state died from COVID-19, as opposed to the date the department confirmed the death, as had been the practice.

What the new data shows is that the state’s highest single-day of deaths was July 31, when 29 people died, which was almost two weeks to the day after Gov. Kay Ivey issued her initial statewide mask order.

Public health experts say it takes around two weeks after a change, such as a mask order, to begin noticing differences in new cases, hospitalizations and deaths. Deaths are an indicator that lags even further behind new cases and hospitalizations, however.

It takes the Alabama Department of Health some time to confirm that a death is the result of COVID-19. Workers must look over medical records and talk with family and medical staff to ensure the death is from COVID-19.

The new data released Friday gives a better glimpse at what was happening with the disease at a closer approximation of real time.

After that peak of new daily deaths on July 31, which was nearly two weeks after Ivey’s mask order, the number of Alabamians dying each day began dropping significantly.

At the time of the state’s July 31 peak in deaths, Alabama had a 14-day daily death average of 20 deaths. Two weeks later, the 14-day average had dropped to 17, and four weeks out it was down to 13 deaths a day — a 35 percent drop from the peak in July.

Two months after Ivey’s statewide mask order went into effect, Alabama’s 14-day average of daily coronavirus deaths was down to seven. On Friday, the average stood at six deaths; however, not all deaths that have occurred in the last two weeks may be included yet.


“On average, it usually takes a couple of weeks for deaths to appear in this chart,” the department noted.

The decline in daily deaths is mirrored by drops in the number of new daily cases and hospitalizations since Ivey’s mask order went into effect, although state health experts remain concerned that hospitalizations are still too high, as are the percent of COVID-19 tests that are positive.

“I’d hate to see us pull back too quickly and negate the progress that we’ve made in our daily positive numbers and our hospitalization rates by risking another spike due to a false sense of security, the upcoming winter months, the flu season and a host of other reasons,” Ivey said during a press conference Wednesday.

“This mask ordinance is working. It works, and we have evidence of that,” Harris said Wednesday.

Ivey’s amended “safer-at-home” order Wednesday was the second time she decided to keep the statewide mask order in place. She did so on Aug. 27 as well.