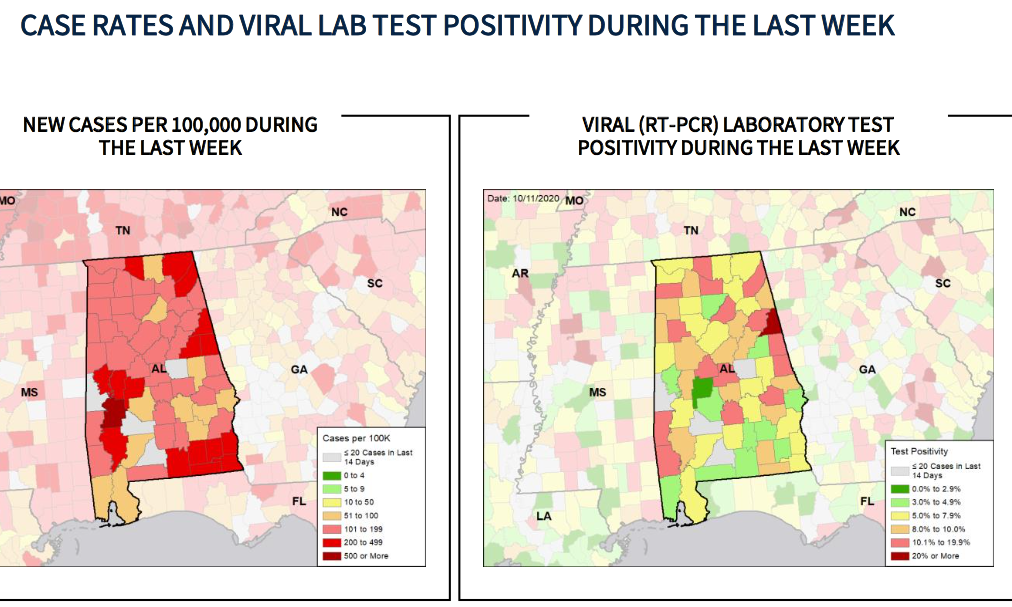 Alabama was a so-called “red zone” last week, and 79 percent of the state’s counties have moderate or high levels of community spread, according to the latest state report from the White House Coronavirus Task Force.

The state ranked 19th highest in the nation for the number of new coronavirus cases.

Alabama’s number of new cases last week rose by 14 percent from the previous week, while the number of tests performed statewide dropped by 11 percent, according to the report.

Dr. Karen Landers, assistant state health officer with the Alabama Department of Public Health, told APR by phone Friday that the drop in testing is due in part to a large number of tests that came into the system in batches during the previous weeks, which skewed the data.

The “data dumps,” as they’re often called, were from several new labs and other testing facilities that weren’t accustomed to reporting to ADPH, Landers said. There’s also been a decrease in the demand from the public asking to be tested, she said.

“In all of our counties we’ve had a decrease in demand, even in the public and the private sector, for testing,” Landers said.

Of the state’s 67 counties, at least 16 are listed in the report as being in the red zone last week, which is an increase of two counties from the previous week. Another 17 counties were listed in the yellow zone. The colored zones are based on the number of new cases within the previous three weeks. The Anniston-Oxford area, Decatur and Fort Payne were the only localities in the red zone last week, according to the report.

Alabama added 1,212 new COVID-19 cases on Friday, and over the last two weeks, the state’s case count grew by 13,676. Over the last week, the state has average 987 cases per day, a 14 percent increase from two weeks ago.

The percentage of tests that were positive statewide last week was 7.2 percent, according to the report, which was a slight .06 percentage point decrease from the previous week, but it’s still too high, Landers said.

Public health experts say the positivity rate needs to be at least 5 percent or there is continued community spread and cases are going undetected.

“I really won’t feel comfortable until we’re down to about 3 percent,” Landers said.

The Alabama Department of Public Health in the last three days reported an increase of 121 confirmed and probable deaths from COVID-19, which is the largest three-day count since the start of the pandemic. Landers said the recent uptick is due to a length of time it takes ADPH staff to confirm a death was due to COVID-19, and doesn’t reflect a recent rise in deaths statewide.

Hospitalizations of COVID-19 patients statewide reached a high of 862 on Wednesday and 859 on Friday, the highest the number has been since Sept. 4 when 863 people were hospitalized. Since Oct. 2, hospitalizations have increased some 16.8 percent.

“It’s looking a little bit like it’s going back up, because, and we have been seeing this, that people are becoming very tired of the message,” Landers said of hospitalizations.

“That’s just all we have,” Landers said.

The number of new cases, hospitalizations and deaths began dropping in the weeks after Gov. Kay Ivey’s statewide mask order went into effect in mid-July, but Landers said “we’re not there yet.”

Landers also worries that as we head into colder weather people will want to congregate with family and friends indoors, which could set off numerous outbreaks. The White House report notes that danger, and found that such practices continue to impact Alabama’s numbers.

“We continue to see community spread initiated by social friends and family gatherings,” the White House report states. “People must remember that seemingly uninfected family members and friends may be infected but asymptomatic. Exposure to asymptomatic cases can easily lead to spread as people unmask in private gatherings.”

Landers said it’s incorrect to think one isn’t in danger of catching COVID-19 when around family members over the holidays or in gatherings, and warned that asymptomatic carriers of COVID-19 are very much able to pass it to others.

Landers said many people seem to be acting as if their family members can’t spread the disease to them, but said “your family can.” As much as 40 percent of COVID-19 cases are among those who don’t have symptoms, Landers said.

“When you’re looking at that broad a level and range of asymptomatic transmission, then that is a significant concern to me,” Landers said.

Nationwide, COVID-19 isn’t showing signs of slowing. More than 30 states experienced growth in new cases over the last two weeks, according to data from Johns Hopkins.