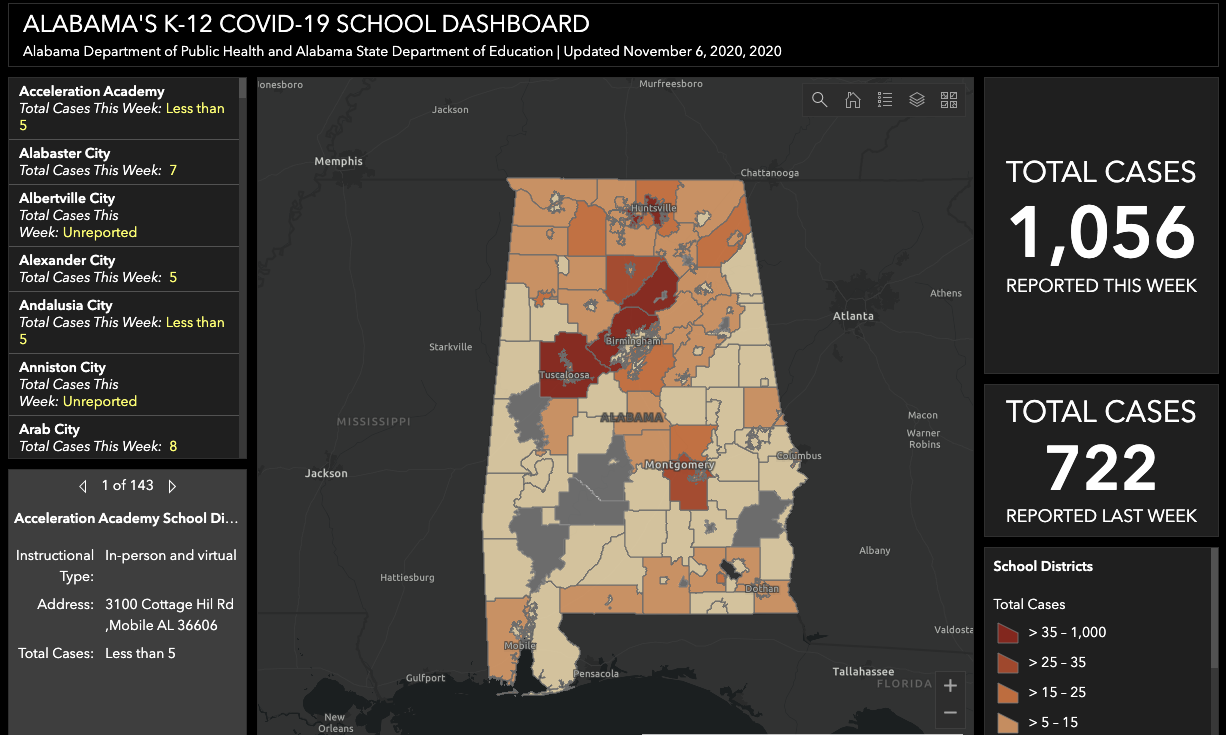 The number of reported COVID-19 cases among students and staff in Alabama’s K-12 public schools grew by 46 percent from last week, but that increase is likely due to many more districts reporting data than had done so previously.

The Alabama Department of Public Health and the Alabama State Department of Education’s K-12 COVID-19 dashboard updated Friday afternoon, showing 1,056 cases among students and staff statewide last week. That’s an increase from the 772 cases reported the previous week, which was the first week the dashboard went live.

Of Alabama’s 143 districts, 12 did not report any data last week, and 14 reported no new cases, according to the dashboard. During the week prior, 58 districts didn’t report into the system.

Michael Sibley, director of communications for ALSDE, told APR by phone Friday that the dashboard reflects only news cases reported that week, not cumulative cases, so the number may seem small for some individual districts.

Sibley said while school nurses are required by ALSDE to report new cases they learn of to the state for inclusion in the dashboard, parents are encouraged to report cases to their children’s schools but aren’t required to do so.

The dashboard notes that fact, and states: “If a student or employee fails to disclose to the LEA that they have a positive COVID-19 test or have been diagnosed with COVID-19, the LEA will have no way of knowing and communicating that information. Therefore, the information on this report includes only cases of which the LEA has been made aware.”

“And you have instances like last week, when we had Hurricane Zeta come through and a couple of days where schools were canceled,” Sibley said. “When those kinds of things happen, when school is not in session or in virtual cases, when people aren’t in physical school at all, you’re probably not going to get people reporting it to school nurses.”

Districts with larger case counts last week were located in Blount, Jefferson, Tuscaloosa and Madison counties, all counties that saw larger increases in new cases in the past week than less populated areas statewide.