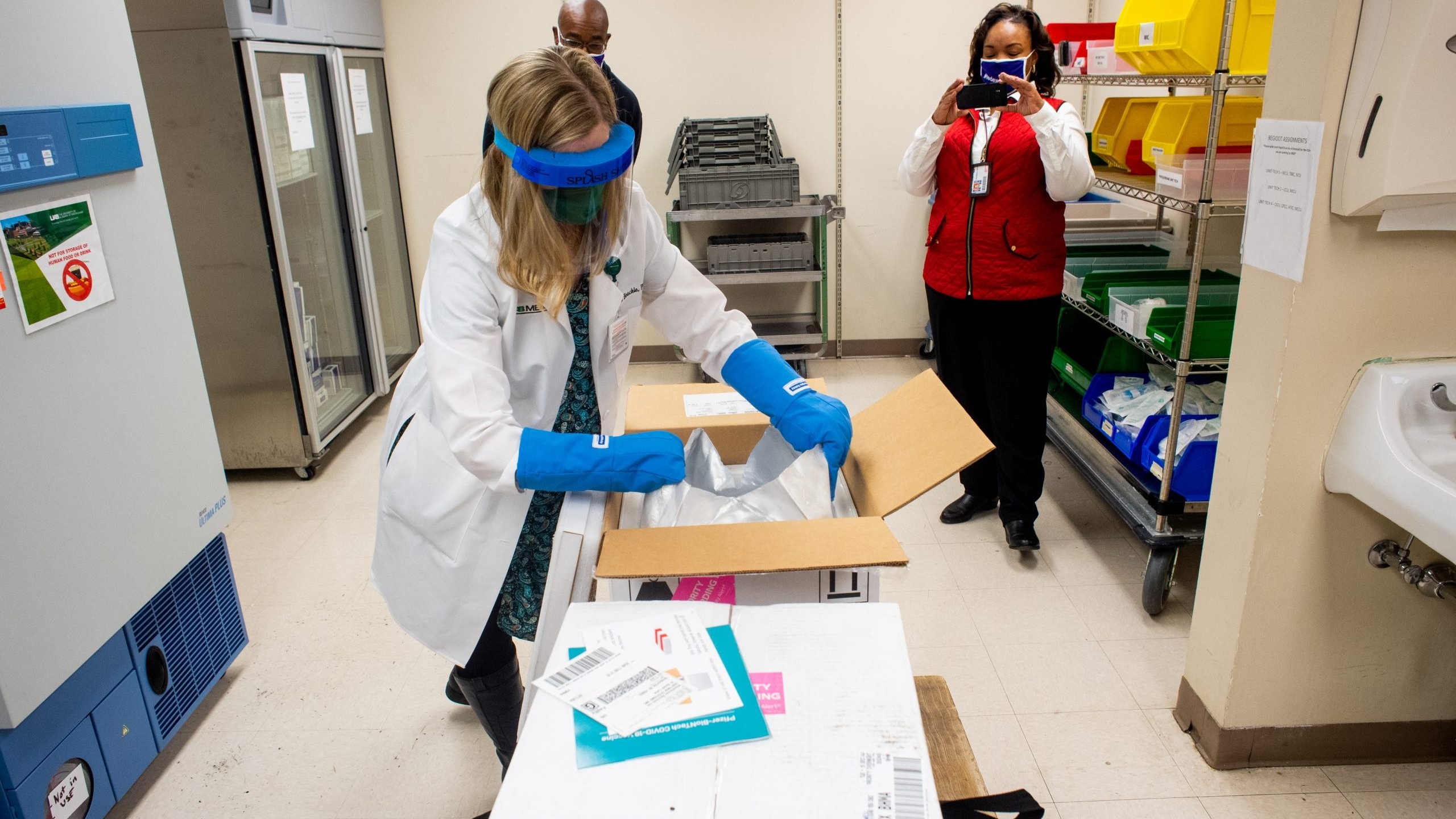 A UAB staff member opens a box of the first Pfizer vaccines for COVID-19 in Alabama. (VIA UAB)

Alabama hospitals awaiting second shipments of the Pfizer vaccine won’t be getting as much vaccine as they thought, the Alabama Department of Public Health confirmed to APR on Friday, but it was unclear by how much those next shipments will be cut.

“This will not affect persons who are receiving the Pfizer product for their first dose, as the second dose is already allocated. At the moment, ADPH is clarifying the number of doses of Pfizer COVID-19 vaccine that will be provided and will provide that number once we have further information,” Landers continued.

Alabama was to initially receive 40,950 doses this week, and shipments began arriving on Tuesday. Several hospitals began administering the vaccine to frontline medical workers this week. A reduction in second shipments would mean fewer of those at-risk workers would receive that first of two required shots next week.

Even after the first shot, the Pfizer vaccines provide some protection from COVID-19, Alabama Hospital Association president Dr. Don Williamson told APR on Thursday. That critical protection is important in Alabama because of drastic understaffing at numerous hospitals due to medical workers who have either contracted the disease or are under quarantine or caring for sick family members, Williamson said.

Alabama saw more new COVID-19 cases and more coronavirus patients hospitalized on Thursday than ever before, and the state’s availability of intensive care beds was lower on Wednesday than any point during the pandemic.

The Washington Post reported Thursday that officials in multiple states were told that second shipments of the COVID-19 vaccine had been drastically cut for the next week, prompting concern among state health departments as to whether President Donald Trump’s Operation Warp Speed could deliver enough doses to meet the 20 million target before the end of the year.

The newspaper reported that a senior administration official, speaking on the condition of anonymity, said the reduction was due to states that had asked for an expedited timeline for locking in their allocations for the following week, but that Pfizer seemed to contradict that in a statement.

“Pfizer is not having any production issues with our COVID-19 vaccine, and no shipments containing the vaccine are on hold or delayed,” Pfizer said in the statement Thursday.  “This week, we successfully shipped all 2.9 million doses that we were asked to ship by the U.S. Government to the locations specified by them. We have millions more doses sitting in our warehouse but, as of now, we have not received any shipment instructions for additional doses.”

.@CDCgov has informed us that WA’s vaccine allocation will be cut by 40 percent next week — and that all states are seeing similar cuts.

This is disruptive and frustrating. We need accurate, predictable numbers to plan and ensure on-the-ground success.

No explanation was given.

Health and Human Services Secretary Alex Azar in an appearance on CNBC on Thursday put the blame on Pfizer.

“Pfizer has got a different relationship with us. They’re part of Operation Warp Speed. We have a $2 billion commitment for the first hundred million doses, but they’ve kept things more arm’s length at their insistence throughout,” Azar told CNBC. “But we don’t have complete visibility into their manufacturing because they have kept that a bit more arm’s length.”

Asked if the federal government has secured another contract with Pfizer for additional vaccine, Azar said they’re working with Pfizer and are “optimistic” they can secure more vaccine from the company in the second quarter, and tried to focus instead on the Moderna vaccine, which hasn’t yet received final FDA approval.

“I do wish we would stop just talking about this Pfizer thing,” Azar said.