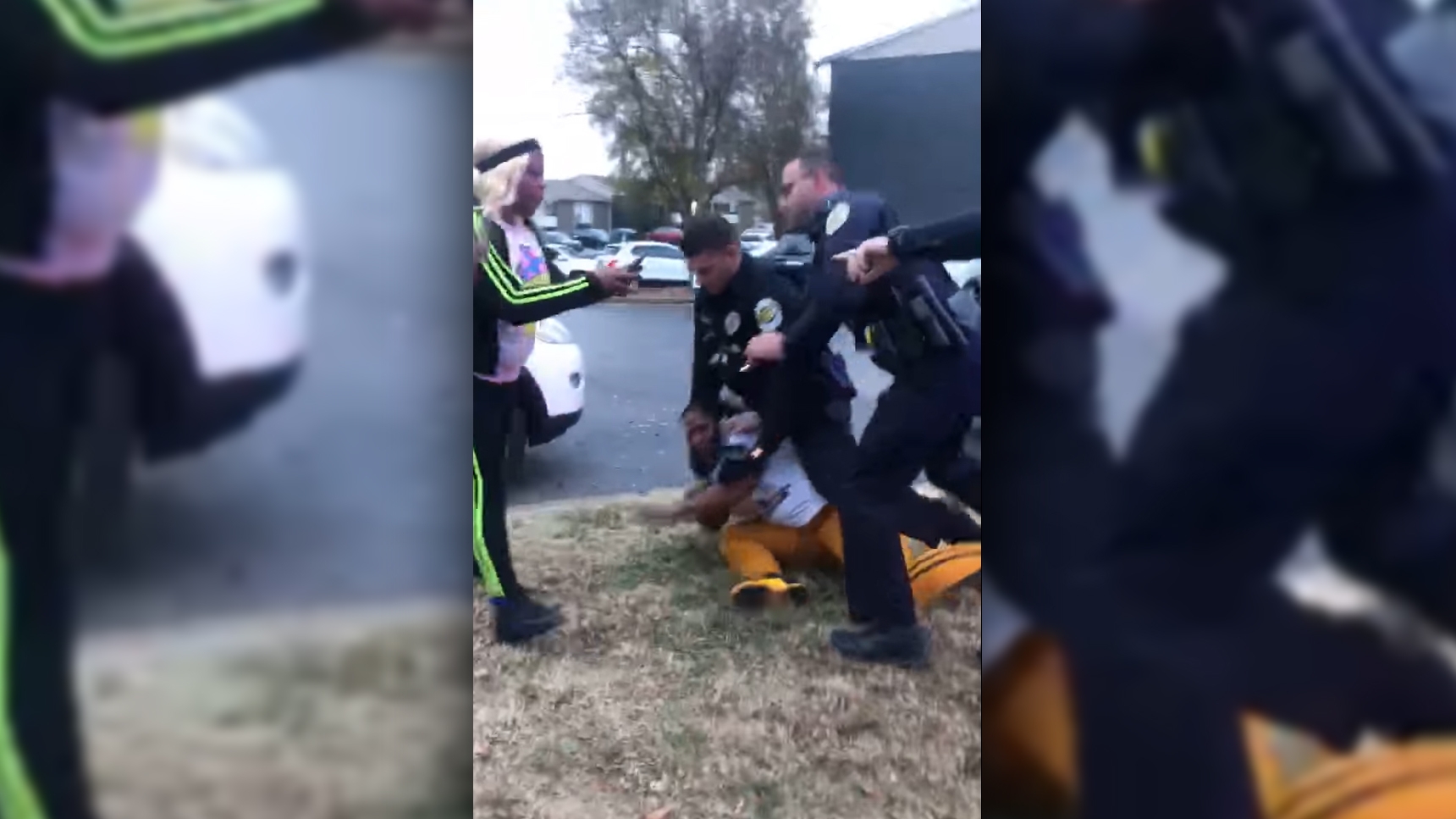 It has been almost a month since an altercation between Huntsville police and a local family was captured on video. A spokesman for the Huntsville Police Department said the incident would be investigated, but HPD has not provided further comment on what happened.

One of them, Charles Miller, agreed to evaluate the video of the incident in terms of his training to provide some insight into how a law enforcement agency assesses officer behavior. He is a retired member of the Florida Department of Law Enforcement, where his focus was officer certification and decertification. His work involved sitting in on decertification hearings.

“There’s a lot to unpack in this,” Miller said.

The incident began when police attempted to stop a car driven by 23-year-old Xavier Tate about two miles from his mother’s home, where he was headed. Following his mother’s instructions, which she gave him in light of much-publicized police killings of unarmed Black men, Tate kept driving until he reached the parking lot of her apartment complex.

That scenario can be interpreted by police as potentially dangerous because officers may think the car is heading to a place where its occupant can call others to get involved, Miller said. Had Tate done what his mother had also suggested and pulled over in front of a public place like a store, his failure to stop immediately might have seemed less threatening, but drivers heading for residential areas can cause officers to suspect that they’re planning to run into a home or get assistance from someone inside, Miller said.

“They’re going to question: ‘Is this guy moving us into a situation where we’re going to be confronted by others?’ And that’s what happened,” he said. “You know, there wasn’t a threat level, but the threat level could be very high in that situation.”

As Tate is handcuffed by one officer, his mother and aunt yell at another that he was only trying to stop where he felt safe. Miller said it is never wise for people to try and argue a traffic stop or arrest at the scene, but it is common.

He described the women’s behavior as “belligerent” but said it didn’t appear to be outside of what officers encounter on a regular basis. The second officer looked like he was doing his best to deescalate the situation and seemed to be successful, Miller said.

When the third officer arrives, he tells Tate’s aunt, Shanika Fletcher, 41, to back away from the vehicle. She responds that she can stand there. The officer grabs her arm and tackles her.

Miller noted that Fletcher didn’t immediately follow the command, but he added that the approaching officer didn’t give her time to. When he grabbed her she resisted a bit, Miller said, but he called that understandable.

“Being grabbed as she was rather than first there being a request for her to stand or kneel on the ground or do something else to indicate she wasn’t a threat — it didn’t appear she had that opportunity,” Miller said.

According to police training that he is familiar with, both women were standing too close to the second officer who had been speaking to them before the third arrived. That was an issue raised by bystander Dantraeon Calvert, 29, when he addressed the Huntsville City Council about the incident. Calvert said that the women were standing between 8 and 12 feet from the car and questioned what they were in violation of if police had not set up a perimeter.

That’s not what matters from a law enforcement perspective, Miller said. He wondered what the third officer heard on the call that brought him to the scene. A newly arrived officer can be expected to assess the situation for immediate threats, he said. A person’s demeanor, physical size, proximity to other officers and any objects they’re holding can all factor into an officer’s perception that a situation is unsafe.

Despite it appearing that the women were calming down and looking at their phones, even that can be interpreted as dangerous if an officer is worried that they may call others to the scene to confront police, Miller said.

“That’s what would be critical,” he said. “All I can say — it’d be interesting to see how this plays out and how it is disposed of. It’s a tough one.”

Another main complaint of bystanders was that the first officer didn’t ask any questions despite being fresh on the scene before he resorted to physical force. Once he did, the officer who had been deescalating the interaction joined in. Miller said that generally he isn’t aware of policies against an officer escalating an interaction when others are using a different approach, although it raises the question of what differences there were in rank and experience.

“It’s an aggressive move by the officer,” he said of the third officer.

Generally, when an officer becomes aggressive or escalates a situation, it sets the tone for the interaction even if other officers have been refraining from doing the same. That’s basic human psychology, Miller said. Departments don’t generally have policies prohibiting that and officers are allowed a great degree of discretion in how they respond in interactions with the public.

Calvert also took issue with what he felt was that officer’s provocation of him as Calvert yelled at police for getting physical with a woman. The officer tore a Velcro badge off his chest after Calvert insinuated that he was protected by it.

“I’d say that’s over the top,” Miller said. “I would think corrective action would be due there.”

At the heart of the issue, of course, is how police treat Black people. It was why Tate didn’t immediately pull over, according to his mother, and why his aunt reacted emotionally. If her behavior confirmed officers’ concerns about bystanders presenting a threat, their physical reaction confirmed what she was complaining about in the first place.

“If you talk about the context of how officers and particularly white officers are going to act in a predominantly Black area, I mean, you know — we’re back to discussing the whole thing of systemic racism, which is a cultural, society-wide problem that manifests itself pretty strongly in police,” Miller said.

It is difficult if not impossible to prove if a person’s race was a factor in an officer’s treatment of them. Departments can protect against this by having a system for identifying signs of racial insensitivity or bias.

Another piece of context he said would be important to consider is what prior experiences an officer has had in a neighborhood or location. He said that could have been a factor in how the third officer behaved.

“You don’t know what his history was there and whether it was warranted or not, but he certainly seems to have stepped up his machismo,” he said.

Huntsville Police Chief Mark McMurray has touted the department’s training requirements as going above and beyond recommended standards. Training has a lot to do with how incidents like this play out, Miller said, but it has its limits.

Life-threatening situations are common in law enforcement, but if a training program focuses too much on identifying potential threats, it can lead to officers overreacting, Miller said.

There’s also the cultural aspect of departments. Concepts involving restraint and respect for the public taught in police academies can be eroded by field training, where veteran officers might supersede those concepts with harsher ideas about the realities of police work. Miller mentioned the movie “Training Day,” in which Denzel Washington negates everything his probationary officer learned in the academy.

“That’s an extreme example, but things get undone. Riding in the car, doing training with a more senior officer, a lot of cultural things can get transmitted,” he said.

And while officers are trained extensively, members of the public who interact with them are not. There has to be a different level of expectation for residents, Miller said. It’s common for the average person to react emotionally and unwittingly do things that officers have been trained to recognize as potentially threatening.

A main thrust of CCJR’s reform goals is greater transparency by HPD regarding its procedures, officer screening practices and complaint review process. The department began making its written procedures accessible online last month, which CCJR activists had asked for. Knowing the guidelines that officers are trained to follow when interacting with the public can empower residents to do their part in keeping those interactions from going south and help them know when officers have violated policy, according to Angela Curry, CCJR’s founder.

Miller said that more public awareness of how to behave when dealing with police could go a long way in avoiding incidents like the one in question. Calling a local legislator, like Tate’s mother said she would do moments before her sister was tackled, is an appropriate response, Miller said — but better done at a safe distance from police.

As for transparency around complaints against officers, there does not seem to have been any movement. HPD has not responded to requests for its version of the incident or a timeline for the results of its investigation.