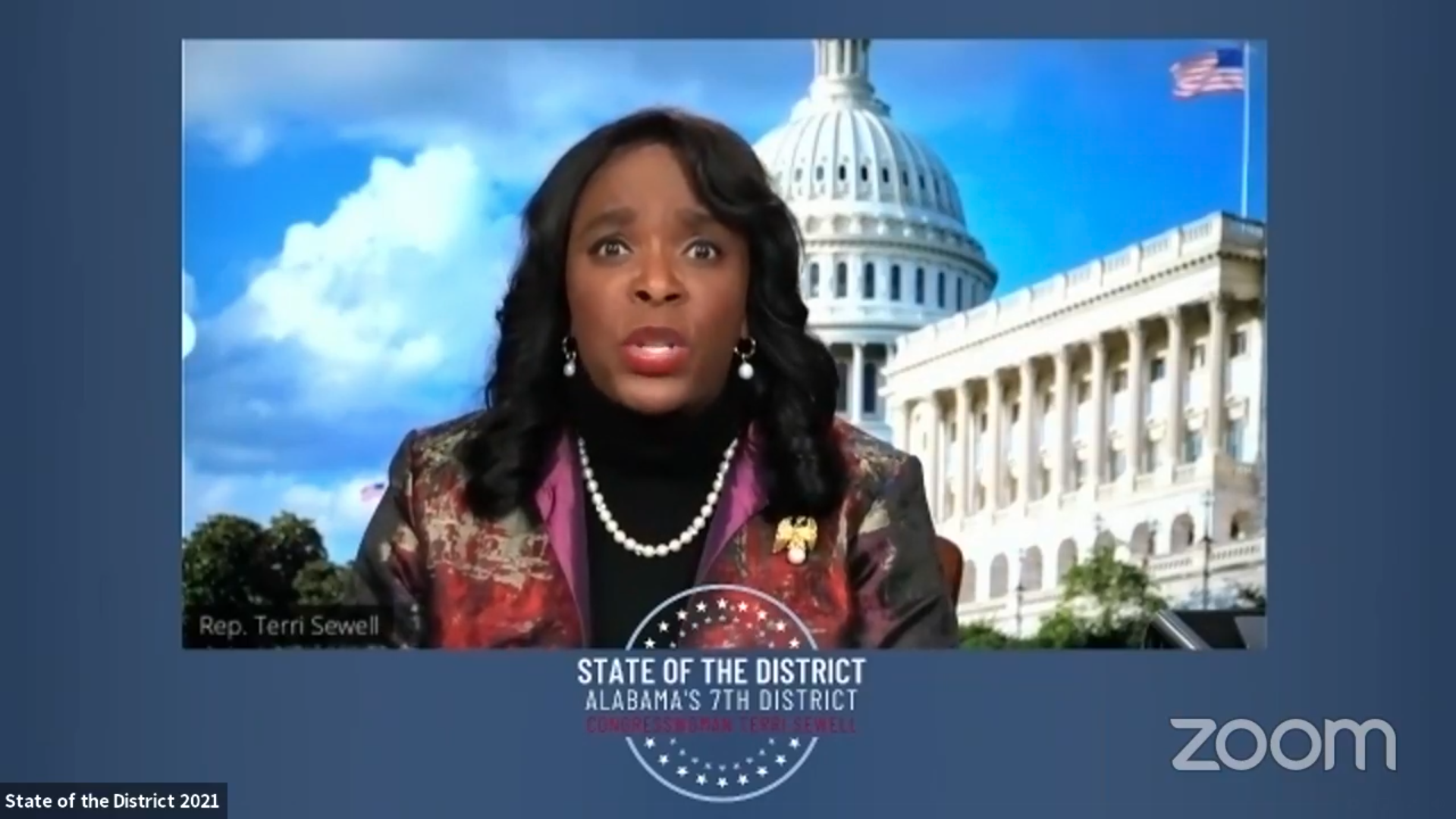 Alabama Democratic Congresswoman Terri Sewell on Thursday in her State of the District speech discussed the challenges that the COVID-19 pandemic presents to Alabamians, the work she’s done to help and what she’d like to see lawmakers get done in the coming months.

Sewell, who represents Alabama’s 7th Congressional District, said in her live-streamed speech that the COVID-19 pandemic has taken the lives of loved ones and resulted in an economic crisis that caused hundreds of thousands of Alabamians to lose their jobs and too many businesses to close their doors.

“In 2020, we secured over $1.6 billion in federal grants, and through our case work we recovered over $1.1 million in favorable benefits owed to our constituents from the federal government,” Sewell said. “Our commitment to you remains unwavering, especially in these very difficult times, as we build back better.”

“I know that these payments have not been sufficient, but now that we have a new administration, it is my hope that Congress will work together to provide additional cash payments to help families in need,” Sewell said.

The COVID-19 vaccines that have been approved are critical to ending the health crisis, Sewell said, noting that through the Tuskegee and other experiments, Black Americans have been medically exploited.

“I understand your concern about the vaccine, but the vaccine approval process has been transparent,” Sewell said. “And it’s important that we confront this deadly disease, and the vaccine will help us do that. … The science shows that COVID-19 vaccine is both safe and effective, and I believe it is the best way for us to crush this virus and get back to normal.”

Until a majority of Alabamians get vaccinated, it’s critical for the public to continue practicing social distancing and wearing masks, Sewell said.

Sewell also touched on the protests over the summer, in Alabama and across the country, over police brutality.

“Our nation experienced protests, a reckoning on police accountability and systemic racism, as well as the death of several civil rights icons, including my dear friend, colleague, and mentor, the beloved Congressman John Robert Lewis,” Sewell said. “Congressman Lewis’s fight for voting rights embodies the very heart and spirit of our district, and will inspire us to continue his fight to ensure that all Americans are able to make their voices heard at the ballot box.”

Sewell commented on the election of President Joe Biden and Vice President Kamala Harris, the first woman, the first Black American and the first South Asian-American to be elected to the office.

“While there were major threats to our democracy efforts to overturn the election, and even an insurrection at our nation’s Capitol, our democracy still proved strong, and our republic did witness a peaceful transfer of power,” Sewell said.

Sewell herself was forced to take shelter inside the U.S. Capitol when pro-Trump supporters broke into the building on Jan. 6.

“With the historic Senate races in Georgia, the South has helped to turn a new page in American history,” Sewell said, referring to the elections of Democratic Georgia Sens. Jon Ossoff and Raphael Warnock. “Democrats now control the House, the Senate and the White House. I am counting on President Biden to honor his commitment to restore the soul of this nation, and to be a president for all Americans, whether you voted for him or not.”

“I am also hopeful that we’ll be able to honor John’s legacy by fully restoring the full protections of the VRA and passing the John Robert Lewis Voting Rights Act into law,” Sewell said.

“The story of America has always been in search of a more perfect union. Our district embodies the triumph of faith, determination, and resilience in the face of despair,” Sewell said. “ We will get through this together.”

Sewell ended her speech by quoting comments made by the late Congressman John Lewis during his last visit to the Edmund Pettus Bridge in Selma on July 26 of last year.

“Never give up. Never give in. Keep the faith, and keep your eyes on the prize,” Sewell said.

A federal court clarified Wednesday that a previous deadline extension only applies to congressional candidates.