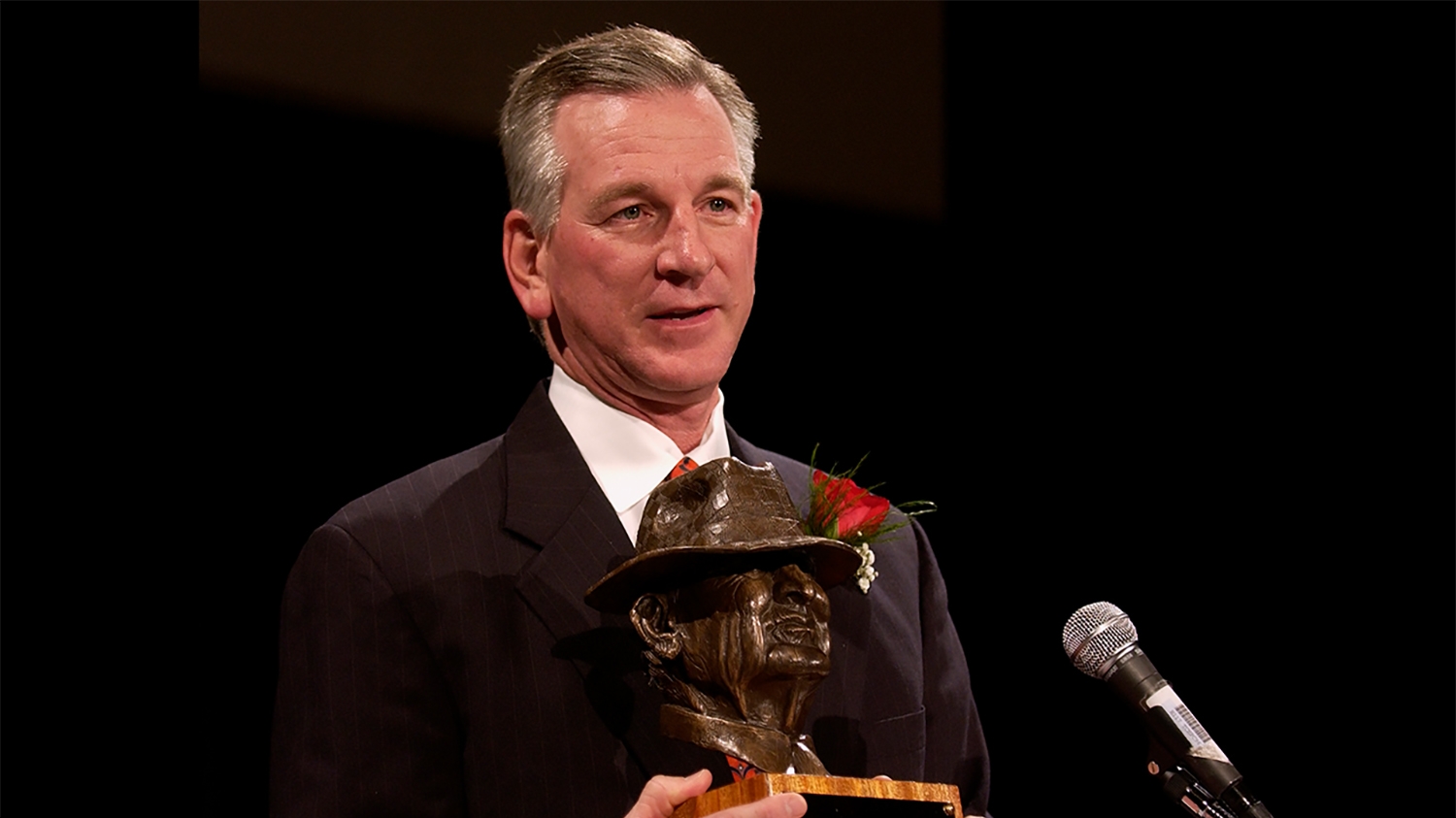 Alabama Senator Tommy Tuberville this week announced a number of appointments to his Alabama state staff as well as the locations of his Alabama offices.

The senator’s state team is made up of 14 individuals who are located across the state to serve as regional directors, caseworkers and subject matter experts on issues that are important to Alabamians.

“I want Alabamians to know that no matter where you live my state staff is close by and ready to assist with any questions, issues, or concerns facing the people of Alabama,” Tuberville said. “It was incredibly important to assemble a robust, knowledgeable team with strong Alabama roots, and I am confident the team constructed we have will serve the people of Alabama well. My team understands that the government works for the people, not the other way around. We’re here to help.”

Tuberville previously announced that Jordan Doufexis will be his senior adviser and state team coordinator. Doufexis leads and oversees the day-to-day operations of the senator’s state team.

Constituents with casework concerns should direct all calls to the Montgomery office at this time. Tuberville’s Montgomery office is at the Frank M Johnson Jr. Annex at One Church Street, Suite 500-B; Montgomery, AL 36104. The phone number is 334-523-7424.

Jordan Mills will serve as Tuberville’s Auburn regional director. Mills was born and raised in Montgomery. After high school, he received a scholarship to play baseball at Lurleen B. Wallace College in Andalusia. After finishing his career at LBW, Jordan attended Troy University at Montgomery. Jordan found a passion for entrepreneurship at the age of 21 when he helped started the first of three businesses. He now lives in Auburn with his wife Riki and their three children.

Cindy Pate will serve as Montgomery regional director. Pate is a native Alabamian with 14 years of experience serving as a state staffer for three previous members of the U.S. Congress. Most recently, she worked in Montgomery as a field representative for Congresswoman Martha Roby, R-Montgomery. Prior to her service with Roby, she served as a caseworker for Congressman Spencer Bachus, R-Vestavia, and as a caseworker and agricultural state representative for U.S. Sen. Jeff Sessions. Pate is a graduate of Samford University. She has two sons and a daughter-in-law.

Zandra Wilson will serve as Montgomery constituent services. Wilson is a native of Montgomery, where she attended Auburn University at Montgomery, obtaining a bachelor of science in psychology and a master of science in justice and public safety/judicial administration. As a veteran congressional constituent service representative and caseworker, she has served as a liaison monitoring federal, district and local agency matters for Sessions, Sen. Luther Strange Strange and Sen. Doug Jones, while advocating for the constituency within the Middle District of Alabama. Wilson has served as a U.S. Senate staff member for over 25 years. She has one son.

Tuberville’s Huntsville Office is at 2101 Clinton Ave W, Suite 300; Huntsville, AL 35805. The phone has not yet been announced.

Gwen Shelton will serve as Tuberville’s Huntsville regional director. Shelton has spent over 18 years in elected office, culminating as the first female mayor and economic development director of Fayetteville, Tennessee. Gwen and her husband Scott are the proud parents of active-duty Army aviator sons, Cpt. Nevada Shelton and 1st Lt. Cooper Shelton. A resident of Huntsville, she enjoys running marathons internationally, her favorite being The Great Wall Marathon in China.

Shanderla Dionne McMillian will serve as the Huntsville constituent services. McMillian is a native of Troy with 22 years of service as a staff member for three United States senators. A graduate from Auburn University at Montgomery, she has supported 17 counties in the northern Alabama region as a caseworker for Sessions, as field representative and caseworker for Strange, and as caseworker and service academy coordinator for Jones. McMillian currently lives in Madison County with her husband Louis C. McMullian Jr. and is the proud mom of two sons.

Ret. Col. Brian Naugher will serve as senior defense liaison. Naugher is a 34-year veteran of the Alabama National Guard with two deployments supporting the Global War on Terrorism. During his service, he held several command and key staff positions. His culminating assignments were the commander of the 226th Maneuver Enhancement Brigade/Joint task Force Tarpon and the support plans and operations officer for the 167th Theater Sustainment Command supporting Army North. In his civilian capacity he worked at Caelum Research Corporation as the assistant vice president of Department of Defense growth. He also held numerous positions while working in the healthcare information technology field during his tenure at The SSI Group. Naugher is a native of Opelika, Alabama, and currently resides in Guntersville.

Tuberville’s Hoover office will be in the Galleria Tower at 3000 River Chase, Suite 915; Hoover, AL 35244. The phone is yet to be announced.

Terri Connell will serve as the Hoover regional director. Connell is a native of Alabama with 36 years of experience in health care management and governmental affairs. A graduate of Auburn University, Terri is a member of various state and local boards, including Alabama’s Statewide Health Coordinating Council where she was appointed by Gov. Kay Ivey in 2017. Connell has served as the CEO of various healthcare entities and has extensive experience working with Alabama state legislators. She lives in Clanton with her husband John Wade Connell, son John Patrick Connell and daughter-in-law Courtney George Connell.

Deanna Frankowski will serve as the Hoover constituent services. Frankowski has been extensively involved in local, state and federal campaigns and conservative grassroots causes for 25 years. A resident of Alabama since 1985, she currently serves as secretary of the Jefferson County GOP Executive and Steering Committees and is active in various local organizations. Frankowski lives in Leeds with her three dogs Foster, Margi and Mandy. She enjoys outdoor activities, home improvement and is a member of St. Theresa Catholic Church.

Gil Hanahan will serve as the state healthcare liaison. Hanahan spearheaded the first graduate medical education program at East Alabama Medical Center in Opelika, Alabama. He received his bachelor’s degree with distinction from Auburn University in health services administration with a minor in business and also received his master’s of science degree in health administration from UAB.

John Ferguson will serve as Dothan regional director. Ferguson is a native of Dothan. Ferguson has been an elected member of the Dothan city commission since 2013, and is currently serving as the commission’s appointment to the Southeast Wiregrass Area Metropolitan Planning Organization. Ferguson is a graduate of Rehobeth High School and the University of Alabama, Birmingham’s School of Industrial Distribution. He is an active member of the Dothan community having served on the board of directors of the Southeast Alabama Child Advocacy Center; board of directors for the Wiregrass Auburn Club; and is a past member of the Dothan Planning Commission and the advisory board of the Dothan Technology Center. Ferguson and his wife Tina Grantham Ferguson have two children and are active members of the Ridgecrest Baptist Church.

Annette Stokes will serve as Mobile constituent services. A native of Mobile and graduate of South Alabama, Stokes joins Tuberville’s team after 17 years as a caseworker in Georgia for Sens. Saxby Chambliss and David Perdue.

Patty Etheridge will serve as state projects and grants coordinator. In this role, Etheridge will promote economic growth and community development efforts around the state. A resident of Foley for over a decade, Etheridge is an experienced campaign staffer, having served as Baldwin County Coordinator for Tuberville’s campaign.

Tuberville is serving in his first term representing Alabama in the U.S. Senate and is a member of the Senate Armed Services, Agriculture, Veterans’ Affairs, and HELP Committees.