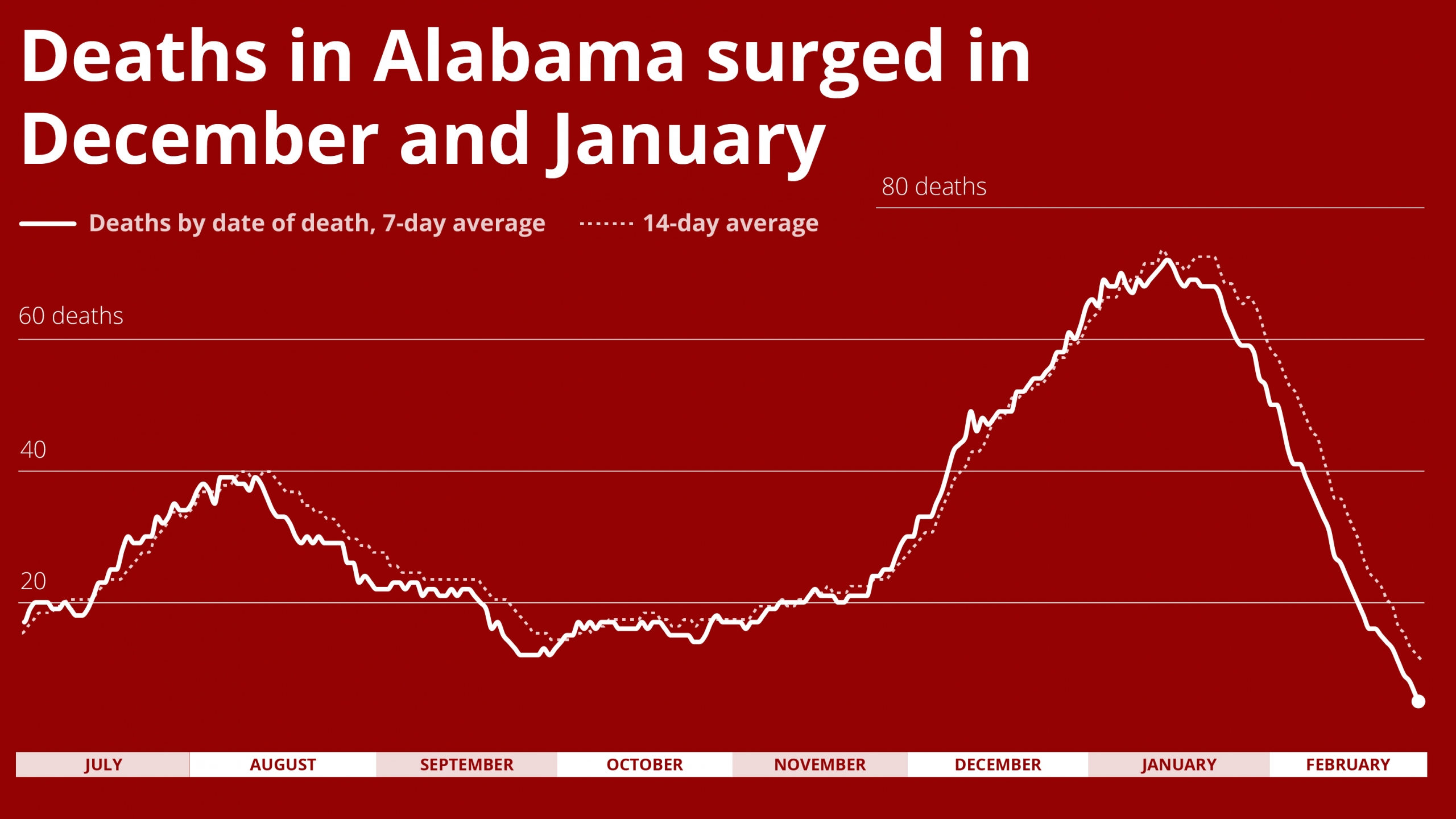 Alabama on Wednesday surpassed 10,000 COVID-19 deaths, a grim milestone as state and federal officials work to get as many people as possible vaccinated.

The Alabama Department of Public Health on Wednesday updated numbers to show 10,029 COVID-19 deaths — 7,872 confirmed and another 2,157 probable. Of those deaths, 49 percent were reported by ADPH within the last two months. Roughly 36 percent of the deaths — 3,577 people — occurred during the months of December and January, when the state suffered its worst surge of the virus.*Correction: This story previously stated that Alabama had the fourth-highest death rate per capita in the U.S. We mistakenly used outdated data. The story has been updated to remove that paragraph.

According to The Washington Post, Alabama has the ninth-highest death rate per capita in the U.S., behind Colorado, North Carolina, Massachusetts, Kentucky, Puerto Rico, Texas, Connecticut and Florida.

The state’s coronavirus death toll is just shy of the entire population of the Calhoun County community of Saks.

New cases in Alabama have been dropping since mid-January, and the state’s 14-day average of daily cases on Feb. 25 dropped below 1,000 for the first time since Oct. 19.

Hospitalizations statewide have been falling at around the same clip. As of Wednesday, the state had averaged 687 COVID-19 hospitalizations each day for the last week, lower than the seven-day average has been since June 29.

According to the ADPH, there have been at least 497,154 cases of COVID-19 in Alabama, although that number is surely an undercount because many cases go undetected.

As of Wednesday, there have been 944,795 doses of COVID-19 vaccines administered in Alabama, which was 76 percent of the state’s supply, with 316,059 people having been fully inoculated. While the Pfizer and Moderna vaccines require two doses, the newly approved Johnson & Johnson vaccine requires just one dose.

Alabama is to receive 40,100 doses of the Johnson & Johnson vaccine this week, according to ADPH, but it hadn’t arrived as of Wednesday, ADPH spokesman Ryan Easterling said in a message to APR.

Easterling said the Johnson & Johnson vaccine “will not be used to target a specific population” and will go through the department’s normal allocation process of identifying providers that are next in line to receive the vaccine.

“We think it’s premature,” said Dr. Philip Huang, the county’s health director, according to The Dallas Morning News. “It’s still too early. We’d all love to get back to normal. [But] it’s not the time to relax.”

“Now is not the time to relax restrictions,” Walensky said.

Gov. Kay Ivey is expected to address her safer-at-home order, which includes a statewide mask mandate, before it is set to expire on Friday.