The Alabama House’s Constitution, Campaigns and Elections Committee on Wednesday advanced a bill that would allow for more absentee voting locations and another that reduces the timeline to mail-in absentee voter applications.

Garrett said under existing law, in-person absentee ballots must be taken to county courthouses, and explained that during the pandemic the longer lines of people wishing to vote by absentee ballot in person was problematic.

“We had people that sat in line in the rain and cold for two or three hours to do this from all over Jefferson County,” Garrett said.

Rep. Chris Pringle, R-Mobile, spoke out against the bill and told Garrett: “I know what you’re doing. You’re just providing for early voting.”

Pringle also suggested that additional locations to accept absentee ballots could lead to “primaries that are going to be stolen using this.”

Committee members also approved a bill by Rep. Alan Baker, R-Brewton, that would reduce the timeline to mail-in absentee ballot applications from five days before an election to 10 days. The bill wouldn’t change current law, which states that absentee ballot applications are to be delivered in person up to five days before an election.

Baker said he thinks of the bill as “moving the target date” and that the change is needed to accommodate for slower postal service delivery times, to ensure absentee ballot applications are delivered and processed on time.

Baker’s bill comes as a rash of similar bills introduced by Republicans in Alabama and elsewhere seek to restrict early and absentee voting.

Alabama House Democrats in a Tuesday evening House session expressed concern over another bill by Rep. Chris Blackshear, R-Phenix City, that would have made it a Class C felony to vote in an election in Alabama and vote again in the same election in another state. Blackshear said six people did as much in 2016, although it’s unclear whether they did so intentionally because those cases haven’t been investigated.

Blackshear said the bill’s intention was to be proactive, and that even one instance of voter fraud was one too many. He said 11 other states have similar laws.

Rep. Chris England, D-Tuscaloosa, said he’s got some things he’d like to be proactive about, as well.

“If Donald Trump had have won the election we wouldn’t be talking about these bills,” England said of the many election bills brought by Republicans. “We wouldn’t even be having these conversations, and that in and of itself kind of bothers a lot of people.”

England asked for an amendment to lower the penalty in Blackshear’s bill from a Class C felony, which could result in a 10-year sentence and count toward a possible habitual offender offense, with much stiffer sentences,  to a Class A misdemeanor.

Blackshear pushed back against that recommendation but eventually agreed to allow a vote on England’s amendment, which was approved, as was Blackshear’s bill. 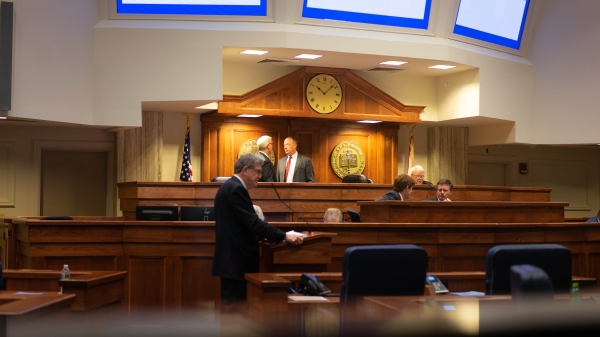