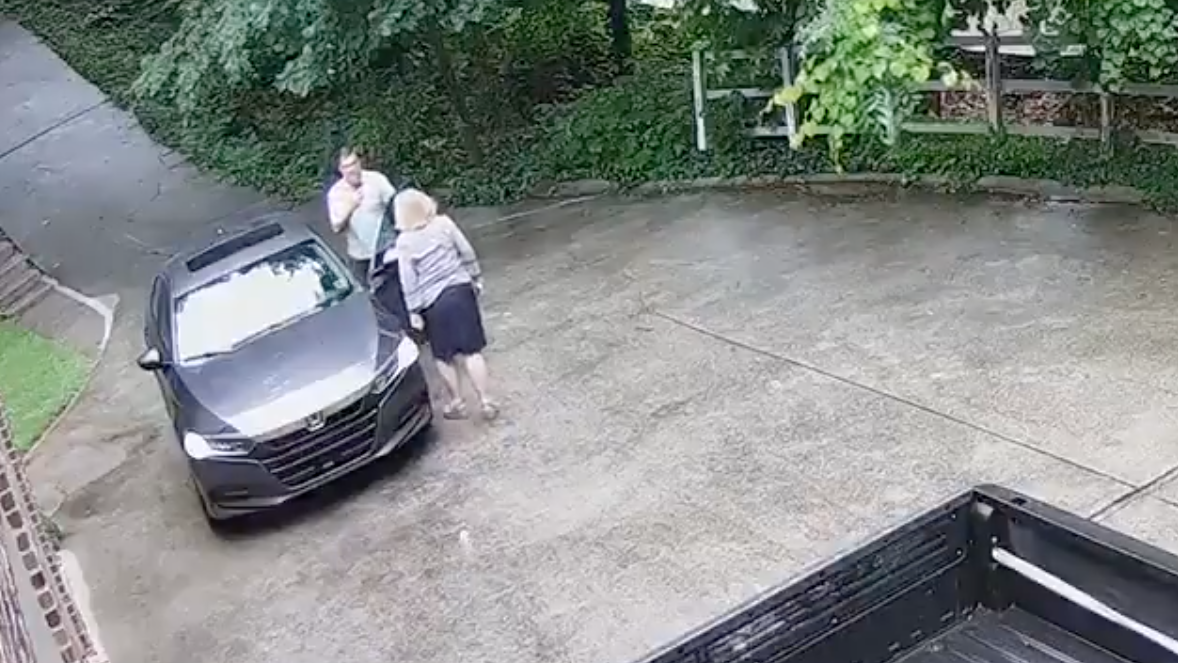 Martha Brooks is seen on home security footage on Sunday confronting an investigator who served her with a lawsuit against her husband.

A campaign email from Congressman Mo Brooks, R-Alabama, on Wednesday used his wife’s experience getting served with a lawsuit meant for him to solicit donations from supporters.

“THEY CAME AFTER MY WIFE” was the email’s subject line. It accused the legal team of Rep. Eric Swalwell, D-California, who named Brooks in a lawsuit over the Jan. 6 Capitol siege, of trespassing on Brooks’ property and harassing his wife, Martha.

“Swalwell’s ridiculous attorney, Philip Andonian, has denied that a crime was committed, but if that’s the case, why hasn’t he released the video made by his agent?! It’s because his team and the Fake News Media are straight up lying,” the email stated.

The process server was a private investigator hired by Swalwell’s legal team after they said they were unable to locate Brooks for several months to serve him with the lawsuit, which was filed in March. The investigator, Christian Seklecki, can be seen on the Brooks’s exterior home security footage racing up the driveway after Martha Brooks pulls into the garage. She was returning from church, her husband said.

In a sworn affidavit filed Tuesday, Seklecki said he followed Martha’s Toyota Highlander SUV into the garage and handed her the paperwork when she opened her door. She threatened to call the police, he said, and followed him to his car, which he said she briefly blocked from reversing out of the driveway, “ostensibly to note my license plate.”

The campaign email said that once the “low life” has been properly identified, Brooks would pursue charges.

“These Radical Socialists get away with so much… But committing a crime by unlawfully trespassing on my property and then accosting my wife is crossing the line!

“Martha was terrified when she looked up and saw this crazed man, two feet from her with a camera in her face,” the email said.

Brooks told Fox News’ Laura Ingraham that Swalwell could have served him “roughly 100 different times” along his route between the Capitol and his House office building.

“This is a frivolous, politically motivated lawsuit,” he said. “There is no liability on the part of myself or President Trump, although I proudly stand with President Trump as we defend this frivolous litigation.”

The suit accuses Trump, his son Donald Trump, Jr., his attorney Rudy Giuliani and Brooks of inciting the attack on the Capitol with their speeches to the crowd beforehand.

Brooks is running for the Senate seat being vacated by Sen. Richard Shelby, R-AL, who is retiring next year.

The email ended with a link to an online donation page that features a large photo of Swalwell and the Brooks home security recording.

“The Radical Left can’t take me down so now they’re coming after my wife!” it said. “Help us fight back against Eric Swalwell and the UNHINGED DEMOCRATS!”