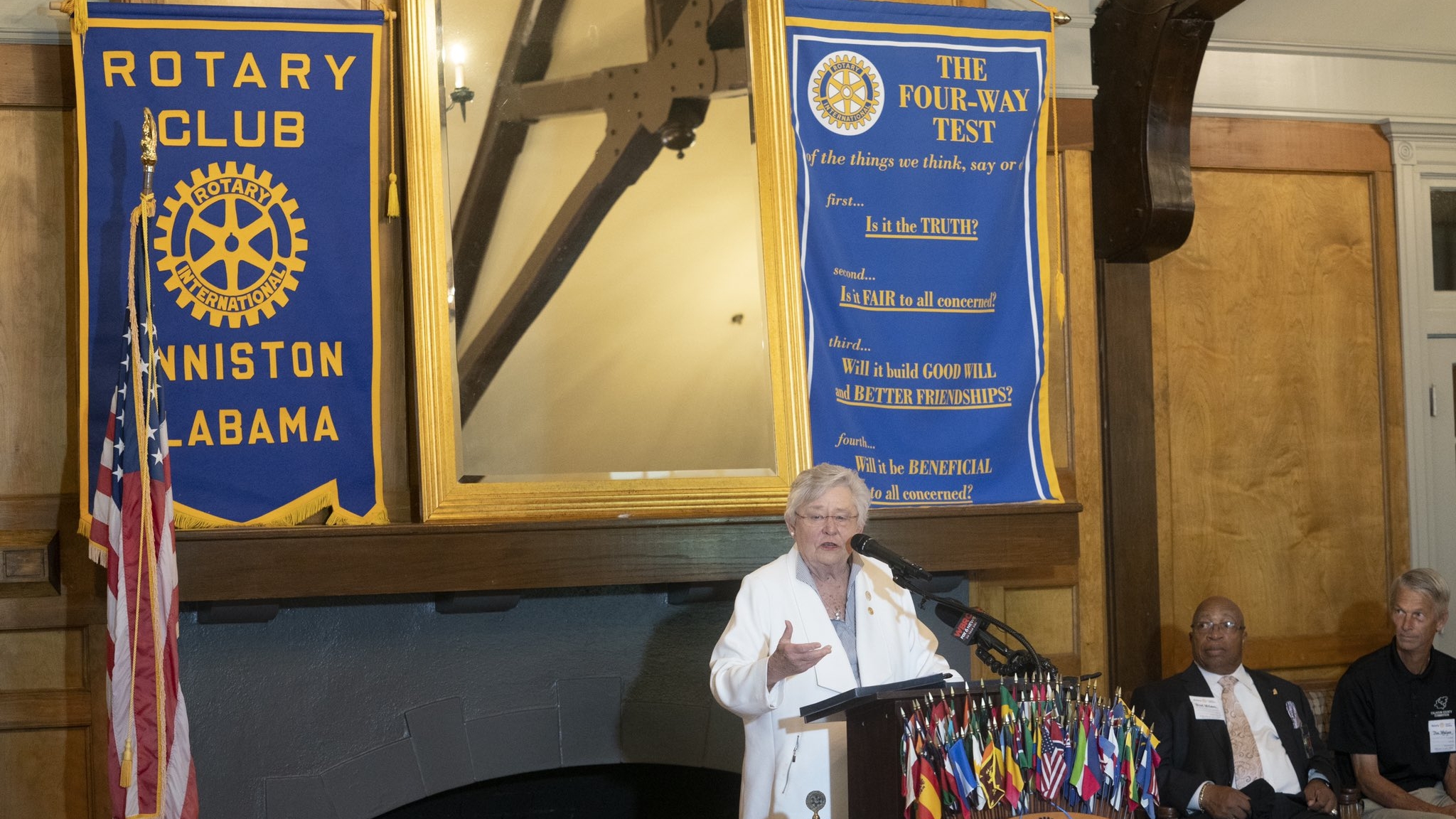 Gov. Kay Ivey speaking to the Rotary Club of Anniston on Tuesday.

Gov. Kay Ivey, during a stop in Anniston on Tuesday, spoke of the state’s prison crisis, the Legislature’s grappling with gambling and a state lottery, and her decision to end federally-funded pandemic unemployment aid.

Speaking to the Rotary Club of Anniston at the Anniston Country Club, Ivey explained that her plan to lease new prisons from a private prison company has failed, and it’s now up to the state Legislature to help find another way to build new facilities.

Ivey’s plan had been estimated to cost more than $3 billion, and the state wouldn’t have owned the prisons at the end of those lease terms.

Ivey said the state’s infrastructure is outdated and “it is failing to get the job done for quite some time.”

“Over the course of the last few weeks I was disappointed to learn that my plan to lease three facilities was no longer an option due to the lack of financing,” Ivey said.

The private prison company CoreCivic had until June 1 to secure financing to build two of Ivey’s three planned prisons, but after public pressure on banks and financial institutions against doing business with CoreCivic, and a general uneasiness among investors to spend on new prisons, CoreCivic failed to close the deal.

“This is an unfortunate reality, but it’s still every bit as imperative that we address these issues like overcrowding, inmate-on-inmate violence and work to reduce recidivism and truly rehabilitate prisoners in Alabama,” Ivey said.

“I’m actively working with legislative leaders to look for new ways to build these facilities and get Alabama back on track,” Ivey said. “Folks, if we fail to solve this issue the Department of Justice will step in and take over, which is something the state cannot afford.”

“We have the lowest unemployment rate in the Southeast, well below the national average,” Ivey said “Our wages are on the rise. Anybody who wants a good-paying job can surely have one. Because of this we suspended the pandemic unemployment assistance program…It’s time to get back to work.”

Ivey on May 10 announced the state would end all federally funded pandemic unemployment compensation programs on June 19, citing complaints from business owners who say they are having difficulty filling job openings.

Average weekly earnings for business rose to $968 in April, an increase of more than $67 over last year’s earnings, according to the Alabama Department of Labor.

Dev Wakeley, a policy analyst at Alabama Arise, told APR in May that the state’s decision to stop participating in the federal aid programs is expected to remove $6.2 million a week from Alabamians’ pockets.

Daniel Alpert, a senior fellow in macroeconomics and finance at Cornell Law School, in an editorial in The New York Times wrote that shutting off those federal funds means the economy at large could experience one of two adverse outcomes.

“Either there won’t be enough jobs for the people eventually looking for work because so many businesses closed during the pandemic, or the jobs left over will be, frankly, lousier jobs,” Alpert wrote. “This latter possibility would leave a large share of Americans underemployed, which would cause a wide reduction in household income among the country’s less wealthy half.”

Alpert continued that the majority of jobs that aren’t back to pre-pandemic work force levels are “very low-income jobs” and that 23 million of those jobs paid salaries of $26,000 a year.

“But unfortunately they were just unable to pass a bill that worked for both sides of the aisle this session,” Ivey said, adding that her administration remains committed to addressing the issue.

Ivey could call for special sessions this summer to address gaming, prisons and how the state is to spend federal pandemic aid.