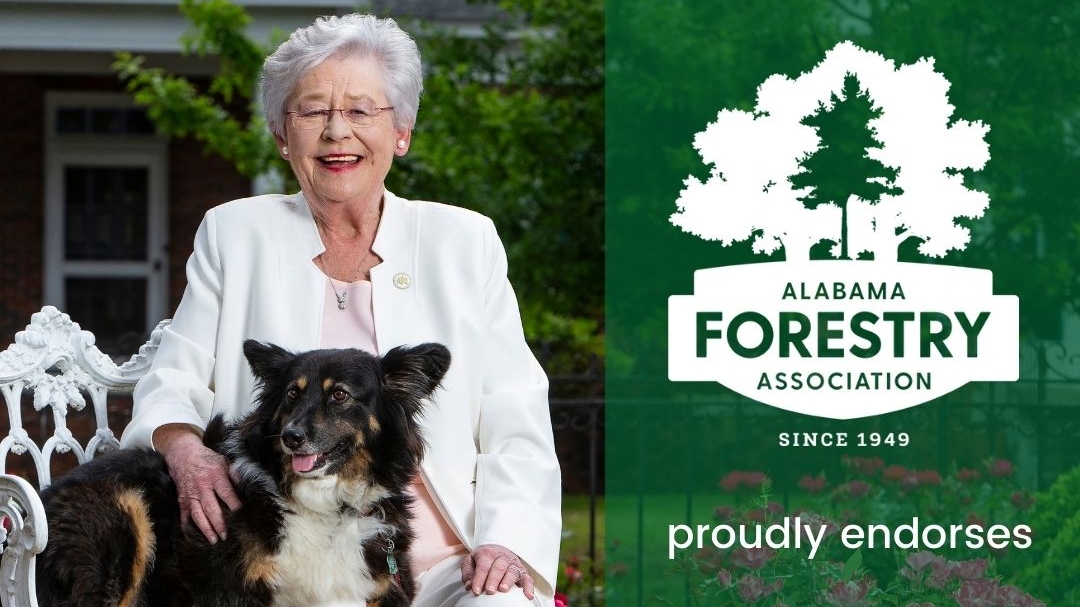 The Alabama Forestry Association announced Tuesday its endorsement of Gov. Kay Ivey for a second term as governor of the state.

“Governor Ivey has done an outstanding job since taking office,” said AFA President Chris Isaacson. “She is a champion for Alabama’s forest products industry and played an integral role to ensure our industry continued to operate during the pandemic and supply essential products for consumers.”

“Kay is an advocate for a smaller, more efficient state government and fully understands the importance that forestry brings to the economy of Alabama,” Isaacson said. “We are honored to stand with Governor Ivey in her bid for a second full term.”

Ivey says that she has generational ties to the forest products industry and understands and appreciates the interests of timberland owners and is a strong supporter of private property rights.

“Alabama’s abundance of natural resources is part of what makes this state such a special place to live,” Ivey said. “The forestry industry, no doubt, is a major component of that. For much of my life, this industry has been personal to me and so many other Alabamians.”

“During my career, I have been very involved in the work of the Alabama Forestry Association, which is why I am so honored to receive their support,” Ivey said. “I look forward to continue partnering with them in my second term to make Alabama a good place to live, work and raise a family. Truly, the best is yet to come.”

Ivey grew up on a cattle farm in Wilcox County, has a degree from Auburn University and is a former educator. She previously worked in Montgomery for then-Speaker of the House Joe McCorquodale. Ivey was elected state treasurer in 2002 and re-elected in 2006. In 2010, Ivey defeated incumbent Lt. Governor Jim Folsom Jr. and was re-elected in 2014. Ivey was elevated to governor in 2017 when Gov. Robert Bentley resigned. Ivey was elected governor in her own right in 2018.

Ivey faces competition in her bid for re-election. Lee County Pastor Dean Odle is already running against her in the Republican primary. State Auditor Jim Zeigler has formed an exploratory committee to consider running for governor. Wiregrass marriage equality activist Chris Countryman is running as a Democrat for governor.

The Alabama Forestry Association is one of the largest state forestry associations in the country with a membership that includes forest products manufacturers, landowners, loggers, wood dealers, foresters, consultants and others involved in forestry. AFA is dedicated to protecting and improving the business, regulatory and legal environment for landowners and forest business owners to ensure profitable and sustainable operations.