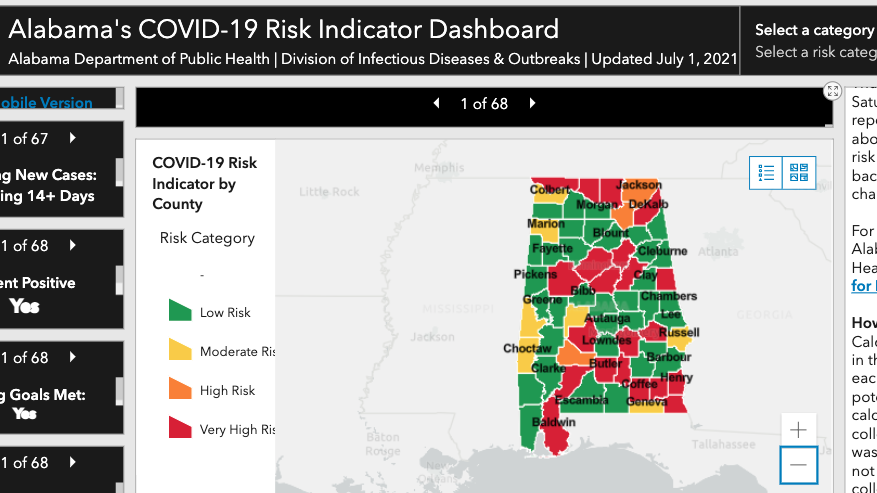 From The Alabama Department of Public Health

After reaching a post-winter surge low of 166 COVID-19 hospitalizations on June 20, the number of Alabamians being treated for coronavirus in hospitals hit 213 on Independence Day.

The uptick in hospitalizations comes as the number of counties deemed by the Alabama Department of Public Health to be a “very high risk” for the spread of COVID-19 on Thursday jumped to 21, up from six counties the week before.

The increase in hospitalizations is nowhere near Alabama’s peak of 3,070 COVID-19 hospitalizations on Jan. 12, but the increase is concerning nonetheless because of the state’s abysmal vaccination rate and public health experts’ warnings about the more contagious delta variant that’s quickly becoming the dominant strain in the U.S. and many other countries.

Alabama has the second-lowest percentage of vaccinated residents in the nation, at 32 percent, according to The New York Times.

There’s a partisan divide when it comes to vaccinations as well, according to results of a poll released Sunday and conducted by The Washington Post and ABC News, which found that 86 percent of Democrats had received at least one dose while just 45 percent of Republicans had.

Fauci said that of the nearly 10,000 COVID-19 deaths in June in the U.S., approximately 99.2 percent, were among the unvaccinated.