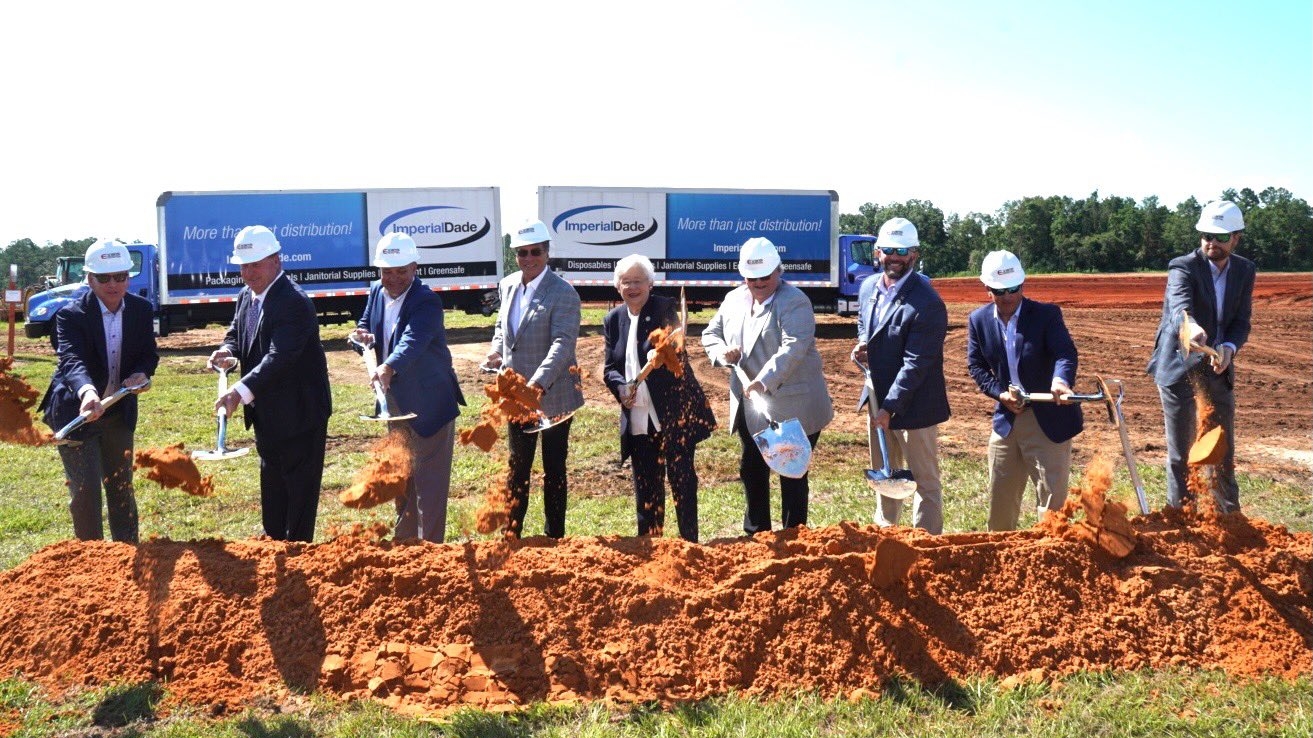 Gov. Kay Ivey attends a groundbreaking for a distribution center in Baldwin County.

Governor Kay Ivey on Tuesday joined Imperial Dade for a groundbreaking ceremony for their new logistics hub in Baldwin County. This $20 million investment is expected to create 55 new jobs in fast-growing Baldwin County.

“Imperial Dade’s expansion proves what we already knew – job growth is on the rise on the Alabama Gulf Coast,” Ivey said. “Today’s expansion news means 55 new, good-paying jobs for Alabama families as well as an invaluable investment in our state and local economies.”

“Because of investments like this, we will continue to be the leader of the southeast in offering first-class opportunities to the citizens of our state and making sure that anyone who wants a job can find one,” Ivey added.

“Loxley is very pleased with the amount of growth we have seen recently,” said Loxley Mayor Richard Teal. “Along with new development, we are also seeing existing companies like Imperial Dade continue to grow and thrive. It is exciting to see Imperial Dade expand their business as well as bring new job opportunities for our citizens.”

“Loxley is the ideal location for our new logistics hub, which will allow us to expand our operations in this very important region,” said Imperial Dade CEO Robert Tillis.

Economic developer Nicole Jones said: “Distribution and Logistics are some of Alabama’s Foundational Business Targets, meaning these types of businesses intrinsically provide core competencies for a variety of industries. Imperial Dade, an independently-owned and operated distributor of food service packaging and janitorial supplies, has a growing footprint in the Gulf Coast region. Because of the close proximity to interstates and the Port of Mobile, a larger Class A facility for the logistics hub in Loxley, Alabama (Baldwin County) will allow Imperial Dade to meet consumer needs while benefiting the state and local economy.”

Imperial Dade is a leading independently owned and operated distributor of foodservice packaging and janitorial supplies.

The 220,000- square-foot building will support the company’s expanding customer base and continued growth along the Gulf Coast.

The new logistics hub is being developed and owned by I-10 Gulf Coast Logistics Center LLC. It will be the first Class-A industrial facility constructed in Baldwin County. Imperial Dade is making the move from an existing Loxley location. In close proximity to Interstate 10, the location provides easy access to the entire Gulf Coast market, including the nearby Port of Mobile.

The center is located just south of the new 564,000-square-foot ALDI regional headquarters and distribution center, a $100 million project that will create 200 jobs. Phase 2 of the development is currently being marketed, offering a total of 250,000 square feet in two additional buildings capable of accommodating tenants as small as 20,000 square feet.

Ivey recently announced that she is seeking re-election. Jobs, a growing economy, and prosperity that lifts the fortunes of all Alabamians is part of her campaign for a second elected term as governor. Ivey previously served two terms as state treasurer and then two terms as lieutenant governor before being elevated to governor in 2017 when Gov. Robert Bentley resigned.