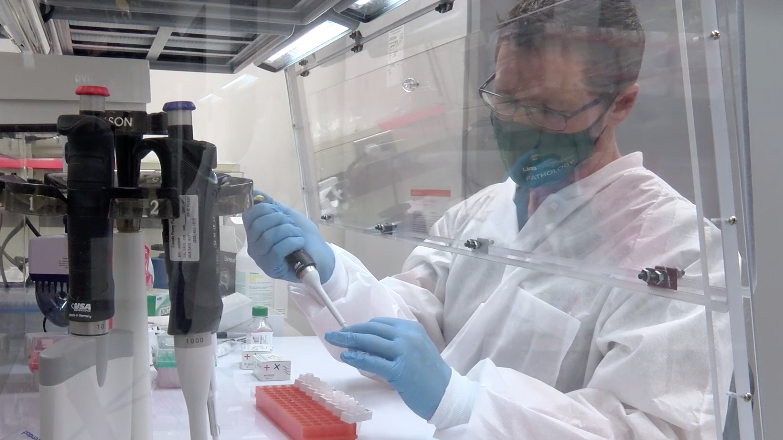 Nearly 71 percent of the last 48 COVID-19 samples sequenced at UAB’s lab were found to be the fast-spreading delta variant, lab manager Derek Moates told reporters on Tuesday, urging the public to get vaccinated.

“When individuals are infected with the delta variant, they are producing excessive amounts of virus,” Moates said. “Way more than we’ve seen with any of the other variants.”

Unfortunately, these high viral loads, combined with low vaccination rates are creating a potentially very dangerous situation for Alabama, Moates said, “and the only way to stop it from progressing is to get vaccinated.”

Those 48 samples taken from physicians’ offices and hospitals statewide between June 29 and July 8 are an indication the delta variant is much more prevalent across Alabama, Moates said.

Next door in Mississippi, State Health Officer Dr. Thomas Dobbs, in tweets Monday and Tuesday, said nearly all new cases in his state are the delta variant, and that seven children were hospitalized with COVID-19, with two on ventilators.

“We usually have a large group of positives, and of that large group, we have a very small amount that they were actually able to sequence,” Moates said. “Currently, I’m able to sequence probably 97 percent of the positive samples that I’ve seen.”

The delta variant is much more contagious than COVID-19’s original strain, and can be contracted in as little as five to 10 seconds of exposure, UAB’s Dr. Jeanne Marrazzo said last week.

“COVID-19 vaccines are our best defense in preventing serious disease as well as deaths, and this is especially important as the highly transmissible Delta variant spreads,” Alabama State Health Officer Dr. Scott Harris said in a statement. “While it is possible to get any strain of the virus, infected people are much less likely to experience complications or hospitalizations if fully vaccinated.”

Alabama has the lowest percentage of residents vaccinated against COVID-19 in the U.S. at 33.3 percent.

Alabama’s seven-day average of new daily cases Sunday was 373, a 174 percent increase from the post-winter surge low of 136, according to the Centers for Disease Control and Prevention.

On Tuesday, there were 321 hospitalized COVID-19 patients across Alabama, according to Dr. Don Williamson, president of the Alabama Hospital Association, in a message to APR on Tuesday. Tuesday’s hospitalizations were a 69 percent increase from two weeks before.

The Alabama Department of Public Health, which hasn’t updated hospitalizations on its COVID-19 dashboard since Friday, categorizes 26 of the state’s 67 counties as “very high risk” due to increasing cases in those counties.

“I don’t want to think about what the next step is after delta. I’m hoping we’re able to get enough people vaccinated so that we can prevent the evolution of this virus into something more heinous than what it currently is, which is pretty bad already,” Moates said, adding that we don’t want the next variant to come from Alabama because the state has been complacent in our vaccinations.

Gov. Kay Ivey said last week, the day before Alabama fell from second-worst vaccinated state to worst, that she would not ask for help from newly-formed federal COVID-19 surge response teams, which are now working in Missouri, Nevada, Illinois and Arkansas supporting vaccination, testing and therapeutics work.

Those federal teams are also assisting with epidemiology, data analysis, field investigations, and other public health response work in states that request the help.

“Governor Ivey has no plans to put in a request for government workers to knock on people’s doors here in Alabama,” Ivey’s press secretary Gina Maiola told APR last week.

Similar pushback against these teams came from Congressman Barry Moore, R-Alabama, and from Missouri Gov. Mike Parson, who on July 8 in a Facebook post wrote: “I have directed our health department to tell the federal government that sending government employees or agents door-to-door to compel vaccination would NOT be an effective OR welcome strategy in Missouri.”

Moore in a social media post said federal help is not needed.

“Let me be clear – the federal government is NOT our doctor or parent. The vaccine has been readily available for several months. It’s NOT the government’s job to knock on doors and force the vaccine on people; Americans have the freedom to choose. Why is it so hard for the Left to accept that?!” Moore said.

Jeff Zients, the White House’s COVID-19 response coordinator, was asked about Parson’s comments last week, and said federal efforts to persuade people to get vaccinated rely on “trusted messengers,” such as local doctors and community leaders, according to the Ohio Capitol Journal.

“For those individuals, organizations, that are feeding misinformation and trying to mischaracterize this type of trusted messenger work, I believe you are doing a disservice to the country and to the doctors, the faith leaders, community leaders and others who are working to get people vaccinated, save lives and help end this pandemic,” Zients said.