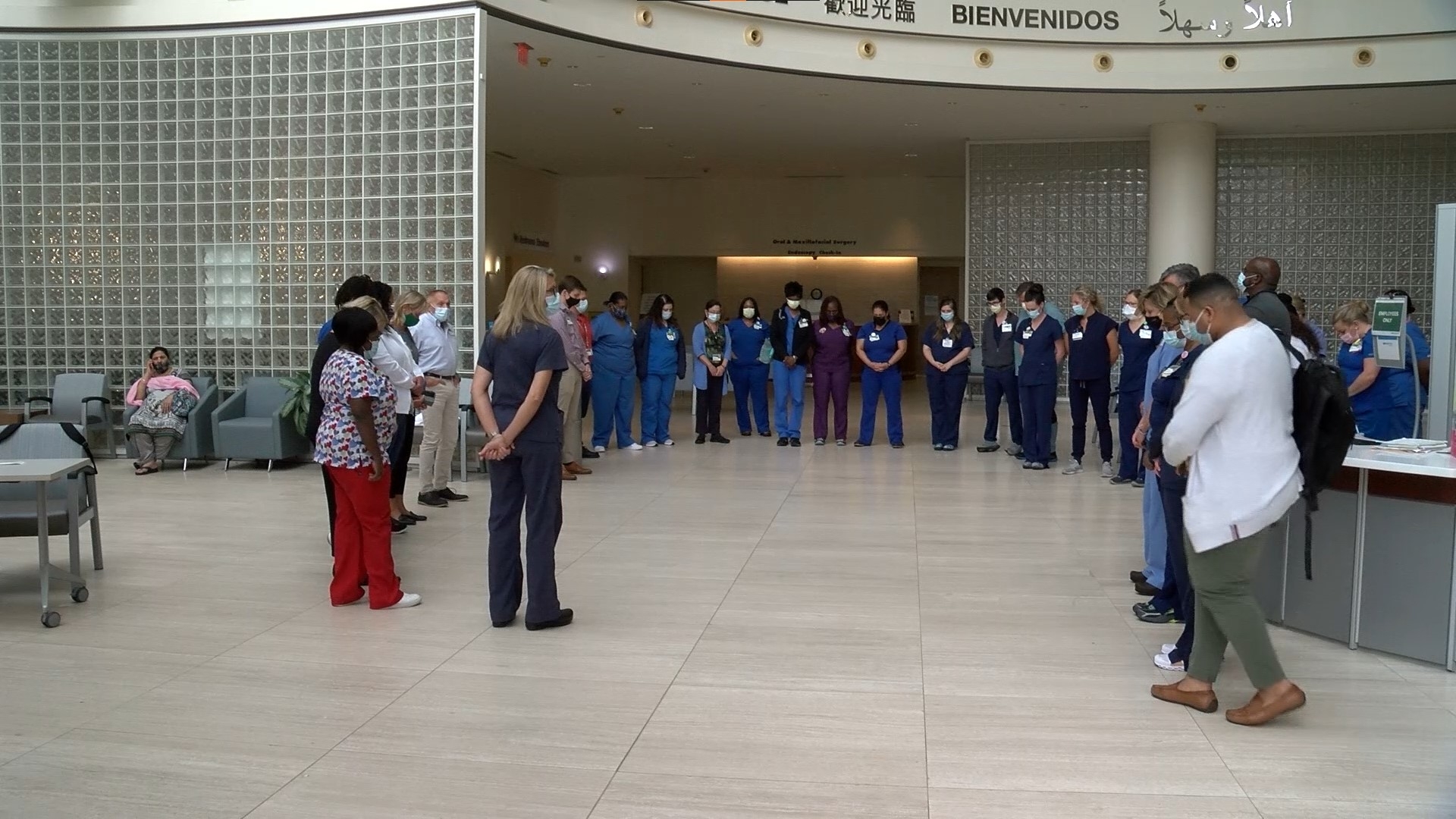 Workers at UAB's Kirklin Clinic in a moment of silence Tuesday. (UAB)

At noon on Tuesday, staff at UAB’s Kirklin Clinic in Birmingham, and in hospitals across the state, joined with others in a moment of silence in honor of those lost to COVID-19, those still ill with the virus and the medical workers who fight daily to save lives.

Bjornstad said that as a pediatrician, she’s not seen the same level of COVID-19 deaths as her colleagues who treat adults, but said the stories they tell her are heartbreaking.

“I’ve had colleagues who had to call time of death on three family members in the same day, and then go back the next day and do it all over again,” Bjornstad said. “It’s just devastating for the families, but also for the healthcare workers that are having to deal with it in and day out.”

During the first year of the pandemic, more than 3,600 health care workers died of COVID-19 in the U.S., Bjornstad said.

During the last seven days of August, 27,684 Alabamians became infected with COVID-19, according to Alabama Department of Public Health data. That was a 231 percent increase from new infections during the last week of August last year, and just 15 percent shy of the state’s largest seven-day count for new infections, set during the seven-day period ending Jan. 3.

There were 2,875 hospitalized with COVID-19 statewide on Tuesday, just 209 shy of the state’s record high, set on Jan. 11. Of those hospitalized Tuesday, 84 percent are unvaccinated, according to the Alabama Hospital Association.

Alabama on Tuesday had 181 more patients needing ICU care than the state had ICU beds, according to the association, meaning while some hospitals had open beds, still others had patients waiting on beds.

Many hospitals have reduced medically critical elective surgeries and converted other areas into ICUs to try and ease the pressure on hospitals the growing number of COVID-19 patients present. Of those in ICU beds on Tuesday, 52 percent were COVID-19 patients, according to the association.

During the month of August, 704 Alabamians were confirmed to have died from COVID-19, 33.5 percent fewer than the 1,058 COVID-19 deaths during last August, but it takes time for the department to review medical records and conduct the interviews needed to confirm a COVID death, so last month’s number will likely increase in the coming days as more deaths are confirmed.

“This is a call to action. There’s a light at the end of this tunnel. This dark period,” Bjornstad said. “We have great tools at hand. We have incredibly effective vaccines. Not just one vaccine. Multiple, effective vaccines out there.”

“We know that masks work. Masks help us protect those who can’t be vaccinated, so there is light at the end of this,” Bjornstad said. “We must pull together.”