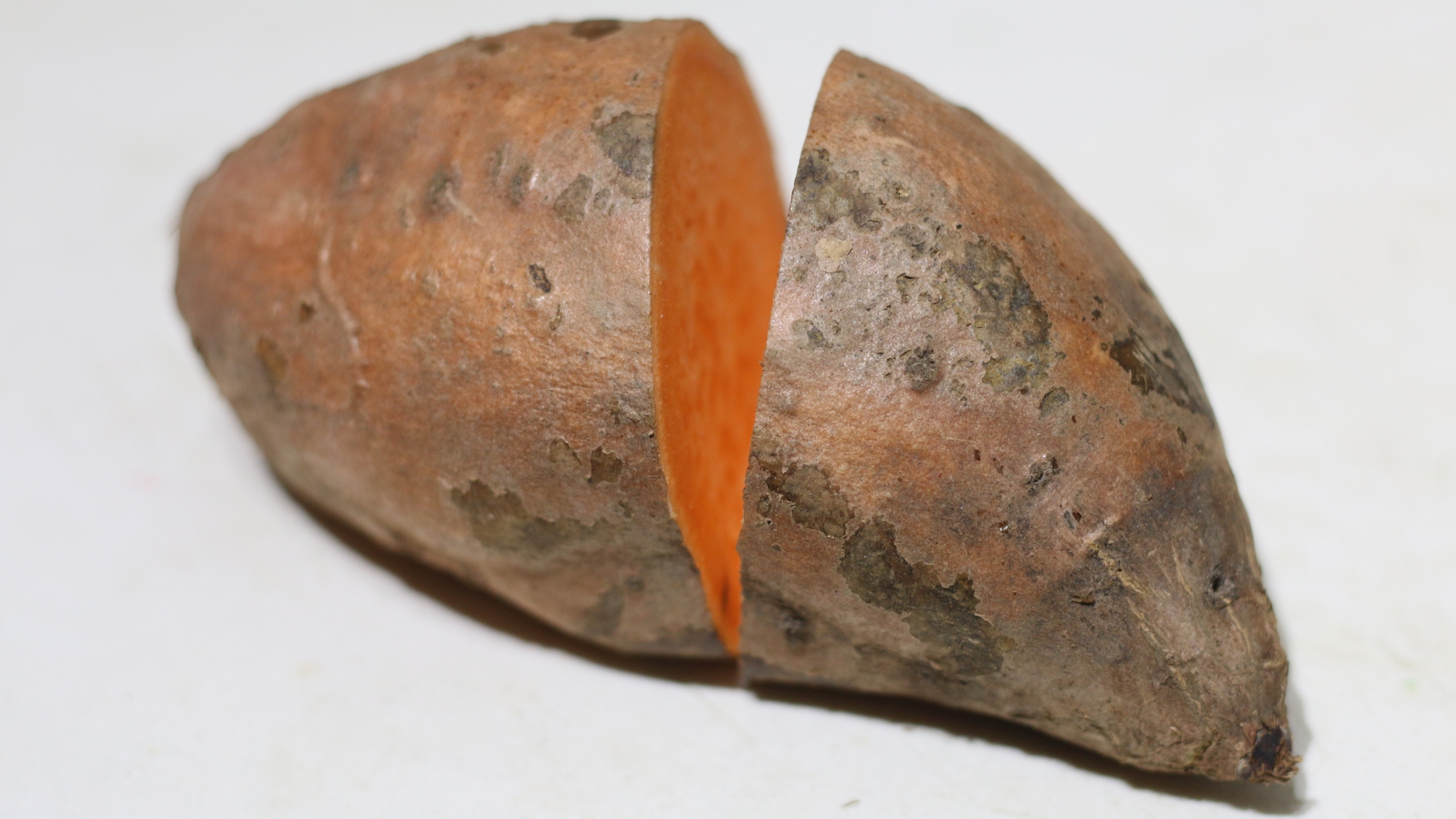 Sweet potatoes are a small but established crop in Alabama. (MICAH DANNEY/APR)

In some ways, the changing climate stands to make Alabama more hospitable to the sweet potato, which was declared the state vegetable in April. But crops may be threatened by certain cascading effects of the planet’s atmosphere warming, especially more frequent and severe rainstorms.

Sweet potatoes aren’t a large crop in Alabama. Just over 2,000 of the state’s 8.3 million acres of farmland are devoted to growing them. Still, it’s a popular vegetable and growers sell much of their yield locally. Commercial growers are clustered in two counties, Baldwin and Cullman. Quarantine restrictions in other counties meant to stop the spread of the sweet potato weevil, the plant’s insect nemesis, have led to smaller growers giving up on the crop.

The root originated in modern-day Ecuador and Peru and was introduced to America hundreds of years ago. It is well-adapted to hot, dry conditions and prefers loam soil, a mix of mostly sand and silt with some clay, because it drains well. It’s nutritious — high in beta carotene, which the body converts to vitamin A, and not very high in sugars. As a crop, it’s pretty low-maintenance.

“Growers take a single cutting, unrooted — what’s called a plant, a cutting, a slip — and just stick that in the soil and give it a little bit of water and it grows. And there are very few other crops that have the capacity to do that,” said Craig Yencho, a researcher at North Carolina State University who specializes in sweet potatoes.

As a tropical plant, it is tolerant of high temperatures, so the Alabama heat provides a long growing season. Sweet potato crops are well-positioned, then, for the state’s annual average temperature to continue increasing as it has over the last 50 years. Unlike vegetables like tomatoes, whose fruiting can be impeded when temperatures exceed 90 degrees for sustained periods of time, sweet potatoes continue accumulating starch and their other constituents underground unhindered.

What they’re not safe from is too much water, especially the amounts that Alabama has experienced in rainfall this season. Storms dump a lot of rain in a short amount of time, which can devastate an entire crop if a field floods and stays that way for more than 24 hours. Stagnant pools of water can become anoxic, or oxygen-depleted, which affects sweet potatoes’ flavor and provides a medium for pathogens to breed in.

With tropical storms becoming more frequent and more severe, this aspect of climate change is probably the most immediate threat to sweet potato growers.

“Hurricanes typically come in during harvest time,” Yencho said. “After you planted the crop, you’ve put out all this money, time, effort and now you’ve got a major storm that comes in and dumps 7-10 inches of water on you. It’s hard to recover from that.”

That’s something of a reality for Clark Haynes, a third-generation farmer in Cullman County. He just started harvesting and so far, his yield looks to be about half what it would be in a normal season.

“I’ve been farming all of my life and this has definitely been the most rain we’ve ever seen for the whole season, from start to finish,” he said.

The Haynes family has a few other crops and some cattle, but sweet potatoes have always been their main crop. They have about 200 acres planted with it. In the lower areas, water collected during downpours and remained for several days, sometimes up to a week. The plants there grew only roots, no potatoes. Haynes hopes the yield will improve as the harvest continues but if it keeps going like it started, it’ll be the worst crop his family has ever had.

Another Cullman County farmer is Travis Kress, who also serves as secretary of the Alabama Sweet Potato Association. While last year set rainfall records, this year is even more of an outlier, Kress said.

His farm’s planting and harvesting schedule has shifted later than it used to be. That hasn’t affected the sweet potato crop yet, but it’s noticeable, he said.

“I’m not ready to make a management decision based on that but I think it’s something that needs to be kind of paid attention to,” Kress said.

Haynes said he doesn’t hear much conversation among farmers about whether such changes are part of larger trends that are attributable to climate change. Some of that may be because of personal politics, he said, but more so because of a lack of clear information.

“We all kinda discuss that a little bit but since we don’t really know, we don’t talk about it a lot,” he said.

Climate change is often discussed in terms of warming temperatures and sea level rise, but weather variability and extremes — in rainfall, in temperature, in storm frequency and trajectory — are what a rapidly warming atmosphere will look like in Alabama, according to Pam Knox, an agricultural climatologist at the University of Georgia who studies the southeast United States.

While data since 1970 shows no strong trends in average annual or growing-season precipitation, the southeast region overall is seeing a 27 percent increase in heavy rain events that drop two inches or more in a day over the number of such events in the early part of the last century.

While the number of heavy rain days has increased over time, the number of dry periods between those events has also increased, Knox said. That’s a bigger problem for industries like Alabama’s largest vegetable crop, corn, than for drought-tolerant sweet potatoes.

As to how this is projected to change in the coming years, there’s no easy answer. Precipitation is harder to predict than something like temperature because it requires more localized data. Some models say it will get wetter, others say drier.

What can be counted on is unpredictability, and that may be the biggest threat to Alabama’s sweet potato crops because farmers can’t plan properly, according to Joe Kemble, an extension vegetable specialist at Auburn University College of Agriculture.

Unanticipated weather extremes can stress crops and affect them later in the season, as the Haynes farm is experiencing. Sweet potatoes can rot in wet fields, or they may not cure or store well, which could prevent them from being brought to market.

Rainfall also depletes soil nutrients faster, which farmers may not recognize right away. It affects how often they need to fertilize and how much they use, which can become expensive if done to compensate for frequent rainstorms.

Hurricane projection modeling is also unreliable. Scientists can’t say whether they will be more frequent or by how much, but Knox said they have been intensifying more before they hit land and have been slowing down, which means they’re dumping more rain along their paths.

Farmers will have to continue to contend with year-to-year variability regardless of any long-term trends of climate change, she said. Their economic concerns depend on what happens in the next year or two rather than 30 years out, but long-term trends will require decisions about what crops and varieties to grow and what equipment to use.

Yencho breeds sweet potatoes. It’s a difficult plant to breed and there are only a handful of programs in the U.S. that do it, he said. It requires investment to produce new varieties that are better adapted to new conditions, and it takes time — eight to 12 years, typically.

With climate change generally accelerating faster than predictions have estimated, it may be too difficult for some growers to keep up. Louisiana used to have a large sweet potato industry, but Yencho said a strong argument can be made that the pummeling the state has taken from hurricanes in recent years is the reason it has shrunk.

When Kemble talks to farmers about their crops, the future and what’s driving the realities they’re living, he takes care to not provoke politically ideological reactions.

“I’m cautious in the way I word it,” he said. “So I may not say climate change, but I’ll probably tiptoe around it and say just about anything else.”

In this article:climate change, farmers, Featured