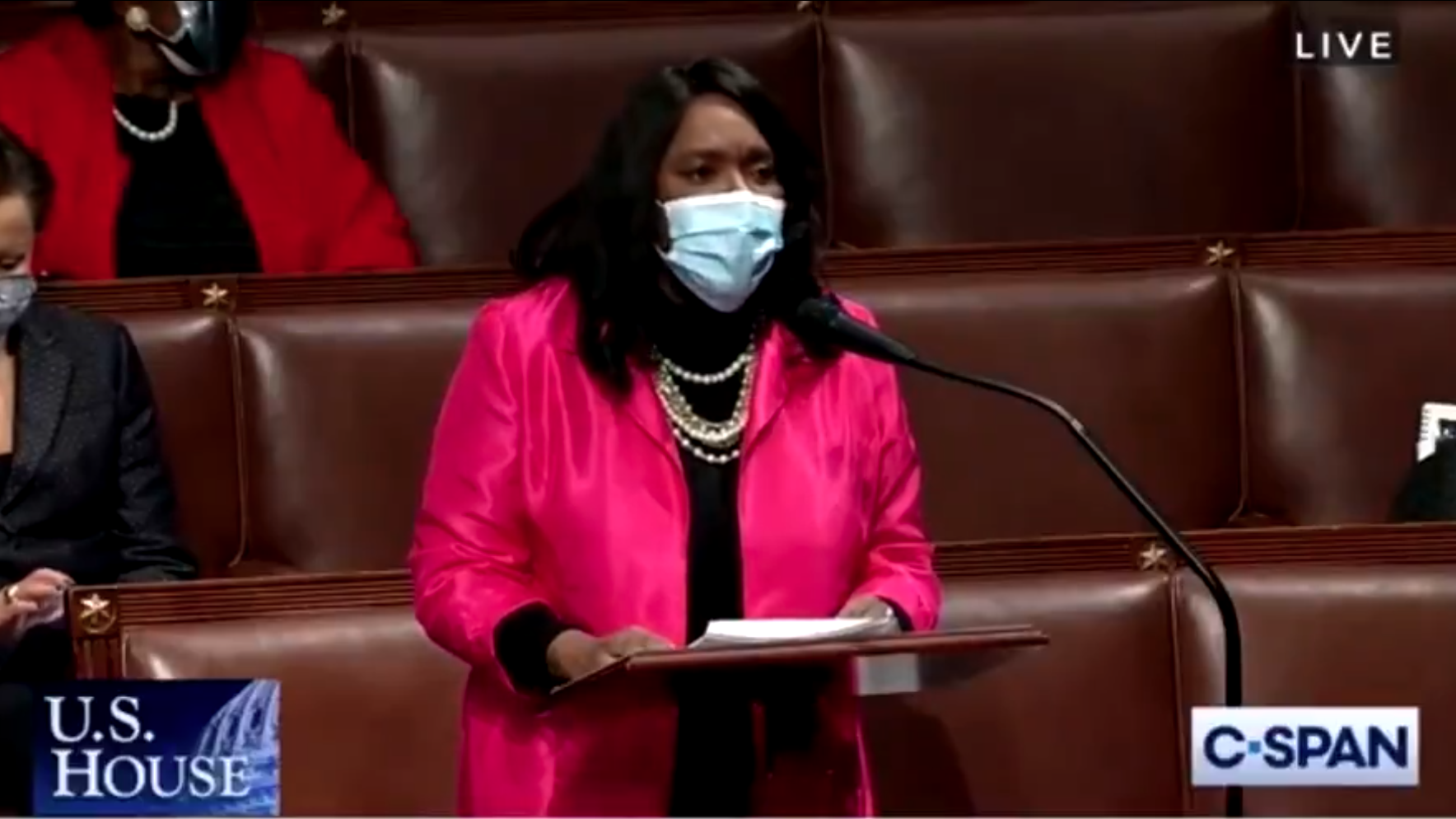 Congresswoman Terri Sewell, D-Alabama, speaks on the floor of the U.S. House of Representatives during a debate in January 2021. (VIA CSPAN)

Congresswoman Terri Sewell, D-Alabama, on Tuesday expressed opposition to a plan by the Alabama Legislature to use $400 million in federal COVID-19 relief funds from the American Rescue Plan to build new prisons.

“In March, I proudly joined my Democratic colleagues in voting to pass the American Rescue Plan, transformational legislation designed to protect our people and rescue our economy from the COVID-19 pandemic,” Sewell said in a statement. “The package included critically important relief for Alabama workers, families and businesses, and over $2 billion for the State of Alabama to aid in its COVID-19 response.”

“I am deeply disturbed to learn that the State of Alabama is considering a plan to use $400 million of COVID-19 aid from the American Rescue Plan to build prisons, especially as COVID-19 rages on in our state!” Sewell said. “Alabama currently has the highest COVID-19 death rate in the country. To be clear, the current state of the Alabama prison system is abhorrent, but the use of COVID-19 relief funds to pay for decades of our state’s neglect is simply unacceptable.”

The Legislature is currently in day three of a special session to address the prison issue.

The U.S. Department of Justice is presently suing the state of Alabama, demanding that the state do something about its’ dilapidated prisons – the most dangerous prison system in the entire country. The state of Alabama has not built a new prison in decades.

The Justice Department contends that the endemic violence in the system, the long history of the Alabama Department of Corrections refusing to do even basic maintenance on the prisons, the chronic understaffing, the lack of hospital beds for the aging prison population, and the grossly inadequate mental health services for incarcerated people in the system all taken together constitute a “cruel and unusual punishment” banned by the Eighth Amendment to the U.S. Constitution.

The Legislature is considering a five-bill package to address the issue. House Bill 5 is sponsored by state Rep. Steve Clouse, R-Ozark. HB5 appropriates $400 million of the $2 billion in American Rescue Act money that Congress has given the state to build a megaprison for men in Escambia County.

HB5 received a favorable report from the House Ways and Means General Fund Committee, which is chaired by Clouse, on Tuesday. Clouse was asked about opposition to the plan by Congressman Jerry Nadler, D-California.

“No one in our congressional delegation raised an issue,” Clouse said hours before Sewell released her public statement late Tuesday.

Clouse insisted that using the money for prisons is legal under the American Rescue Act.

“The category we used is how much money we lost in the pandemic,” Clouse explained. “There were two conditions: you can’t use these funds to fund a tax cut or prop up a state pension fund.”

Clouse told the committee that the overcrowded prisons with barracks-style housing made it impossible for the Alabama Department of Corrections to slow the spread of COVID within the prison population or segregate the infected incarcerated people from the rest of the population. He maintained that the new prisons with cells will improve ADOC’s ability to control disease spread.

The state has lost 14,155 citizens to COVID-19 through Tuesday. To this point .289 percent of the population of Alabama has already died from COVID-19 – the fourth-highest rate of population loss from COVID-19 in the country trailing only Mississippi, New Jersey, and Louisiana. Mississippi’s .32 percent loss is the worst in the nation.

Much like Mississippi, coming into the global pandemic the state had high rates of obesity, diabetes and heart issues – all factors which greatly increases the likelihood of a poor outcome from COVID-19. The FDA has given emergency approval for three vaccines that have been shown to be effective at decreasing the likelihood of getting COVID-19 and of avoiding the worst outcomes from COVID-19, going on a ventilator and death, if you do get COVID-19.

Gov. Kay Ivey has been vaccinated and is strongly urging that everyone who is eligible to get the vaccine. The governor and Alabama Attorney General Steve Marshall, however, oppose any vaccine mandates. Marshall recently wrote a letter to UAB notifying them that any use of the state vaccination database for enforcing a vaccine mandate for employees is illegal under Alabama law.

Unlike other states whose economies were damaged by the COVID-19 crisis, Alabama has had record revenues in both its Education Trust Fund (ETF) and state General Fund (SGF) budgets. Both budgets are at all-time record highs and unemployment is at just 3.2 percent.

Classic economists consider anything below 5 percent unemployment as “full employment.” In fact, many employers are facing a worker shortage. The state was given $2 billion in American Rescue Act money, but has no budget shortfalls and the money can’t make Alabamians get their COVID shot any more than it can make them take their diabetes and blood pressure medications.

The full state House of Representatives will consider appropriating the $400 million for the prison today along with the other four pieces of legislation that were part of the governor’s special session call.

The state Legislature is also considering a $780 million bond issue to build a men’s megaprison in Elmore County and then begin a process of prison upgrades that include renovating prisons in Jefferson, Limestone, and either Barbour or Bullock County. There are also plans to build a new women’s prison facility to replace the Julia Tutwiler facility built in 1942.

State Rep. Napoleon Bracy, D-Prichard, asked, “Do we have a plan B?”