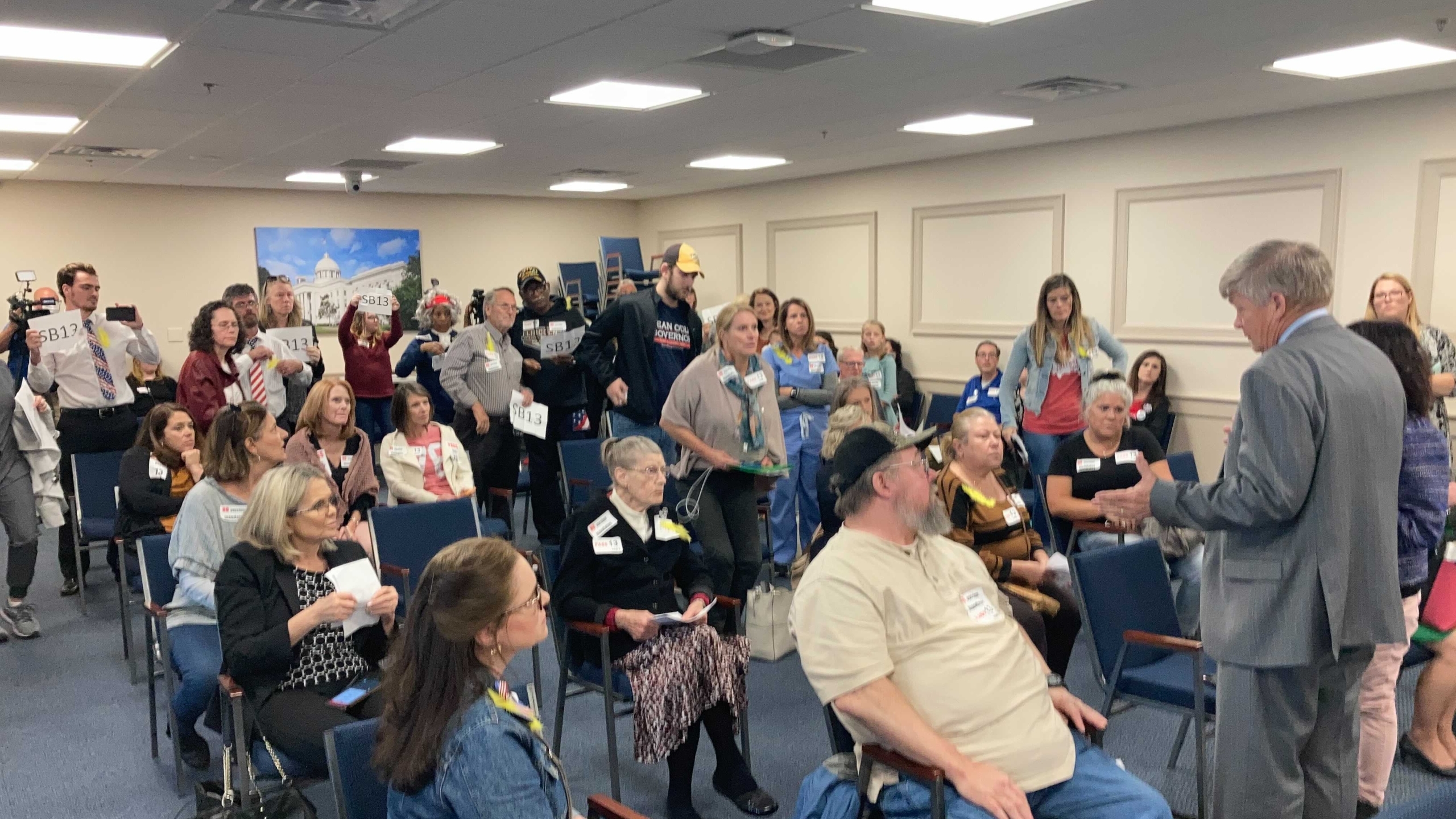 Members of the public at a Senate committee meeting over anti-vaccine mandate bills. (JOHN H. GLENN/APR)

The Business Council of Alabama on Tuesday said anti-vaccine mandate bills making their way through the Alabama Legislature this week cause confusion and put jobs at risk.

The Alabama Senate on Tuesday passed Senate Bill 9 and Senate Bill 15, both aimed at curtailing the federal government’s ability to mandate some workers are vaccinated against COVID-19.

“The current vaccine mandate bills moving through the Alabama Legislature cause confusion and place Alabama employers in a no-win position by forcing them to comply with conflicting state and federal laws,” the BCA said in a statement.

The BCA opposes mandates on employers, such as Senate Bill 9, saying it would prevent Alabama employers from making personnel decisions and place that authority in the hands of state government.

“The BCA has confidence in Alabama’s employers and their ability to make sensible decisions that create and sustain jobs. The Legislature is constricting Alabama’s federal contractors and putting current and future jobs at risk. BCA will continue to fight federal and state mandates,” the statement continues.

“The only effective way to challenge and defeat the federal vaccine mandate is vigorous action through the court system. Those efforts have been initiated by the Alabama Attorney General and supported by Governor Ivey. BCA commends their initiative and lends our voice to their efforts,” the BCA said.

President Joe Biden’s executive orders will require federal workers and contractors to be fully vaccinated by Dec. 8. The Occupational Safety and Health Administration is expected to release a rule as early as this week that will require all employers with more than 100 workers to require employees to be vaccinated or test them weekly, according to a separate order from Biden.

Senate Bill 9, sponsored by State Sen. Chris Elliot, R-Fairhope, would prohibit employers from requiring COVID-19 vaccines if an employee objects to taking the vaccine because of “a religious belief or because of medical reasons, including recovery from COVID-19,” the bill reads.

The business community’s pushback against these bills are at odds with support from some Republican lawmakers who say the legislation is critical to fighting federal overreach. Vocal supporters of the bills have attended legislative committee meetings this week.

Democrats have argued in committee meetings and on the Senate floor that the bills are simply to appease a few but at the jeopardy of placing many more at risk from COVID.

Gov. Kay Ivey in a Tuesday statement stopped short of saying she supports the anti-vaccine mandate bills introduced in the special session, which she called to handle redistricting and allocating $80 million in federal COVID aid to state hospitals and nursing homes.

“While the primary purpose of this special session is redistricting—and it appears the Legislature is making good progress on this important issue—it is obvious the Biden Administration’s unprecedented and overreaching vaccine mandates are also getting a lot of attention—and for good reason,” Ivey said in the statement.

“My executive order—and the lawsuit I joined this past weekend in federal court—are important first steps in slowing down this unwarranted federal mandate. We are carefully tracking the various bills and amendments being debated in the Legislature and are hopeful to see legislation emerge that serves the people of our state in this important and complex area,” Ivey said.

“The Biden administration’s vaccine mandates are a reckless federal government overreach that infringe on Alabamians’ liberty and freedom of personal choice, and could cause significant economic harm to Alabama and Americans across the country,” said Senate President Pro Tem Sen. Greg Reed, R-Jasper, in a statement. “Our state has already taken several steps to combat these mandates through an executive order issued by Governor Ivey and a lawsuit filed by the Attorney General’s office, of which I fully support.”

“Now the Alabama Senate has exercised its responsibility to the people of Alabama by passing legislation out of the Senate that will help ensure that Alabamians won’t have to make the choice between taking a vaccine they don’t want and losing their livelihood and personal freedoms,” Reed continued.

Elliot, who sponsored SB 9, in a statement, said the decision to get the vaccine or to not get the vaccine is a personal choice that should be left up to the individual.

Orr, the sponsor of SB15, said his bill expands on Alabama’s “vaccine passport” ban, which prohibits state and local governments from issuing vaccine passports or any other standardized document that certifies a person’s immunization status. The law also prohibits people from being denied access to schools, universities, businesses and state agencies if they have not received COVID-19 vaccination. The law contains no enforcement mechanism, however.

“This bill will strengthen that vaccine passport ban by giving the office of the Attorney General an enforcement mechanism to make sure that this law is being followed,” Orr said of his bill.